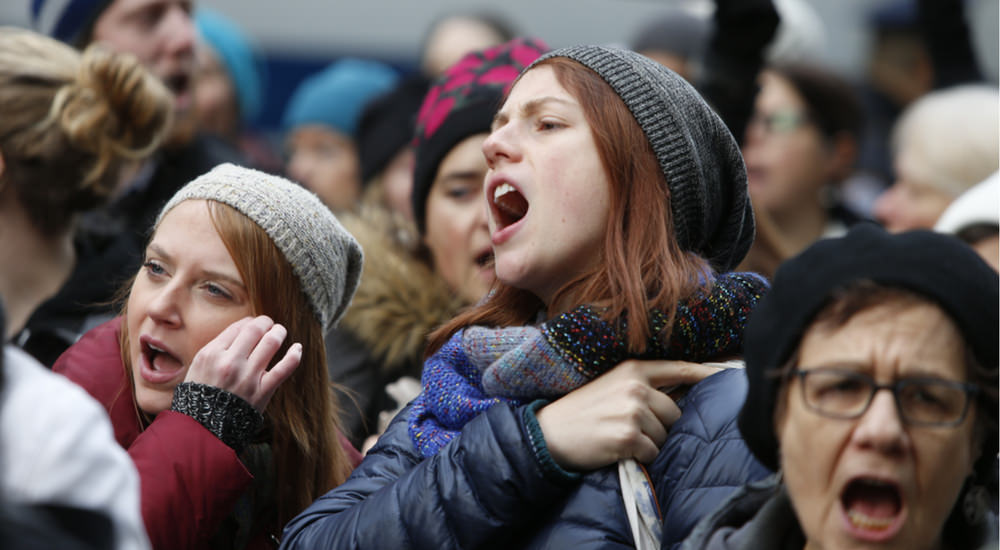 Thanks to the Women’s Rights March on Saturday I now know that I have the right to speak, to be heard by those in authority.  I probably would not have known that if I hadn’t seen the women in costumes that represented our vayjays. I now know that my right to reproduce is protected by 5 million women.

I am sure that my four children and three grandchildren are sleeping better at night now that awareness has been brought to the administration regarding my right to reproduce.  If they hadn’t marched, I guess maybe I would have needed to get a license or something stating that the government was alright with me birthing a small clan.  I suppose I owe these women a great debt for letting the world know that I want to be heard.

Gloria Steinem does not speak for me…nor do you.  I do not choose a group of women who want the right to control their own bodies AFTER they got pregnant.  The time to say no to “The Man” is before you have sex with him.  You see yourselves as a strong, empowered group of gals. So why are you asking the government to fund your inability to control your body in the first place?  Do I see a little princess mentality here?  “Please Mr. Government save me from my inability to keep from getting pregnant?” Whoops, I forgot…maybe your cause is so righteous that the majority of abortions that need to be funded were immaculate conceptions over which you have no control?

I know, I know. I am a heartless, judgmental woman that does not understand the struggles that are happening to our sex.  Did I mention that I raised four children primarily as a single mother?  No? Oh, then maybe I also forgot to mention that I did so because my husband was physically abusive… Yeah… the police gave me a restraining order and said that if I didn’t use it they were afraid that they would be coming for me in a body bag.

I can see you nodding, finally understanding that my lack of promoting “Our Cause” is because I am a wimpy door mat.  Thank you for helping me to see that.  Maybe that is why the abuser was kicked out. Why I taught at Juvenile Hall. Why when my son’s friend ran away from home with stories of being abused, my son insisted that I be notified: “My mom will do something about this.”

Now I imagine you ignoring my last paragraph and jumping up to the comments I made about women protecting themselves from getting pregnant.  “How dare she?” you ask.  Don’t I know that women get raped, that girls are molested?  Since you asked I’ll tell you.  I do know…because I have been sexually harassed at work, I have been raped, I was molested when small.  Come on, girls, you should have done the math. Abused wives often come from abusive homes.

About now you may be wondering why I assume that I know what you would be thinking as you read this and I will tell you why.  I am returning a favor.  I am speaking for you as you spoke for me at the march, “our march,” the Women’s March.  You let the world know that I HALF the right to speak, you let the world know that you were standing up for all women’s rights, and because  I am a woman you were standing for me. But in so doing you angrily allotted me only Half a voice.

But I HAVE the right to speak. I have the right to tell you that the night our President was elected I broke down and wept.  Why?  Because I was experiencing a lifetime of relief.  Someone who wanted to PROTECT our nation was elected.  Someone was elected who cared whether or not extremists had the right to come and rape my children, someone who cared about the family of America— who refused to close his eyes on a genocide of unborn children, who cared about whether or not our people would lose their jobs to outsiders— stood up for our country .  When he stood up for our country he stood up for me!  And as Gloria Steinem so proudly asserted that she was sure  other women felt sexually harassed by his statements, I take the LIBERTY of asserting that I am sure that other women who have experienced profound neglect and abuse in their lives wept with RELIEF that finally someone stood up for us.

Is he rough around the edges?  Did he say things about women that he shouldn’t have said? Absolutely.  So maybe  you’re right… maybe I really am only owed HALF a say.    Lets go with that for a moment.  Since you are wise and I am foolish, permit the grasshopper to ask one question in closing.  It seems that President Trump apologized for his hurtful words about women.. when will you do the same and apologize for the emotional abuse that your legions spewed at him?