Imagine a World Without Borders but plenty of Checkout Separator Bars 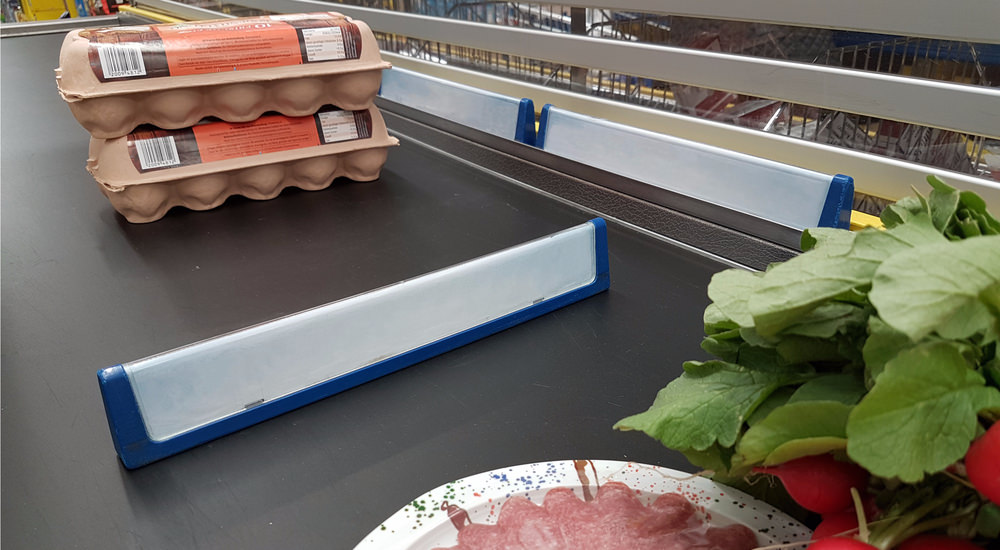 As I was waiting in line at my local grocery store, where I seem to spend much of my life now, I noticed that the person in front of me was nervous.

At the time I didn’t think my appearance was that frightening. Of course, every now and then my wife reminds me that I should take time to look in a mirror but since I was just back from school I thought I must look basically human. I wondered why this other shopper seemed so uncomfortable.

I then noticed that after she had put her groceries on the check-out belt she couldn’t find the plastic separator bar that determined the demarcation line where her groceries ended and mine would begin. After a couple of seconds a clerk ran up to the cash register and placed a bar between our purchases. This immediately had the effect of calming down the nervous shopper.

What mystical power these bars have acquired, I thought; these supermarket wands with mystical mood changing properties. It made me wonder why we didn’t use this power of the bar in other sections of our society? We could place them between the borders of countries, and because no-one would want their stuff mixed up with somebody else’s stuff, everybody would keep to the right side of the bar. I wondered if the leaders of The United States and Mexico knew about the power of the supermarket separator bar.

Here at home fences would no longer be necessary between neighbors. When someone purchased a parcel of land all they would have to was to mark off the property lines with a few separator bars. When it was time to sell the property all the lawyers would have to do is visit the property and see where the bars were placed. Then they wouldn’t have to charge such egregiously high prices at the closing.

Locks would become obsolete. To protect our homes and families all we would have to do is circle our homes with these magical bars and no thief would dare cross over them.

Our state governments could save hundreds of millions of dollars by getting rid of all prisons. We could place these bars around dangerous people and undocumented people in order to separate them from law-abiding citizens. They wouldn’t dare cross over the line so we would save money by eliminating the need for prison guards and I. C.E. agents

There would no longer be any accidents in parking lots. All we would have to do is place the bars in a specific order so that no other car would dare trespass over into another parking area. The use of these separator bars could also eliminate the necessity for a garage or a shed in order to safely store one’s tools and machines.

Barbed wire fences would no longer be necessary to protect nuclear power plants, military bases, or industrial properties because all we would have to do is surround these areas with the separator bars so that their security could be guaranteed. In fact, we would no longer have to expend $24 billion in order to protect our southern border. I am sure we could find another need for this amount of money.

Police and Fire Departments could also use these bars instead of the yellow plastic ribbons at fire scenes or crime scenes. No one would dare cross these lines unless they were part of the investigation.

The fear that parents of teenagers have when their children go out on dates could be alleviated by placing separator bars on the car seats. Teenage pregnancies could be all but eliminated and abstinence finally triumph over the basest impulses in human nature.

Restraining orders would no longer be necessary to protect people against stalkers, pests or unwanted suitors. In the past when people were afraid that some unwelcome person might approach them they had to go to court and have a restraining order granted by a judge. Instead a person could carry a separator bar with them at all times to ward off anyone attempting to violate their space.

Bank vaults and safes would become irrelevant. Money and expensive inventory could be protected by the strategic placement of separator bars.

Office cubicles would no longer be necessary. All a business would need was a large open room with separator bars determining where one office began and another started. Just think of all the money that would save on those fuzzy walled room dividers.

As an infinite number of possible uses for separator bars streamed through my head I was sharply brought back to reality by the checkout clerk asking if I was alright. It seems I was staring blankly into space and holding up the line.

I answered that I was fine but was unable to place my groceries on the checkout belt because I couldn’t find a separator bar. The nice young woman looked at me with something approaching pity then found a separator bar and put it on the belt and I immediately relaxed.

A few minutes later I left with my groceries thinking what a wonderful daydream I’d just had; and how wonderful it would be if supermarket separator bars really did have magical powers to extend beyond the checkout line, out of the building and into the parking lot and make human beings everywhere respect each other and each other’s property.