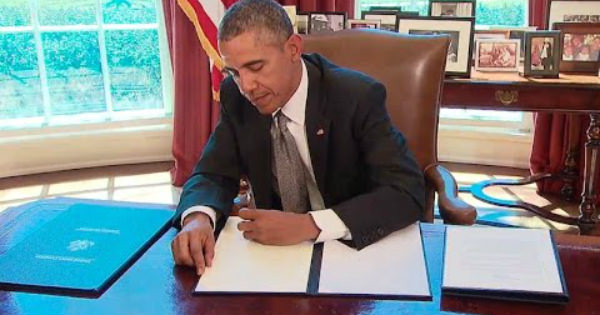 Twas the night before Christmas, and all through the White House, a creature was stirring, but it was not a mouse. Obama himself was hanging the American people out to dry with care, in hopes that his radical and tyrannous leftist friends would soon be there.

Unfortunately for Obama, America chose a different route. They chose Donald Trump to lead them through their next bout. For this reason, the American people will be empowered to, reverse these dictatorial power-grabs for the benefit of YOU!

Yes my fellow Americans, Obama has once again betrayed us, the American people. This time he has signed into law the National Defense Authorization Act (NDAA) for 2017, which will help the lying United States government in continuing to lie to the American people. NDAA has been an annual part of American legislation for years now, and it is mainly dealing with the means in which the United States government can legally go about combatting its enemies. It has historically been a legislation which has infringed little-by-little on American’s rights and freedoms in exchange for security of the nation. NDAA 2017 is a little different thou and the so-called “Countering Disinformation and Propaganda Act” was included in the NDAA with a simple stroke of Obama’s pen.

The issue which the American people should have with this broad-stroke of Obama’s pen, is that we have seen with our own eyes that the U.S. Government (outside of the Trump camp) is publicly and openly saying that it is the mainstream media is legitimate and newsworthy. The only problem with this is that America saw with their own eyes through the Presidential Election in 2016 that the mainstream media outlets are actually those which are providing disinformation and propaganda to the American people. The people of the United States largely saw exactly what the media outlets and establishment politicians were trying to do by slandering and sometimes straight-up lying about Mr. Trump, and they clearly tuned the propaganda and disinformation out, tuned honest independent media in, and made their own decision.

This is progressively growing towards mass-censorship of American media and the freedom of press. If there was legitimate concern in America regarding the way “fake-news” effected the 2016 election, then that would be one thing. However, the only one’s making these claims of “Russian disinformation and propaganda” are Liberals who are upset that the Democratic Party lost the election. Honestly, this is reaching a point of insanity, and something needs to be done soon before our freedom of press and freedom of speech are annihilated at the hands of corrupt politicians who want nothing more than to stop the truth about their dealings to be shown to the American people.

In 2012, the Obama administration legalized propaganda with the repealing of the Smith-Mundt Act, however now they have taken it a step further and made sure that ONLY Liberal-leaning outlets are allowed to provide the American people with their information. So-called “fake-news,” which in actuality is just a term which Liberals have coined designating news which does not toe the Liberal-line, will be combatted under the new NDAA provision known as “Countering Disinformation and Propaganda Act.” Why not just re-enact Smith-Mundt? That was a legislation which worked for DECADES to stop propaganda to the American people. But Obama doesn’t want to that, because the repeal of Smith-Mundt gave the Democratic Party the legal means to lie to the American people. With this new legislation added to it, they can now lie to Americans, while at the same time accusing those who do not agree with them as “fake-news” and have their opposition shut down…LEGALLY!!!

The good news is that Donald J. Trump has vowed to repeal much of these anti-liberty dictatorial swipes of Obama’s pen by reversing his many executive orders and legislations which Obama’s admin arbitrarily passed during his reign of power, not just NDAA 2017. Let’s not be mistaken, Obama’s 8 years in office was a dictatorial reign of power where he and his political party known as Democrats, lied and cheated their way through all 8 of those years and condoned Hillary Clinton to continue to do so. Still to this day that particular political party is lying to America and passing dictatorial legislation without votes from Congress or any other democratic process, hence NDAA 2017 and  Countering Disinformation and Propaganda Act. No congressmen/ woman voted on this legislation…it was once again executively passed by a dictator-in-chief.