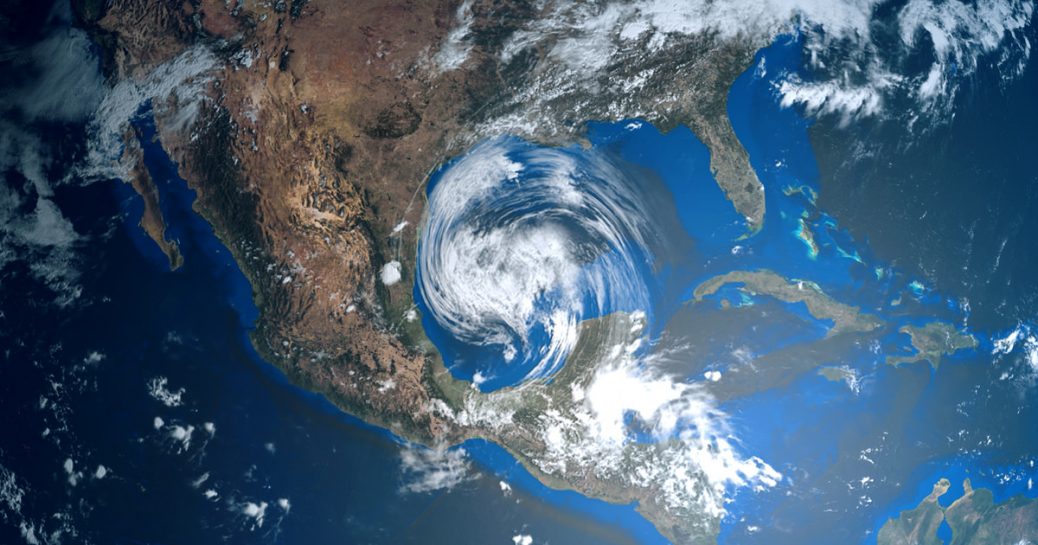 “Global Warming,” “Climate Change” boosters think they have a tool in hurricane Harvey, but it is a tar baby for them when the facts are known.

These monster storms are a natural product of the physics of the Caribbean as it is a shallow ocean and near the equator. The mechanism is simple, but like many natural things include variables that complicate understanding. The most significant of which is our government.

That the Caribbean is only 2/5th the depth of the ocean’s average and near the equator makes it a natural birther for hurricanes. They can form in open oceans if conditions are right, but that has not been very often for 12 years. This is a consequence of our 18 year solar temperature decline indicated by waning sunspots which are like bubbles in boiling water. The more of them you see the greater the heat in the system. We are now seeing nearly none.

Hurricane birthing conditions include: Days of clear skies and sunlight heating calm surface water that is not churning or “turning over,” that is, moving vertically. Then, a quick forming of deep cloud cover with lots of moisture which the days of heating have contributed to as water in any form is a great infrared, IR, energy absorber from sunlight. This is the devil’s cauldron of monster storms.

When the sky changes from clear to deeply cloudy and dark the sea becomes a heat source rather than a heat sink with most of it coming out as additional water vapor, as the medium of heat transfer.

Meanwhile Earth is spinning under this system and where the south side of the Caribbean is at 20 degrees North, 140 miles, north of the equator it is moving easterly at 809 miles per hour, dropping 11.6 mph for every degree we move north, which is 70 miles on Earth.

The top of the Caribbean is ten degrees further north so the water there is moving west at 693 miles per hour in space, 116 miles per hour slower than 700 miles south. It is this 116 mph difference in velocity in space that causes the counter-clockwise storm spin north of the equator while such storms forming south of the equator spin in the opposite direction. This is the Coriolis Effect. There is no fixed, or reference place, in space so it is due to inertia alone.

The mass of air in Harvey is on the order of one trillion tons. It is moving over 100 miles per hour and can blow buildings down, carry tons of rain per cubic mile and cause the great havoc we have seen. To blame this on “Global Warming” or “Climate Change” caused by man’s carbon dioxide is ridiculous. This mechanism has been defined for many years.

If these conditions are seen hurricanes are predictable, but this has been ignored by the National Oceanic and Atmospheric Administration as their thousands of Ph.D.s are all working on “man-caused global warming” because it can produce new taxes, a bigger bureau and more Ph.D.s to patch the myth. It is another enormous waste of tax money spent to create a taxable fable for a corrupt government that wants only to bleed the people.

Dr. William Gray, aka “Dr. Hurricane,” developed a system for predicting hurricanes, but apparently felt it was not sufficiently well defined or substantiated to publish before he passed on. It may have died with him unless he documented his work well and had an associate. We were associated with him briefly, but not his papers or plans and whether or not they are being seen to.

Nonetheless, the elements here are too basic for the mechanism to elude understanding and modeling if we ever get a government that does not think more of physical science than increasing its’ power over the people.