How Deep Is Our Swamp? 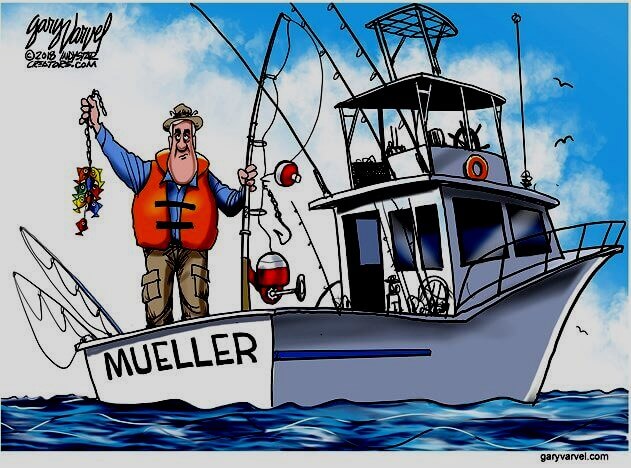 Robert Swan Mueller III is back to his habit of overcharging which has gotten him into trouble several times. It would have been professionally fatal to anyone but a high-born, Ivy League educated, Purple Heart decorated Patrician.  Bob’s oft promoted “high integrity” is as much a myth as anything written about any well-known swamp creature.

Bob’s first post as a Federal prosecutor was in 1970’s San Francisco.  He was assigned to prosecute the Hells Angels motorcycle gang for drug running, but botched the case with overchargings that failed in court.  Only five of the 18 he indicted were convicted.  And all five were overturned on appeal as the cases were so badly or falsely prepared.  Bob fled that crime scene for Boston.

In Boston and served as Assistant Acting U.S. Attorney in the 80’s. He hired Boston mob boss Whitey Bulger as an informant and the FBI handler, John Connolly, covered up for many horrific crimes committed by Bulger’s mob including a case in which four men were then wrongfully convicted for a  murder and spent decades in prison with two dying.  All were exonerated and awarded $101 million of taxpayer’s money!  Bob Mueller had suppressed exculpatory, exonerating evidence and used false evidence, but was never called to task for what were felonies again proving is good to be a patrician from the swamp.

Regardless his “Inspector Clueseau” history Robert Swan Mueller III was appointed Director of the FBI. When the Uranium One deal came with notes from the White House and Secretary of State, Bob saluted.  Being a loyal swamp creature Bob signed it off not considering Russia was up to no good as they have eight percent of the world’s uranium reserve and we have one percent.  Their taking 20% of ours increased their nuclear power economic advantage from 8:1 to 10:1 in a single sale!  Do this five times and we are naked in that market, a fact that should have caused questions in an Ivy League man with intelligence responsibilities.  One call to the CIA would have fully informed Bob.  Can we spell “s-e-l-l-o-u-t?” or “p-o-l-t-i-c-a-l” or “t-r-e-a-s-o-n?”

One would think Bob would be a humble man, given his spotty record, but that is not the case.  When he was selected for the Trump hit he called on all  the hard-left lawyers he could find.  Optimists said, “He’s doing that to show objectivity as these are serious career people!”  They were not and a more partisan bunch you will not find.

The lawyers hired by Bob Mueller had long contributed tens of thousands of Dollars to Democratic candidates, including President Barack Obama and Hillary Clinton.

The most notorious, Andrew Weissmann, was the Chief of the Justice Department’s criminal fraud section on the Enron fraud case and famous for destroying Arthur Andersen, LLP for only having worked for a corrupt corporation.  Accountants are not responsible for the validity of client’s books.  Nontheless…

Andrew Weissman convinced a Federal District judge to instruct the jury they could convict the firm whether or not Andersen employees knew they were violating the law.  That ruling was unanimously overturned by the US Supreme Court finding: “The jury instructions failed to convey the requisite consciousness of wrongdoing,” but the company was destroyed and 10,000 accountants were on the street.  Three other lawyers Mueller hired had given over $22,000 to Democrats and $2,750 to Republicans, an eight-to-one bias!

That Robert Swan Mueller has found no evidence of “collusion with Russians” in the 2016 Trump campaign for the Presidency was indicated when he indicted 13 Russian companies in a grandstanding move believing they would ignore said indictments and take him off the “show your hand” hook as well as generate lots of major media propaganda.  Unfortunately for Bob one showed with an American lawyer saying, “Put up and we want discovery!” which has to rattle Bob badly as his cupboard is not only bare but he has broken laws and legal canons by indicting on nothing!  This could be the end of one Robert Swan Mueller III, patrician, lawyer and DC swamp creature when attorneys for the Russian company set depositions and nothing is forthcoming!  Be sure:  Mueller will come up with another slimey trick.

Our government is incompetent or corrupt and run by Robert Swan Mueller III types as he was made Director of the FBI for a ten year term!  How deep is our swamp?