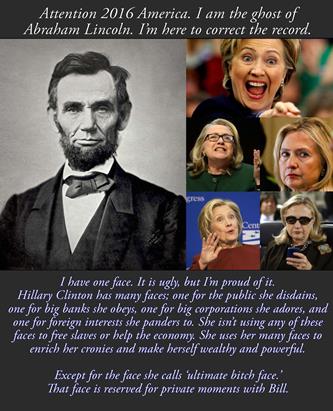 As cover-up of her duplicity and lies to the people between her “public” and “private” policy stands, Hillary Clinton has the gall to compare herself to “Honest Abe” Lincoln.  She uses Lincoln’s words about using different arguments to convince different people to support his policies.  To an ignorant liberal this might make sense.  But using different arguments to appeal to different people, who have different priorities, agendas, or beliefs, is not the same as Hillary saying one thing privately to her Wall Street donors and saying the complete opposite publicly to her voters.

Lincoln did not take opposite positions on the basis of the audience to whom he was trying to persuade to follow his policies.  Abe didn’t lie to both sides about his intentions.  When it comes to Hillary Clinton it’s not about helping the bankers or helping the people, but about helping herself.  She didn’t make her fortune by producing anything or providing any services to anyone.  She made her fortune by defrauding the public and pandering to bankers who greased her palm for political favors.

The tax code that rich people use to avoid paying the taxes that Hillary says would be “their fair share” was designed by the Democrat controlled Congress over the last century.  Conservative attempts to revise the tax code to be fair for the Middle Class during the 10% of the time they controlled Congress have been met by Democrat filibusters and propaganda.  Republicans have tried to rip Social Security out of the greedy hands of Democrats who began using those funds meant for senior citizen’s retirement in 1968 and spending it on their programs for their welfare voter slaves.

Democrats don’t understand how government gets its money and what it means to businesses when they steal their wealth.  Ignorant liberals believe Warren, Hillary, and Obama when they say businesses were not built without government assistance.  They have no clue from where people got money to pay taxes to enable the government to build schools, roads, and provide fire and police protection.  That Democrats are ever elected to power is a failure of America’s education system to teach students to understand how business works and not be taken in by charlatans, conmen, and thieves.

Warning to America: You can bet that if Trump wins and begins outing the corruption of the two political parties that the Democrats and RINOs will retaliate by crashing the economy and blaming Trump like the Democrats did to Bush when they nuked their mortgage banks.