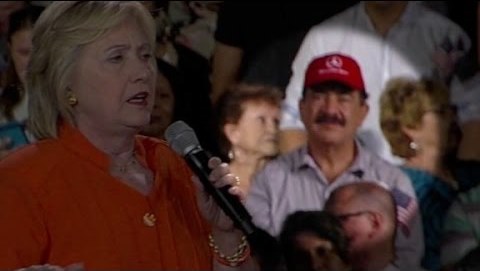 Leftwing racist hatred reaches Olympic proportions as Hillary accuses Trump of inciting rebellion.  Implying that 2nd Amendment supporters would revolt if she gets elected to appoint Supreme Court justices to abolish the Bill of Rights, Hillary believes she was scoring points with voters, but it only the America haters who support her overthrow of the Constitution.  As proof of Hillary’s wicked intentions, she invited the parents of BLM and Islamic jihadi terrorists to her rallies who call for more violence against white people and Christians.  This isn’t just two-faced rhetoric, it’s the threat of violence against the American people to establish the Democrat hegemony of tyranny through Sharia.

First it was her invitation to the mothers of Black Lives Matter criminals killed by police to speak at the Democratic Convention – the same people who not only have been calling for the murders of police, but committing those murders!  Now Hillary invites the Sharia loving father of the Orlando terrorist who murdered fifty gays in a nightclub not far away to sit with her at a rally in Kissimmee.  This is not courage and love of those less fortunate, but cowardice and betrayal of America in the face of the enemies of freedom.

Then came calls by the anti-Christian, racist Left for Michael Phelps, America’s and the world’s greatest Olympic athlete, to yield the American flag to a black Moslem woman because “he’s too white,” and represents “white privilege.”  They say she would “make history” by wearing her hijab, Sharia garb, while competing.  (That she was the runner-up for this honor chosen by the Olympic team says how corrupted our culture has become.)  These acts are more than just the cowardice of the Left being willing to submit to Islam and bow to Allah.  They are a betrayal of our Constitution, of God, and of America and all her have fought for liberty!