Witness the Liberal Radicals on the March 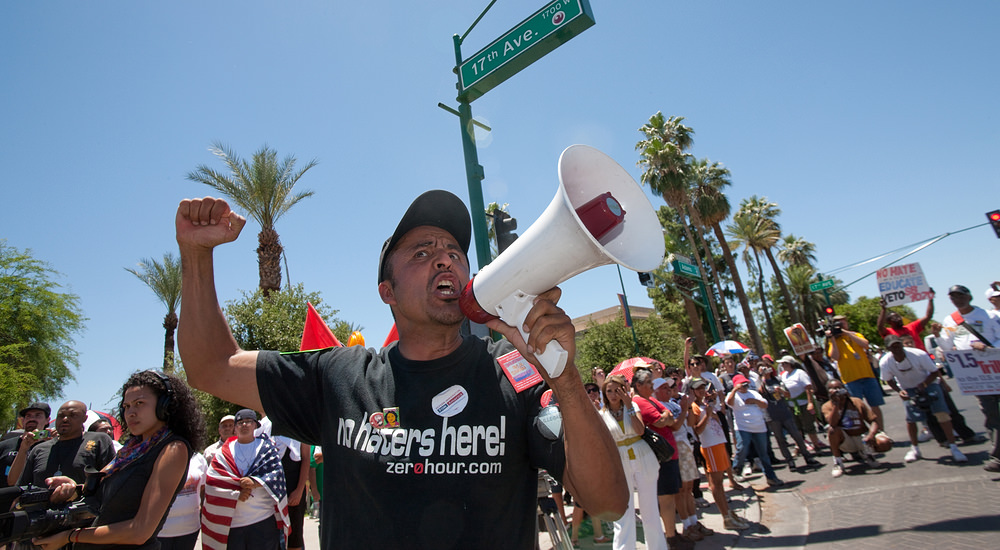 Any American who truly loves this country will not give one good damn about being called “racist” by the party of hypocrisy, the Progressive Democrat Party, for standing for Donald Trump’s policies to control our borders, halt illegal immigration, and safeguard U.S. sovereignty and national security. We reject the hypocrisy of the Democratic Party that uses little children to promote lies concerning illegal aliens and separating families. We reject the hypocrisy of the Far Left movement that screams “Baby Killer” at our Veterans any other time  that they aren’t carting out loser generals, such as General John Allen, and Gold Star parents, like Khizr and Ghazala Khan, who promote Sharia law in America and unrestrained Muslim immigration. And if America does not get behind Donald Trump’s immigration policies to halt the Progressive Democrats’ insanity, America, as we have known Her, will cease to exist.

A quick look at these people and groups who support illegal aliens and open borders for the U.s. shows that Donald Trump has been right to respond to tyhe attacks aimed at him. He just has not responded forcefully enough.

Socialist billionaire George Soros is currently funding 187 anti-Trump and largely anti-American organizations, through the Open Society Institute. Included in these groups, one finds the Alliance for Justice, which regularly depicts Republican judicial nominees as “extremists”. One finds America’s Voice, which advocates open borders and amnesty for illegal aliens. One finds the American Civil Liberties Union which supports open borders and has defended suspected terrorists and their supporters. And for all America to see, the Brookings Institute is on the list, consistently working with internationalists and state-sponsored programs toward the establishment of a U.N. dominated world government.

Soros also now funds the racist Hispanic organization LA RAZA, which is pertinent on all levels of the illegal alien question. This also places a new light on why Trump questioned Judge Gonzalo Curiel’s ability to remain unbiased in the Trump University case, since Curiel, the son of illegal aliens, is a member of LARAZA Lawyer’s Association of California and philosophically aligned with LA RAZA’s cause.

Initially funded by the Ford Foundation, the National Council of Churches and the United Auto Worker’s Union, the National Council of LARAZA [“the race” in Spanish] formed as a Mexican-American activist group. Several of its chapters, including the Southwest Council of La Raza and the Chicano Student Movement of Aztlan, are violent in nature. They have often been led by members of the Communist Party, such as Maclovio Barraza, and they seek to carve out a racist Hispanic nation in the American West, in what is called the “Reconquista” [reconquest].

Focusing on Progressive assertions that Republican immigration policies separate families, it must be said that normal civilized families make every effort to stay together, and children go wherever their parents lead. If any illegal aliens are deported under a Trump presidency due to their own abuse of U.S. hospitality and immigration law, taking their children with them or leaving them behind in proper care will be their own free choice, just as they chose to break U.S. law. They will split their family, not Americans or the U.S. government.

And, the same Far Left group of Commie-pinko fascists who wipe their collective asses on the U.S. Constitution and trash the families of the men Hillary and Obama left to be murdered in Benghazi, calling Foreign Officer Sean Smith’s mother a liar, are the same Hillary supporters who used the Khan family’s Gold Star status to vilify Trump’s proposed ban on Muslims. But Khizr Khan’s own background proves that once gain Trump is right.

Isn’t it curious that although Ghazala Khan wore the hijab at the 2016 Democratic National Convention, advancing a portrait of Muslim victim-hood, she is pictured with Obama at the 2012 DNC without it?

Khizr Khan has deep ties to international Islamist investors and controversial immigration programs that enable foreigners, including Iranian agents, to buy their way into the U.S., according to Sen. Jeff Sessions. Khan is a promoter of sharia law and co-founder of the ‘Journal of Contemporary Issues in Muslim Law [sharia]. He also supports the recruitment of young people to jihadism/ holy war, as detailed by Said Ramadan, the son-in-law of Hassan al-Banna who founded the Muslim Brotherhood __ a terrorist organization to which Huma Abedin,Hillary Clinton’s aide, is tied.

Khan’s service to Hogan and Hartson law firm, a mega-D.C. firm, from 2000 to 2007, illustrates perfectly the extreme political motivations behind his and Ghazala’s appearance on the DNC stage. This firm, now Hogan Lovells LLP, works for the Royal Embassy of Saudi Arabia, an exporter of the violent Wahhabi Islamic ideology, and its deep Saudi ties forced it to declare itself an agent for Saudi Arabia, under the Foreign Agent Registration Act of 1938. Hogan and Hartson/ Lovell has also long represented the Clinton Foundation, and it facilitated the recent $25 million Saudi Arabian donation to Hillary, that Trump has called for her to return.

The Khan’s son, Capt. Humayun Khan, may have served honorably, but he was not any more of a “hero” than the other 6,834 Americans killed in Afghanistan and Iraq. Given his father’s strong anti-American sentiments, the potential and probability that he would someday and somehow betray America was high, just as so many Muslim Americans serving in the U.S. Armed Forces have previously done. From Nidal Hassan to Ali Mohammed, the triple agent who penetrated the John F. Kennedy Warfare Center at Ft. Bragg, I addressed this problem in ‘The Muslim U.S. Military Experience’ (November 2011) in similar fashion to Michelle Malkin’s August 3rd ‘Not All Muslim Soldiers Are Equal’.

Having Khizr Khan, an Islamofascist, wave a pocket Constitution at the Democratic National Convention doesn’t automatically suspend our immigration laws or require America to relinquish its sovereign right to determine who is permitted entry into our country. By this same logic, the fear induced tears of a little Hispanic girl, a direct result of Progressive propaganda and fear-mongering, should not be allowed to hold all America hostage to Progressive open borders policies.

Trump may not be liked by some. But I’ll vote for Trump, “the imperfect vessel”, over Hillary, “the overflowing chamber pot”, because he will eradicate most of Obama and Hillary’s nation destroying policies.

I witness anti-Trump. pro-Bernie and pro-Hillary radicals across the nation burning the American flag. I witness the Islamic State flag waving openly in Ferguson, Missouri. I witness the Hispanic racist fascists of LA RAZA waving the Mexican flag, as they bludgeon young white men unconscious from San Diego to San Jose __ pelting one young white woman exiting a Trump rally with eggs and bottles. I see the sudden appearance of honor killings and hijabs across America. I recall the most devastating terrorist attack in world history on September 11th, 2001, followed by Ft. Hood, Boston, Chattanooga, San Bernardino and Orlando. And I enter the voting booth and cast my vote for Donald Trump, in order to ensure that America has a fighting chance to be the America that Our Founders envisioned.