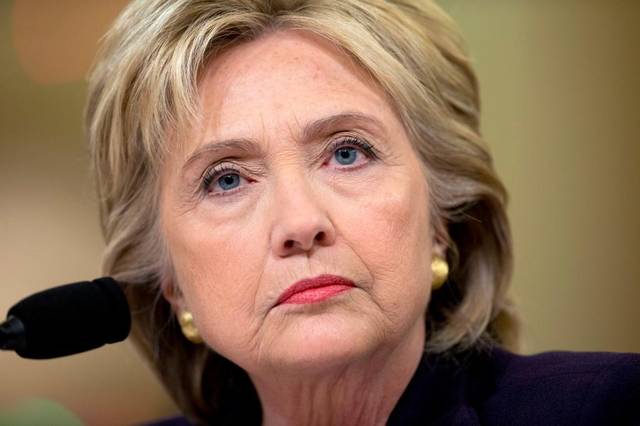 It is hard to imagine how one person could do so much wrong and never once be charged with a crime. Even worse she was elected to the U.S. Senate, was nominated to be Secretary of State and confirmed to be Secretary of State by the U.S. Senate. Now she is about to be “anointed” the President of the United States of America by the Democratic National Committee and Obama in spite of the fact that she is the subject of two FBI criminal investigations. One of the investigations is about her illegal use of an unsecured private server to conduct Official Government business and the other is an investigation into the activities of the Clinton Foundation. However Obama’s recent enthusiastic public endorsement of her to be President proves that he has ordered the Department of Justice to refuse to file any charges against her no matter how strong a case the FBI presents to the Department of Justice.

Many people refer to Hillary as the “devil”, with good reason. I actually began to refer to her that way years ago and then began to hear other people do the same thing. Recently I saw a news clip of one of her carefully choreographed speeches, to a carefully screened audience where she actually pointed out that she, “does not have horns”! It was meant as a laugh line for her sycophant supporters but it told me that her handlers are very much aware of her image problem. My delight at hearing this quickly subsided when I remembered hearing so many people say, “yes I know she is bad, but I am still going to vote for her” and learning that I could literally be verbally assaulted at places like the gym if I dared to say anything negative about her around some people!

I have no idea how many books have been written about her specifically, much less about her and Bill together. When you add the internet writings about her and him to the books there is probably more public information available about them than any couple in history. While some of the published information was written to make them look good or to attempt to overcome negative information, the majority of the writings provide detailed negative information about them. With Hillary running for President the focus has been much more on her than Bill in recent years.

Trending: A National Disgrace of Deplorable Black Lies that Matter

Hillary began her irrational, head first dive into politics during her college years when she became a disciple of Saul Alinsky. For those of you who are not familiar with Alinsky he was the father of the radical community organizer movement in America. Hillary’s senior thesis in college was about him. Obama was also an Alinsky disciple.

Over the years a lot of what has been written about Hillary, from a wide variety of unrelated sources, confirms that she is totally irrational and has an explosive temper. Some of her long, loud, profanity laced, and at times physical, attacks on Bill behind closed doors at the White House were so bad that the Secret Service agents on duty were concerned about how to protect the President from the First Lady.

Anyone who has watched her interviews or speeches, even on a limited basis has to admit that she “changes her story” from one moment to the next (lies).

Hillary’s first job after law school was working for the Watergate Special Prosecutor. She got the job as a favor to a friend. She was fired from that job for lying and evidence tampering. She should have been disbarred and criminally charged. This appears to be the beginning of her lifetime of believing she could say or do anything without any negative consequences.

When some of her activities at the Rose Law firm in Arkansas were questioned critical files mysteriously disappeared. The obviously altered files reappeared on a bed side table in one of the White House bedrooms when the investigation ended.

There was also her extraordinarily successful, one time cattle futures trade.

Six months into Clinton’s first term as President, White House Deputy Counsel Vince Foster committed suicide under what many say were questionable circumstances. He was more attached to Hillary than Bill. His primary responsibilities were to set up the Clinton’s Blind Trust, which was not going well, and to be the “keeper” of the Clinton’s pre White House files, including the “White Water” files.  Regardless of what anyone may believe about his death, it is undeniable that Hillary’s Chief of Staff, Margaret Williams literally walked around the Secret Service agent assigned to guard his office until appropriate investigators could get there and removed boxes of files.

“Travelgate” was an irrational and illegal Hillary disaster. She fabricated claims of inappropriate activities and actual charges were brought against the career, White House travel office staff in a failed attempt to award their positions to personal friends. In the process the career, working staff people’s lives were virtually destroyed.

After they left the White House the Clinton’s immediately set out to clean up Bill’s reputation, establish his legacy, set Hillary up to be President, and amass a personal fortune. Nothing was off limits in their efforts to accomplish all these goals. This is when Hillary first began to make her obsessive drive for personal money and power (she will never have enough of either).  She immediately began her carefully orchestrated plan to become a U.S. Senator from New York, which was supposed to be her stepping stone to becoming President. Just prior to becoming a Senator (while it was still legal?) she closed a deal for an $8,000,000 book advance.

As soon as Hillary was sworn in as a U.S. Senator she began to do what almost all senators do. She worked at becoming friends with all the other senators, avoided doing anything that may appear to be controversial, fund raised and planned for her presidential run. However, unlike the other Senators dreaming about being President, she was supposed to be preordained. And then another Alinsky disciple came along and took the Presidency from her! But Hillary was not to be denied the Presidency. She simply moved on to a new plan to replace Obama as president and joined Bill in his efforts to turn the Clinton Foundation into an international money machine.

Hillary’s new plan to be president actually worked out better than her initial one. It gave the Clinton’s an opportunity to cut an unbeatable deal with Obama. Hillary became Secretary of State, which added to her resume and allowed the Clinton’s to turn the Clinton Foundation into an international money machine on steroids! In exchange the Clinton’s agreed to help make sure Obama got re-elected and Hillary would be assured the Presidency in 2016.

Hillary was now in a position to do anything she wanted to with absolutely no concern about any consequences as long as she did her part to make sure Obama was reelected. This was an absolute “win win” situation for the Clintons and Obama. Obama was assured that he would be unchallenged by Hillary in his reelection bid and he would have her full support for his ideologically driven transformation of America.  She was free to commit massive fraud and treason as Secretary of State and was guaranteed to be the next president.

Here is a small sample of the illegal and treasonous things Hillary did as Secretary of State:

Hillary will be worse than Obama in all respects unless we do something about it!

American Music Icon Dead at 72; Was Set to Tour This Summer
Flag And Cross

Director Of The CDC Claims That European-Style Health Passes ‘May Very Well Be A Path Forward In The U.S.
The Political Cowboy