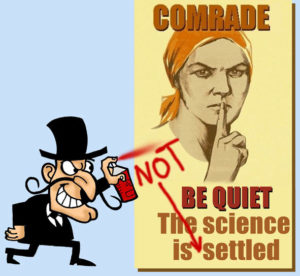 The only thing settled about science is that it seems never to actually be settled. Yet we stupid people in flyover country who have the nerve to question the “scientific community,” are constantly told how wrong we are.

As we are not intelligent enough, we must therefore relinquish our common sense to the smart people who are more than willing and ready to step in and educate us. Check that. They don’t actually educate us. Rather they just demand we comply because…you know…the science is settled.

Obviously this is the way it is regarding global warming, or climate change. If you don’t believe the science is settled, you are labeled a denier, like some kind of heretic. But it’s not just the science of global warming that the experts claim is settled. Other “settled” sciences have mysteriously become unsettled.

Almost two years ago, March 2015, I wrote an article entitled, “The Silliness of Settled Science.”

In it I chronicled a host of supposedly “settled” sciences such as drinking milk will build strong bones due the calcium in it. Turns out this was not settled. The latest science claims the opposite. Yet for decades we have preached to our children to “drink your milk.”

Another claim was that salt kills. The claim by the American Heart Association with the help of the New England Journal of Medicine, has netted the AHA countless millions in funding for various anti-salt campaigns. The claims also spawned whole salt-substitute industries, as well as politicians like then NYC Mayor Michael “Nanny” Bloomberg demanding limited intake.

Again, this so called settled science is anything but. New studies citing the danger from too little salt is far greater than too much. Don’t expect an oops – we were wrong, by any of these know-it-alls.

Fat will make you fat – no it won’t. Oatmeal is a cure-all – no it’s not. Coffee is bad for you – no it’s not. Even the “settled” science of the Big Bang Theory is now being questioned. There may have never been one.

Now the settled science of cholesterol is being turned upside down. The American Thinker writes that, “Cholesterol has been a fixture in dietary warnings in the United States at least since 1961, when it appeared in guidelines developed by the American Heart Association. Later adopted by the federal government, such warnings helped shift eating habits — per capita egg consumption dropped about 30 percent — and harmed egg farmers.”

After 56 years of warnings, our smarter-than-we government has decided to drop its caution about eating cholesterol-laden food.

Just five years ago the AHA and the federal government reiterated that excess cholesterol in the American diet is definitely a public health concern.

Now they’ve made a 180. The people of the “settled” science now believe that, “for healthy adults, eating foods high in cholesterol may not significantly affect the level of cholesterol in the blood or increase the risk of heart disease.”

But we’re not out of woods completely. Of course not. There must always be a warning regarding something. The smart people can’t just let us live our lives. Instead of worrying about foods high in cholesterol, our government is now saying its saturated fats that are the real culprits. “…too many servings of foods heavy with saturated fats, such as fatty meats, whole milk, and butter,” is for sure a serious issue – until its not in another five or 10 years.

The moral of the story is, or should be, to just live our lives. The sky is not falling. Eat what you want. Do whatever you wish. Live a life of moderation and stop listening the moment some so-called expert claims the science is settled.