Obama’s Last Days are a Blueprint for World War 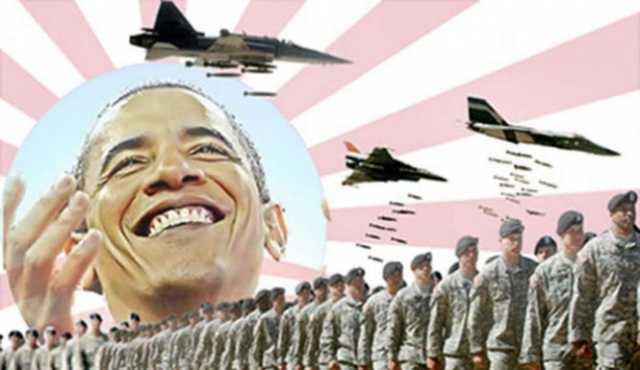 Some of you are probably old enough to remember the bumper sticker “What If They Gave A War And No One Came?”  Incredibly, we are now getting the answer to that question from Russian leader Alexander Putin.

Nobel Peace Prize winner Barak Obama keeps trying to start a war with Russia, and Putin keeps refusing to show up! (See my iPatriot article Obama Has Brought the US to the Brink of War with Russia, 10/6/16, for recent background)

Obama’s latest provocation has been to close two Russian diplomatic compounds in the US and expel 35 diplomats for no demonstrable reason whatsoever; along with new sanctions.  (Totally unsupported allegations of Russian hacking of US elections is the official cover story)  These are the kinds of actions that precede a declaration of war.  The Cuban Missile Crisis didn’t produce this much action.

But Putin’s response has been simply to announce that he will not respond in kind.  The Russian embassy in London Tweeted that the Obama administration is “hapless,” and attached a picture of a duck with the word “LAME” printed across it.  Poor, stupid Obama.

Except that he’s actually not poor, or that stupid.  He has another iron in the start-WWIII-fire; and he clearly hates what is left of the Judeo-Christian world.

Obama instructed our UN Ambassador Samantha Power to “abstain” in the December 23 UN Security Council vote on Resolution 2334 (while you were getting ready for Christmas). This resolution is reliably reported to have in fact been engineered by the Obama administration.

Resolution 2334 resolves that Israel’s establishment of settlements in Palestinian territory occupied since 1967, including East Jerusalem, has no legal validity.  The implication is that Israel must clear out of all that is deemed “occupied territory” – including Jerusalem!

The anti-Israel nations (mostly Muslim) in the UN have been offering resolutions like this for decades, but the US always vetoed them in the Security Council.  Our abstention this time around allowed the resolution to pass 14 to 0, signaling a withdrawal of US support of Israel – at least for the next three weeks.

The resolution will now go to a 70-nation Middle East peace process meeting in Paris on January 15, 2017 – just 5 days before President-elect Trump is to be inaugurated.  The resolution is certain to pass in Paris.  This will then set the stage for a possible UN formal declaration of a new, separate, independent Palestinian nation state in the holy land before Donald Trump’s presidency begins on January 20.  President Trump would be presented with a fiat accompli.

This Palestinian nation state would necessarily include territory that would then be illegally occupied by Israel, including Jerusalem.

This is a blueprint for war in the Middle East.

Jewish Israelis must be truly frightened about now.  They certainly should be.  Their only external government support in this world, the US, has just abandoned them.  Their only bargaining chip in peace negotiations, occupied territory, has just been taken from them.  And while we abstained on the Resolution, China, France, Germany, Russia and the United Kingdom all voted with the majority.  For the moment all the world is aligned against Israel.

Perhaps a President Trump will be able to thwart war and the two-state scenario, maybe by moving the US embassy to Jerusalem, but by then it may be too late.  At a minimum, the legal basis for sanctions, boycotts and an invasion of Israel will have already been established.

The Bible repeatedly prophecies war for the nation of Israel, standing alone, toward the close of history as we know it.  Action on Resolution 2334 (along with the very reemergence of a nation of Israel after 2000 years) could well be setting the stage for such a war.

With Israel facing the world alone, this is looking very biblical.  Resolution 2334 puts us on the flight path to a prophetic conflict.

And there will be such a war. The “Middle East peace process” is a Kabuki boogie; and a fool’s errand if ever there was one.  Let me explain this as briefly as I can.

12 He will be a wild donkey of a man;
his hand will be against everyone
and everyone’s hand against him,
and he will live in hostility
toward[a] all his brothers.”

Islam anyone?  Not a bad call from four thousand years ago.

How do you make peace with a wild donkey?

In Psalm 122 verse 6, Jews, and now also Christians, are called to “Pray for the peace of Jerusalem.” The time to do so is growing short.