The GOP has Embraced Racism! 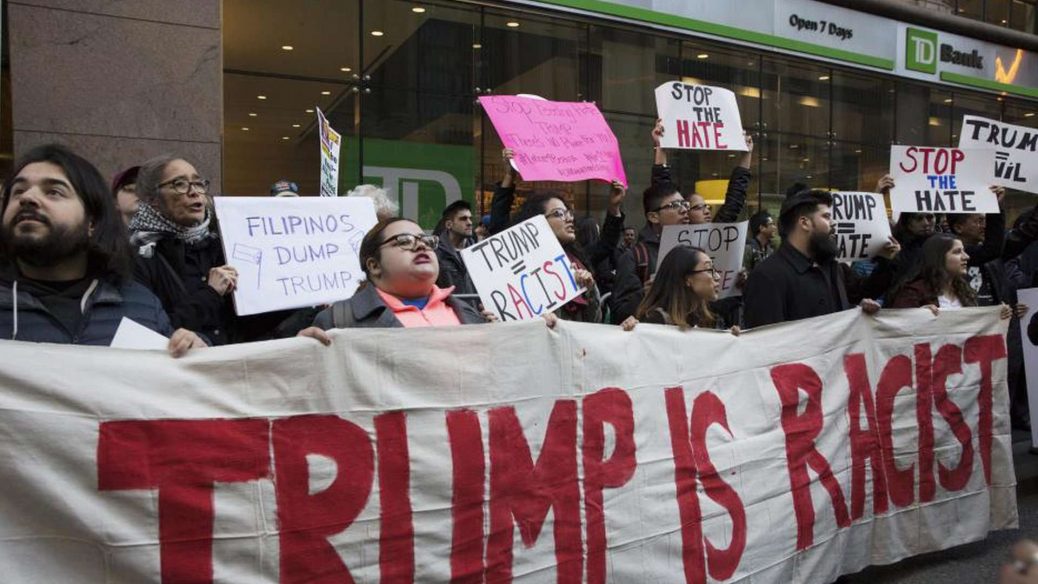 As Ronald Reagan stated “government asks us to concentrate our hopes and dreams on one man; that we trust him to do what’s best for us. My view of government places trusts not in one person or in one party, but in those values that transcend persons and parties. The trust is where it belongs—in the people.” But the Republican party has given up all of its values, its morals, ethics, and integrity, hoping that one man, not well liked or trusted, nor believed will deliver the Whitehouse to the party in 2016.

The problem is that this one man has more in common with Adolf Hitler than he has in my political leanings. Let me explain. Adolf used racism to gain power, so is Donald Trump, from threatening borders, to misogyny, to the heritage of a judge trying a case that Donald has. Adolf used mass deportations, and surprisingly, that is the rhetoric that Donald has spewed over and over. Adolf promised to make Germany great again, and Donald uses the expression of “making America Great Again”. Adolf was an anti-Jew fascist, while Trump is an anti-Muslimism fascist. Adolf blamed Jews for the problems in Germany, while Donald blames immigrants and his supremacist supporters still blame the Jews. Adolf Hitler used special IDs for Jewish people, while Donald has proposed similar ideas for Muslims. None of these items can I morally support, be a part of, or endorse in any manner. This is also where the #neotrumpism movement is coming from.

We hate to disappoint all liberal Democrats, but we will also not be voting for Hillary Clinton for she has more in common with the worst in American History like murderers with the deaths of the Benghazi people, and the ill-fated decisions throughout the world that Hillary was part of as Secretary of the state. We cannot endorse a murdering, illegal email compromising money grubbing liar such as Hillary either.

So where do I and millions of other voters fall? It is very simple, but one so hard for the pundits, the media, and authors of many political leaning publications. We are part of a true movement. This movement started more than 240 years ago. It started with some well-known names The very thought of attendees of the Constitutional Convention – George Washington, John Adams, and Ben Franklin, just to name a few – collected in a single room, while deciding the fate of a new country is staggering. The brilliance of the signers of the Constitution is only second to the bravery displayed by them. These are our advisors, the true servant leaders who showed true geopolitical genius with their actions and not grandiloquence.

We believe in a true Constitutional Conservative, not willing to put their own aspirations in front of the constitution or the American citizen. For our Country was founded on the principle of the pursuit of happiness from within, not guaranteed by a government. The Preamble quotes beautifully what the forefathers, and authors of the Constitution wanted to succeed at: “We the people of the United States, in order to form a more perfect union, establish justice, insure domestic tranquility, provide for the common defense, promote the general welfare, and secure the blessings of liberty to ourselves and our posterity, do ordain and establish this Constitution for the United States of America.”

We are proud conservatives with a desire and belief in A strong defense, while maintaining a small government. Low taxes while being fiscally responsible in all financial manners. Adherence to the constitution, while defending American sovereignty. Law and order based on color and race blindness while adhering to American Values. Personal responsibility while respect for human life at any stage, within the boundary of a love of country. We want the whole 10 original amendments to be adhered to, not coerced, corrupted, or changed to meet any other desire.

We are proud to support freedom of speech religion and media. We demand to hold onto our right to bear arms, and limitations to search and seizures. A right to a speedy trial without excessive bail, or cruel punishment. Finally, we believe in the rights of each state to independently have their own constitutions and governing bodies. No more mandates from the federal government, and no more unwarranted deterioration of our rights. We realize for every new law, another freedom is lost to a hypocritical group of lifetime political anarchists, and believe that we deserve the Constitution in all forms unadulterated, and firm in its standing.

We are Constitutional Americans, and will accept nothing less from any candidate running for office. We are the silent majority, the true silent majority that will no longer be silenced by bully tactics, or trickery.