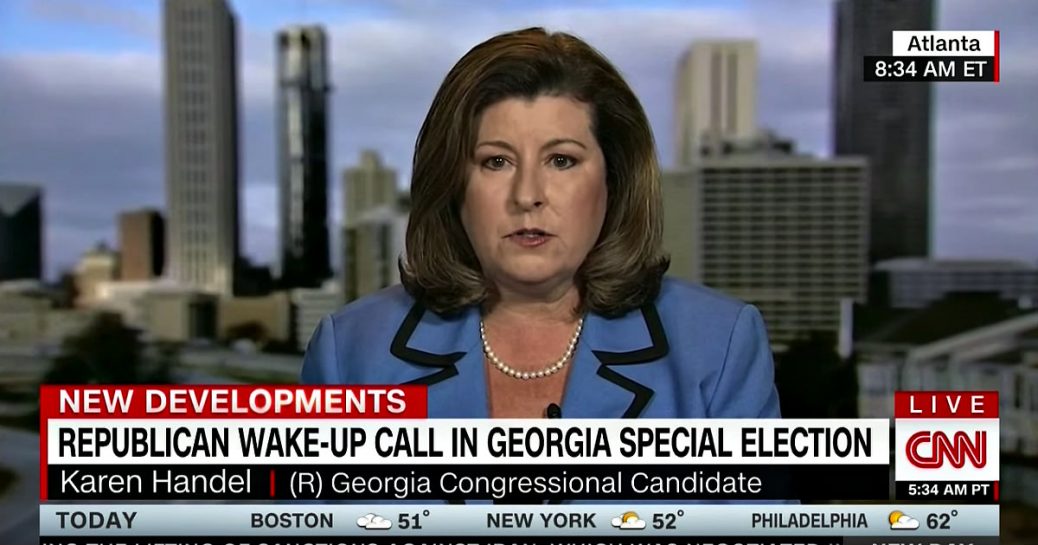 Karen Handel (R-GA) is the right woman for the job of winning Health and Human Services Secretary Tom Price’s old seat from the 6th District of Georgia. She proved it by being the leading GOP candidate in Tuesday night’s “jungle primary” and she’s already proving it today by going on the offensive and starting the campaign immediately. No down time for Handel in this special election.

She made the rounds on the morning news shows today and she spent time hammering her carpetbagging opponent, Jon Ossoff, and praising President Trump.

Handel told Fox & Friends that Ossoff doesn’t have the life experience of the understanding of the 6th district to represent the people there.

“I have a proven track record of getting things done as… former Secretary of State [of Georgia]. I have had life experiences where I have overcome real adversity. That helps you grow as a person. I am absolutely confident that the people of the sixth district want a strong independent-minded conservative as their next congressman.”

Handel also appeared on CNN, where she continued to beat up on Ossoff, reminding host Alisyn Camerota that Ossoff doesn’t even live in the district. She also told Camerota that Republicans would be making a united, and concerted stand against Ossoff over the next few months.

Alisyn Camerota: You just tweeted moments ago to Donald Trump, “thank you for the call this morning.” What did the president tell you?

Karen Handel: He just called to say congratulations and encourage me and let me know that as we go into June 20th, that, you know, it’s all hands on deck for Republicans. And we take it very seriously. And I’m proud to be the Republican going to the run-off. And I think it’s important in this district. This is a district where people know me and they trust me. And that’s a big contrast to the Democrat who doesn’t even live in the district. Gosh, he couldn’t even vote for himself yet.

Alisyn Camerota: Do you think that President Trump will come to Georgia and campaign with you?

Karen Handel: I would hope so. I mean, look, we, all Republicans, it is all hands on deck for us. We know what’s at stake here and I don’t think that any… this is about any one person. We all have to rise above it, that it is about the district that has a long legacy of Republican leadership, from my good friend current HHS Secretary Tom Price, to Senator Isakson and former Speaker Newt Gingrich. So we are all, including the very good ten other Republican candidates, we are all going to be united because we know what our job is over the next 60 days.

Alisyn Camerota: I mean, very quickly, President Trump only won there by one percentage point. Are you certain that he will be an asset for you in the district?

Karen Handel: Again, it is all Republicans all hands on deck. So we are going to be united.