God Has No Opinions and His Children are not Bigots 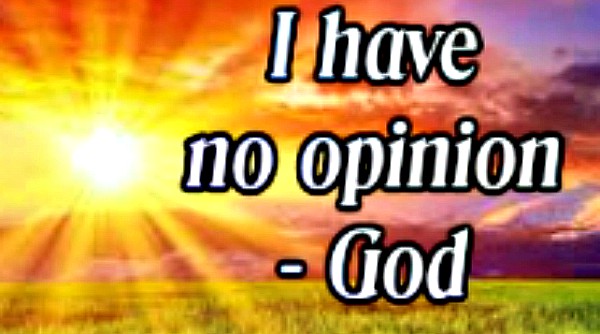 Because God is the ultimate authority on all things and is the law giver, he has no opinions whatsoever. When he says something, it is established forever.

Men are fickle and believe that morality depends on the shifting sands of relative thinking and trends of the day.

God will not lie.

“That by two immutable things, in which it was impossible for God to lie, we might have a strong consolation, who have fled for refuge to lay hold upon the hope set before us:” (Heb 6: 18)

Because God is holy and always completely dignified, he reveals his truth to us to help us become dignified as well. When we say God has not spoken or did not mean exactly what he said, he doesn’t lose any dignity – but we do!

The very idea that God changes his mind comes from the perverted mind of the god of this world, Satan. He is not only a liar, but he is the father of all lies. (Jn 8: 44)

Only Satan could twist the truth so badly, that to say homosexuality was against God’s commands is perverted and undignified, but being gay is perfectly normal.

This is exactly what happened recently when the British R-mornings show which aired in Spain was fined $7,000 because it was a threat to the dignity of homosexuals and transgenders.

Anyone who has attended a gay pride parade or visited the websites of various gay groups can easily see that dignity was given up by the sodomites quite on their own. Men gyrating with other men and children dressed in drag are hardly what we think of as dignified.

In the nether world of transanity we now have transgendered boys competing (and dominating) matches with girls. What is dignified or sporting about that?

Calling God a liar has become an art form and a quest among the political class of nations. In America it’s the “separation of church and state”, but in Canada the idea is to discard not separate. Biblical teachings have been declared incompatible with higher education in Canada which can be seen in the Canadian Supreme Court’s ruling against Trinity Western University’s (TWU) Law School.

Satan’s vintage perversion is to twist the deeply immoral into a perfectly legitimate and whitewashed matter of civil rights and personal freedoms. The old master of deception has them marching to hell in full rainbow colors and dancing to the tune of the piper, all the while they are insisting that it is “dignified.”

What is dignified about Philadelphia’s gay Rep Brian Sims posting a picture of himself flipping off Vice President Mike Pence and telling him to get out of the city?

Our Vice President is no bigot, but rather is one of the most dignified Bible believing gentlemen our nation has ever produced.

The gays call it “pride” but it is shame in all of its totally undignified, demonically induced, and de-humanizing evil.

“Woe unto them that call evil good, and good evil; that put darkness for light, and light for darkness; that put bitter for sweet, and sweet for bitter!” (Isa 5: 20)