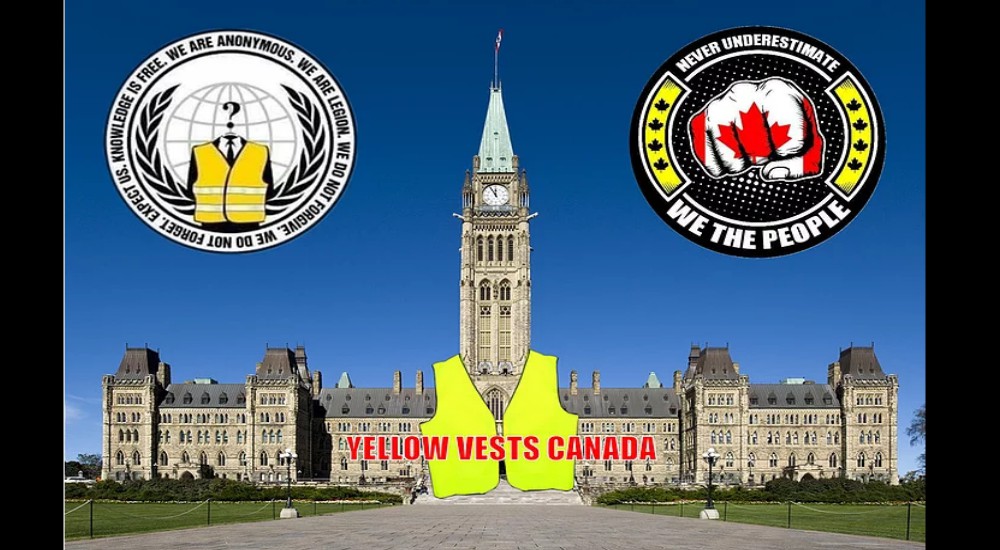 At first, the standoff seems easily recognizable. In one corner are the Yellow Vests, the pro-nationalist Patriots. They enter the ring determined to defeat the Globalists. In the other corner is Antifa, the hardcore Communist Left who appear to know everything, dedicated to disruption and disrespect, preventing honest dialogue…

Primary Yellow Vests are robust, hard-working citizens who support the Constitution and chant “No UN!” The much younger and physically weaker Left unthinkingly shout their routine tirade of “Racist!” and “No hate!” Communist flags and rainbow posters are their symbols!

Studying the overt Left, the smug Antifa, they generally fill a very constricted profile, to qualify as dupes for the NWO. They are late teens/early twenties, generally deprived – systematically deprived – of true history by the Marxist revision historians and social engineers. In this deprivation mode, with no historical background on Communism’s destructive nature, they give their hearts to it with their Soros checks in hand…

(These were raised in an era of liberal educators imposing multicultural studies over true history, all through elementary and high school. These kids were never taught how their European grandparents were seriously manipulated by the Marxist Trotsky, who invented the words “racist” and “racism” to counter growing European opposition to his Marxist multicultural invasion of Europe.)

Before long, during the course of a rally, extremist groups show up on both sides. Radical neo-Nazis are on hand to quell MS-13 and masked potential terrorists. This appears to complete the recipe in the boiling cauldron of Right v. Left. This seems more than enough for the globalist wish to Divide and Conquer citizens to be realized! De-stabilizing, de-nationalizing, and de-Christianizing are fully underway!

But wait! What you have just read, what you “see” at these protests, is only the icing on the draconian Soros cake. Now, stay with this article for the Real Truth:

One soon realizes the overt Antifa Left is only a loud and convincing distraction! A deterrent, designed to keep one’s focus on them, and not on the more hidden subversions infiltrating the Yellow Vests. Truly, there are as many Soros payees who infiltrate as Fake Yellow Vests, working the true Yellow Vest side to divide them, the locality and the nation!

A powerful example was discovered at the two Yellow Vest rallies in Edmonton AB Canada on a robust Saturday, Jan. 5 2019. The rally with greater attendance was held at the Alberta Legislature on Saturday morning. While at first glance these seem to be united with the Yellow Vests at Winston Churchill Square in the afternoon, the divisions were soon apparent: This fake Yellow Vest meeting had different topics, watered-down conservatism, and a barely heard PA system. Its leaders soon led their Yellow Vests on a march, in the opposite direction of the immediately following true Yellow Vest meeting at Churchill…

This Soros-paid group hosting the Legislature event is seeking to take control of all Yellow Vests in Canada! Careerist Marxists wearing Yellow Vests, mingling smugly and “humbly” among the true Yellow Vests they’re dividing! These view the true National Citizens Alliance of Canada Yellow Vests as a threat to them and their status quo and there – in the final analysis – profiteering globalist representation… Fake Conservative, fake Yellow Vest media on YouTube immediately follows to “cover” such an event!

Immediately after the NCA sponsored its true Yellow Vest Rally in Edmonton in December 2018, the Soros misfits wasted no time! As if out of nowhere, a number of “Yellow Vest” groups sprung up! un Zuckerberg’s Facebook! (Conveniently overlooked by Facebook censors…)

This group is trying to unilaterally claim ownership of the movement and trying to get “Yellow Vests Canada” registered as a “non-profit” charity. They put together a Manifesto (where have we heard that term before? LOL!) that largely appears to have been pulled off the true Yellow Vest National Citizens Alliance FB pages and website.

How amusing the Soros puppets are making accusations against others for doing what they’re guilty of! (This is happening a lot lately! Reader, feel free to give examples below, of how NWO puppets are accusing others of what they are guilty of!) But the true Yellow Vest NCA has them dead to rights claiming ownership over something they have no legitimate right to! And the fake Soros Yellow Vests are saying they’ll censor anyone who doesn’t toe their official line. How clever!

Let no man deceive you!

NCA never claimed any ownership of the yellow vest theme but, sagaciously and wisely and with the vision of a true leader, Stephen Garvey released a statement last week that nobody owned it — after someone asked about the different groups that have sprung up. Infiltrators in the fake Yellow Vest Alberta-Legislature group were quietly badmouthing the true Yellow Vests, dividing them further!

But even with what you just read, the infiltrating Soros strategy doesn’t stop! As if Antifa disruptions and fake Yellow Vests weren’t enough, during the actual National Citizens Alliance true Yellow Vest rally, guess what! Trudeau and Soros infiltrators, wearing Yellow Vests, are circulating among true Yellow Vests! Not only do their globalist canvassing interrupt the NCA true Yellow Vest speakers, put they quietly push the Trudeau agenda while calling it Yellow Vest! They talk about separation, which is EXACTLY what Trudeau and Soros want! Further Division is the name of their game. People need to wake up! Trudeau is dividing up the Provinces and pitting them against each other. He wants the people of Alberta and the people of Quebec to have this rift.  De-nationalizing in Canada is fully underway…

And now these convincing “Yellow Vests” distract from the true Yellow Vest rally messages – while Antifa loudly and chronically also interrupts – while saying Alberta separatism is the only answer! But this is EXACTLY what Trudeau and Soros want! Boy Trudeau is doing the same as his Communist father, dividing East and West. The son is doing the same thing. “If you’ve seen the son, you’ve seen the father.” The people of Canada are the pawns in this destructive Globalist game. CANADA FIRST!!! THE PEOPLE, EAST AND WEST MUST UNITE!! But fake “Yellow Vests” distract from the true Yellow Vest speakers, while vigorously advocating Alberta separatism is the only solution…