Georgetown Students Go All In on Reparations 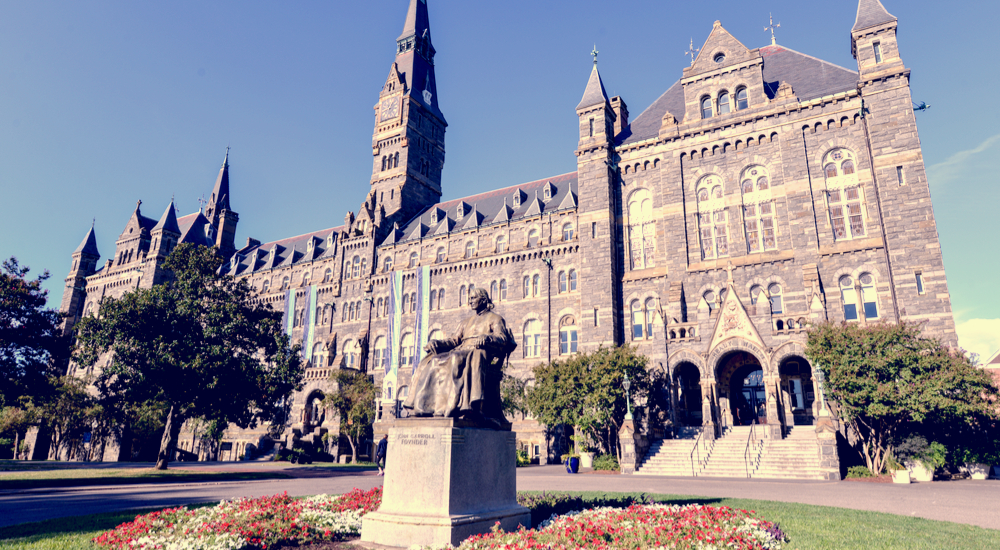 Heading into the next presidential extravaganza, one of the many potential ultra-progressive platform items is reparations for slavery. Many leftist candidates like Elizabeth Warren, Kamala Harris, Robert Francis O’Rourke, Corey Booker, etc., have either signed on or are considering an endorsement of it.

So popular has it become that a few days ago, CNN dedicated a full one-third of its home page to various articles regarding reparations.

And it’s not just grabbing the attention of Democrat politicians, clamoring for relevancy, but has naturally taken hold of the skulls full of mush (h/t: Rush Limbaugh) on college campuses. Surprising, I know, that “woke” college students would sign onto a program that takes money from one and distributes it to another.

Isn’t it interesting that the same student bodies across the nation, are, on one hand, trying to erase this era of our history by ridding us of everything Confederate, and on the other, trying to keep it alive by continually revisiting slavery? It’s as if they want it both ways. Oh, that’s right – they’re leftists, and leftists always want it both ways.

One could say, cynically of course, that the only reason these leftist candidates are even considering such a proposal is to curry favor with this newest block of fresh-faced voters, who just happen to be further left than are they.

And it seems the student body at Georgetown University in Maryland is taking the lead.

CNN writes that “Georgetown students vote in favor of paying reparations to the descendants of the slaves who made the school possible. Georgetown University might not be here today if the Maryland Society of Jesuits who oversaw the school hadn’t sold 272 slaves. The university was one of the Jesuits’ most ambitious projects. The revenue from the 1838 sale, which amounts to about $500,000 today, was used to sustain the school financially and pay off its debt. Now, some Georgetown students are trying to institute a reparations fund for the descendants of the slaves who were sold.”

I guess there is no statute of limitations on reparations, as this sale occurred some 181 years ago. I wonder how much I could get if it were discovered that I was descended from a tribe of oppressed cave people?

Last week, the students of Georgetown voted by a margin of 2 to 1 to approve a reparations referendum. The proposal would add $12 onto each student’s tuition. For how long is curiously not divulged. But if it’s like any other leftist program, once instituted, it will go on forever.

“Nile Blass is a Georgetown freshman who is part of the GU272 Advocacy Team behind the bill. ‘We believe that financial restitution funded toward conscious, descendant advocacy-based policy is the best way that we as an institution can support these individuals,’” Blass told CNN.

Well, Niles – that was well spoken for an 18-year-old. I wonder who wrote it for you?

And one might logically ask why a woke student like Niles would even attend such a University? There must be plenty of colleges that don’t have such a sorted history. And it’s not Georgetown is easy to get into.

In fact, Georgetown is one of the more difficult colleges to gain admission. One has to achieve a 34 ACT score and a 3.99 GPA or higher to even assure consideration.

I’d like to share one piece of wisdom to all the students who insist on pursuing this idiocy.

Bayard Rustin organized the 1963 March on Washington and was one of Martin Luther King, Jr’s closest advisers. He was also one of many vocal critics of blacks cashing in on the tribulations of the long-gone practice of slavery. Rustin said that “The idea of reparations is a ridiculous idea. If my great-grandfather picked cotton for 50 years, then he may deserve some money, but he’s dead and gone and nobody owes me anything.”