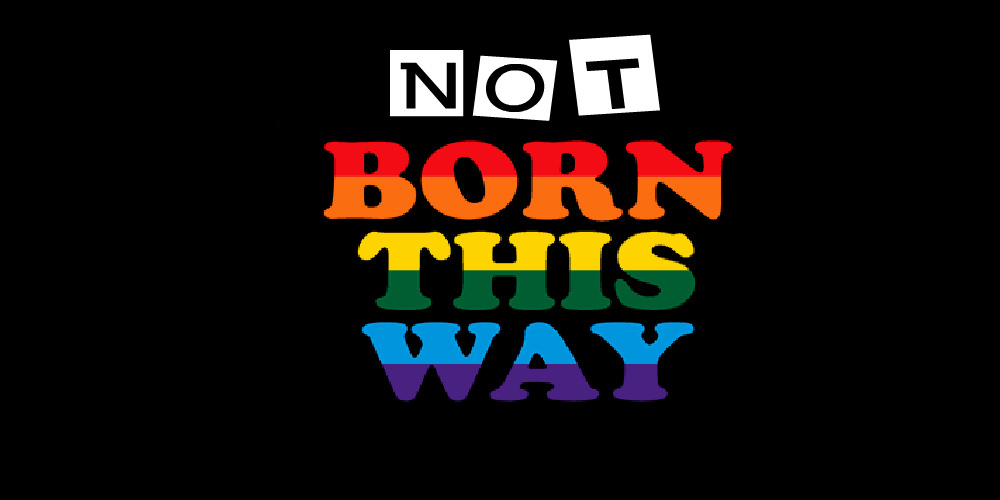 The myth that gays are ‘born this way’ is debunked AGAIN! I worked in a psychiatric hospital at the time (1970s) gay activists threatened and intimidated U.S. doctors to vote to remove homosexuality from its list of mental aberrations. The result is as we see it today – chaos, immorality, tax-payer funded vile activities, violence, and intimidation of the 99% of people who do not want to know about homosexuality.

On top of this, transgenders are now basking in the limelight, along with paedophiles, those who have sex with beasts, and the call to allow sex with dead bodies! It all came from the foolish laws supporting a nasty bundle of sexual evils under the umbrella ‘homosexuality’. How much longer will it take to wake up the world to what homosexuality is REALLY about – domination, power, and the desire to completely eradicate Christianity. Others are in league, including Greens and all kinds of socialists. As death comes to millions through homosexually-caused diseases (not just AIDS – there are many more, usually unknown in the general population).

In the 1970s I could argue my corner with anyone – social workers, consultants, therapists, nurses, newspapers. This was before homosexuals started to muscle their way through society, to silence critics. Yes, it was happening then, even before laws were passed to allow the sexually perverted to carry on as they wished.

Then, along came AIDS, first formally recognised in the 1980s. The very few cases began a landslide: as laws gave gays freedom to act and to publicise their squalid lifestyles, so the number of cases shot up. As a researcher I had receipt of official data on a daily basis, and my own research discovered one big fact – AIDS was caused by homosexuality. This was then a big news item, and I taught post-graduate nurses the REAL facts. Unfortunately, there were two homosexuals in the class, and my days were numbered.

Because the two students paid to attend the course, they threatened to demand their money back unless I was removed. I was about to start a new job, as director of health research, but both lectureship and directorship were suddenly taken away, because gays didn’t like that I spoke truth.

If homosexuals wish to kill themselves with exotic diseases in private, that’s fine by me. But, homosexuality was being marketed as an alternative to heterosexuality, and health ads were aimed at ALL the population when, at that time, EVERY case of AIDS had only one source – homosexuals. I predicted what would happen because of this misleading and dangerous campaign, warning that millions would die because of it. I also predicted who would get AIDS next, and I was proved to be right. My reward was to be sacked, blacklisted, and threatened with death! I was silenced.

Because I was blacklisted my career was already over. Every time I attempted to work for anyone gays discovered where I was and intimidated the employer. When I did freelance work for another university, the university was threatened with ‘consequences’. So I was dumped. I had to make other arrangements with jobs!

Twenty years after the first salvo, I had managed to secure a senior position in the health field. But, again, my lesbian boss found articles I had written and the whole process began again. I was hounded, sacked, intimidated, threatened by law and police, and my professional body published vile articles for three weeks running, calling me everything.

Why? I had replied to a health professor that “homosexuality is unhealthy, dangerous, and unnatural”. That was the statement, nothing more. It was perfectly correct, and I had pages of the latest data to prove it. But, who cares about truth? I could PROVE what I said, but propaganda won big-time.

I was kicked out immediately, without warning, on a charge of ‘homophobia’ and racism. The racism bit was tacked on because gays insisted on saying homophobia was the same as racism (?). I went to my lawyer, but he was shocked when, on the ‘phone, the boss of the establishment said he would lie if necessary to win his case. So, I could not go to a Tribunal… if I lost my case (through lies) I would have to pay all the legal costs running into many thousands. And, because I had to leave I could not have state unemployment benefits for six months!

This affected me for the next five years, until I reached retirement age. For those five years I struggled almost to extinction to survive, my bank stopped all my accounts, and I could not obtain a job; the financial liabilities are still with me. All thanks to the wickedness of gays, who hate Christians and truth-tellers.

What I openly said was that homosexuality is a choice, a desire to enter into a dangerous grubby relationship with another man/woman. Because it is a choice, no legal consideration is due, and laws should not be foisted on society by those who choose this death-cult. Especially as they groom and infect young people.

So, since the 1970s gays have ruled the roost and passed on awful diseases to millions, who then die. It should be borne in mind that AIDS is only ONE strain of the virus – there are about 20 more, unknown to the public. So, by legislating in favour of gays, all the world is put at severe risk. This is why the latest debunking MUST be listened to, so that all legislated pro-homosexuality is removed, and gays held responsible for their lies and deception.

A Lesbian Says She is ‘Not born this way’!

The interesting thing about this latest news is that the researcher is herself a lesbian. She is one of the few to be honest. Dr Lisa Diamond who works for the APA (American Psychological Association) acknowledged that gays “are not ‘born that way’.” (lifesitenews.com). in other words, homosexuality is a choice. THEY know it, and people like me know it. But, they continue to deceive the public and ignorant politicians. They even dupe medical doctors (who usually obtain all their information from one or two biased sources, so repeat the same things). Any doctor who speaks out ends his career.

Diamond said sexual orientation is fluid and not fixed. Yes, I KNOW. So did the psychiatrists who signed to release homosexuality from the mental illness category way back in the 1970s. They muttered amongst themselves as they were forced to comply with gay demands; they said that just about every psychiatrist KNEW gay was a choice and a mental imbalance. But, their jobs meant more to them. Even gays I treated KNEW their lifestyle was a choice and was wrong. It was only after AIDS came along that they started to manipulate the media, medics and politicians, because they feared a public backlash. I know all this because I was there, in real time. I am not redacting history!

The Battle is Over

Diamond is saying, on YouTube and everywhere else: “The battle to disprove ‘Born that way and can’t change’ is now over, and (I am) telling LGBT activists to stop promoting the myth.” I have come across a few gay leaders in the past who were honest, but they are now never heard. Diamond admits that the argument was challenged in 2011 – but who has heard about it? The gay propaganda machine is influential and like a tank – anything against their claims is blasted.

It means that reparative therapy advocates are on the right track, and laws against it are false and misinformed, if not deceptive. Diamond also refutes the gay claim that orientation fights are the “civil rights issue of our time”. It is NOT about civil rights – it is about being critical of a worthless CHOSEN lifestyle choice that kills people.

As one commentator said, “(This revelation) has very serious implications for the political actions of recent years, basically invalidating any appeals to science to justify recent legislation in areas of sexuality such as the recognition of ‘gay’ marriage, the imposition of restroom access based upon individuals’ self-identification or ‘feelings’ about their sex and the restriction of the freedom of choice of therapeutic options, especially for minors, in the areas of unwanted same-sex attraction or sexual confusion or dysphoria.” (Hieromonk Mark). Exactly!

I urge readers to fight the cause of decency and health, social morality and biblical principles. Without it, the world will wither on the branch as wicked deceivers demand obedience to their awful lifestyle choices, and grab our children as sex fodder.