The Fallacy of “Separation of Church and State” 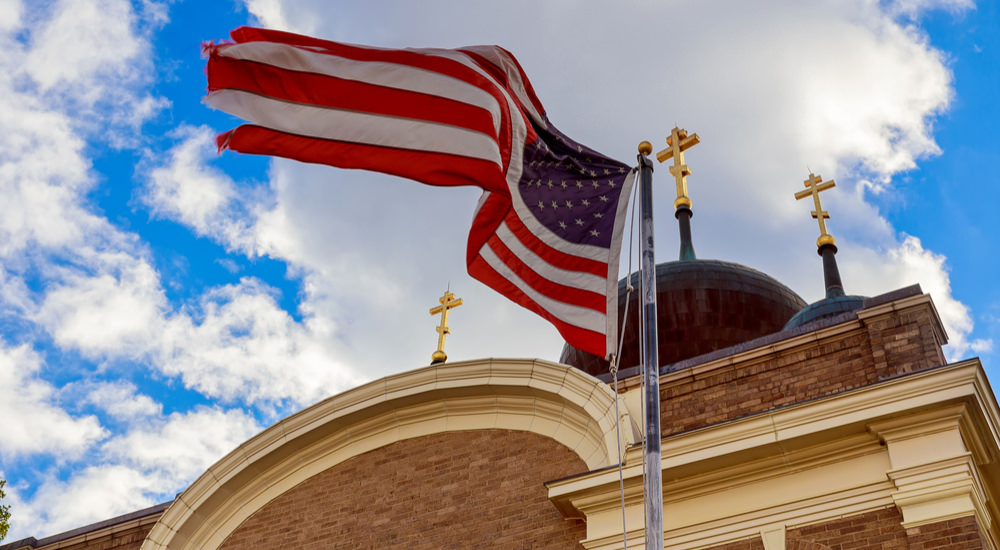 The Founding Fathers believed that government’s role in religion should be limited.

We cannot discount that the First Amendment begins “Congress shall make no law” either establishing a state religion or prohibiting the free exercise of religion. Rather than articulate an affirmative responsibility for government to protect religion, the Founding Fathers felt it was enough to keep the government out. If nothing else, the language of the First Amendment makes it clear the goal was to restrain government when it came to religion. There is no suggestion the Founders felt the establishment clause and the free exercise clause were in any way competing. Otherwise, why would the Founders include the two clauses together? The point was to keep government out of both realms. Both clauses were needed because it was not sufficient to restrain government from establishing a state religion; government also had to be restrained from any attempt to interfere with religious practices and beliefs. The negative language of the First Amendment does not prohibit Congress from passing a law that promotes religion, provided the judgement does not promote one religion over others.

Before the bad law and judicial activism that started with the abuse of the Constitution by Justice Hugo Black in Everson v Board of Education (1947), the states were not prohibited under the First Amendment from establishing religion, and nowhere in the debate on freedom of religion in the first Congress is there any mention of “separation of church and state.” Our Founders own writings clearly show that they never intended for public officials to check their convictions and beliefs at the door to their offices. They would have been shocked by the Court’s excessively broad interpretation of the First Amendment, given the language the Founders crafted with the belief it would protect open expression of religious beliefs in America. The Founders most certainly would have rebelled against the idea of an absolute “separation of church and state” and the use of the First and Fourteenth Amendments to eradicate all Judeo-Christian references to God from the public square, because these ideas are incompatible with the Original Intent and unalienable rights granted to each of us by our Creator, thus making them erroneous and historically unsupportable.

On New Year’s Day 1802, Thomas Jefferson wrote to the Danbury Baptists to assuage their fear that the federal government might one day attempt to condition religious freedom as a right granted by the state. Jefferson, an anti-Federalist, clearly stated his intention to keep government out of religious affairs rather than empower it to remove religion from the public arena: “Adhering to this expression of the supreme will of the nation in the behalf of the rights of conscience, I shall see with sincere satisfaction the progress of those sentiments which tend to restore to man all his natural rights, convinced he has no natural rights in opposition to his social duties.”

The First Amendment compels government not to eradicate religion from the public arena. If the expression of religious beliefs is an inherent God-designed part of human nature, as the Declaration of Independence proclaimed, then government acting to remove religion from the public sphere would have seemed to Our Founding Fathers to be acting in a manner antithetical to Our Founding Principles.

It is almost as if Justice Black decided the First Amendment was equivalent to the biblical admonition to render unto Caesar what is Caesar’s and unto God what is God’s, under the assumption that a discernible distinction could be made without conflict between what was Caesar’s and what was God’s. The whole point of the First Amendment’s attempt to protect freedom of religion is that over time Caesar tends to intrude upon God.

In 1948, the Supreme Court ruled in McCollom v Board of Education, 333 U.S. 203 (1948) that religious education provided b y churches on public school grounds in Illinois during the school day was unconstitutional. Then in 1952, in Zorach v Clauson, 343 U.S. 306 (1952), the Supreme Court found that allowing New York students to leave school grounds for religious education was constitutional. Dissenting in Zorach, Justice Black wrote, “I see no significant difference between the invalid Illinois system and that of New York here sustained.” If Justice Black, the author of the court’s majority opinion in Everson, could not distinguish these cases, how could state, county, city or municipal school officials be expected to make the distinction reliably?

A Godless public square could not be more antithetical to what Our Founding Fathers thought they were achieving when drafting the First Amendment, and the Courts distort precedent whenever they use the Establishment Clause to crush all things religious. Ironically, the very language crafted to protect religious freedom has now reached the point at which Americans can only be assured freedom from religion in all places within this nation, with the possible exceptions of prayer confined to church and free expression of religion confined to the privacy of one’s home.

Jefferson made a poignant remark in Notes on the State of Virginia, which clarifies his thinking: “And can the liberties of a nation be thought secure if we have lost the only firm basis, a conviction in the minds of the people that these liberties are the gift of God? That they are not to be violated but with His wrath?” Why didn’t the Supreme Court choose this text for their ruling? Or his use of “natural rights” in other documents? Justice Clarence Thomas once stated: “… this Court’s nebulous Establishment Clause analyses, turn on little more than “judicial predilections … It should be noted that the extent to which traditional Judeo-Christian religion is removed from the public square and the public schools, it is replaced by other religions, including Secular Humanism, which is specifically recognized as a religion by the Supreme Court.”

In order to combat this assault on religious freedom and religious liberty, to date, twenty-one states have enacted Religious Freedom Restoration Acts since 1993. Currently, ten states are considering legislation on the topic this year, according to the National Conference of State Legislatures. Virginia amended their state RFRA, but otherwise no states have passed their legislation.

For eight decades, the ACLU has been America’s leading religious censor, waging a largely uncontested war, until recently, against America’s core values, utilizing every fallacy, piece of misinformation and outright LIE imaginable in its war against religious liberty, with the support of much of the current Marxist media; both are intent on destroying traditional America, including the nuclear family. We now live in a country where our traditional Christian and Jewish faith and religion — civilizing forces in any society — are openly mocked and increasingly pushed to the margins, and our weapon to stop them is the Founding Fathers’ own words and their Original Intent regarding the U.S. Constitution.

Ultimately, two very diverse thinkers, Thomas Jefferson and John Adams concluded, that without virtue based on a solid belief in God, Liberty was inevitably lost. In other words, if the Supreme Court, through the efforts of Communists, atheists and fools and ACLU prompting, succeeds in removing the Judeo-Christian God from American public life, a foundation pillar upon which American liberty has depended will have been removed, perhaps irretrievably. Without the open expression of religious freedom so fundamental to American liberty that it is written into the First Amendment of the Bill of Rights, American Liberty will not long persist. Americans cannot and must not allow the Communists and atheists of this nation and the ACLU to secularize America to the point where our tolerance is turned into silencing and punishing religious speech. Life is valuable; marriage is a God-ordained institution between one man and one woman, and families are comprised of a male father and a female mother with any number of children. Any attack against Christianity and Judaism in America using the fallacy of “separation of Church and State” is simply an attempt to further undermine, not only Our U.S. Constitution and Religious Liberty, but Our entire traditional American way of life.

Do not accept the Fallacy.