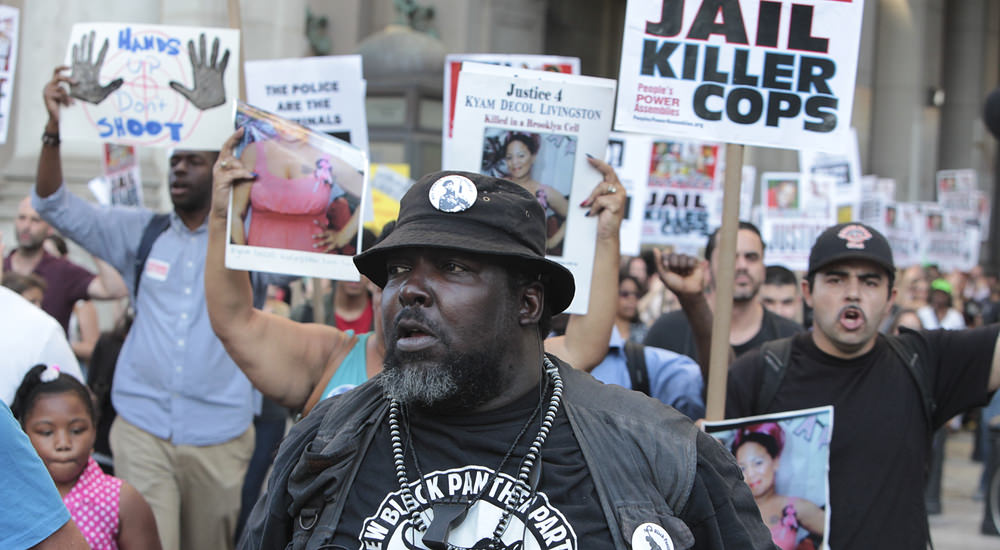 When Sheriff Clarke stood in front of the Republican Convention and shouted, “Blue lives matter” he received a thunderous applause.  Malik Shabazz, former Black Panther leader and a BLM advocate says that’s racist.  What Shabazz calls racism, like what he calls heroic, (i.e. the Baton Rouge Nation of Islam terrorist who murdered three police, including a black officer), makes what is white black and what is black white.

When Megyn Kelly questioned him about the beginnings of the BLM movement that was based on the “hands up don’t shoot” lie of Michael Brown, Shabazz said that was a murder of an unarmed, non-threatening black youth.  He denied that the hulking three hundred pound Brown was so much bigger that the hundred-sixty pound officer could or would even attempt to take the officer’s gun, despite the officer’s extensive injuries from being pummeled by Brown.  Instead he claims those facts were the white people’s made up version of events.  He described Kelly’s insistence on the facts as being her “attitude that is part of the problem,” that problem being she and all who speak the truth are “white supremacists.”

Even black liberal Democrat Harvard Professor Roland Fryer, Jr. who endeavored to prove police racism against blacks for the last two years found none.  Racist agitators like Shabazz white wash black crime that is ten times that of whites, Hispanics, and Asians combined, and says there is no reason why blacks should suffer ten times more than others when confronted by the law.  The excuse that blacks live in poverty and are oppressed fall flat in the face of others who live in poverty but work toward bettering their lives rather than turning to crime.

In the interview Shabazz talks about “white privilege” as if that is what is stopping blacks from prospering, but conveniently overlooks the facts that multitudes of non-whites prosper in America.  His dysfunctional leftist logic even completely disregards all the blacks who prosper because they choose to become educated and hard working together with white people and become Republicans.

The problem isn’t with white people, there isn’t any white privilege, and America’s cops and good citizens are not white supremacists.  Rather the problem is with blacks who treat white people with contempt and become deadbeat Democrats living off welfare, doing drugs, and committing crimes, and then complaining that being punished for being criminals is unfair.  Shabazz vowed that blacks will continue to become more violent criminals if Trump should win based on his belief of the slander that Trump is racist, and that police becoming more brutal in response is more proof of white supremacy.  This twisted morality that evil is good and good is wrong is what is wrong with the entire Democrat Party.