Donald Trump: Not my First Choice but My Only Choice 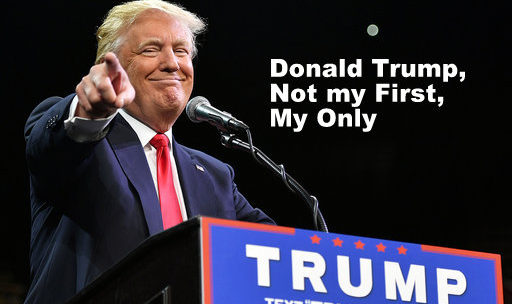 Donald Trump was not my first, nor my second, not even my third choice but now he is my only choice for President of the United States.

I don’t normally write about politics but I feel led to add my voice to the mix that is flooding the Internet since “The Donald” became the presumptive nominee of the Republican Party (By the end of the week, THE Nominee).

I’ll be honest, I wanted Ben Carson first and then I was torn between Marco Rubio and Ted Cruse but they couldn’t push passed the so called “Trump Train.”

Being honest again, I never much cared for “The Donald” as I have watched him on TV over the years. I found him arrogant and very full of himself. Very much the “Businessman” type that I generally can’t warm up to. But in listening to him speak now; I have to say that I agree with most of the things he is talking about.  I do like what he says!

But I am still a little afraid of him and what he might say or do once he is elected. But then I was afraid of what Reagan might do or say when he first ran for office in 1980. Now I can’t think of a better President and wish we could have a leader like him again.  Am I comparing Trump to Reagan or thinking he might be that kind of President? No, but I have an expectation of good things ahead.

To those in the #NeverTrump movement I have to say, “GET OVER IT”. He is the nominee and won it fair and square with more votes than ANY Republican contender in history. He did not steal the nomination, he Earned it.

Do you really want 4 to 8 years of Hillary in the White House?

>If you are thinking of not voting for Trump or voting for a third party, then you might as well cast your vote for Mrs. Clinton and be done with it.

Let’s get REAL; there are ONLY TWO choices in our 2 party system. NO third party has a chance of winning the Presidency, no matter how much you might hope they would. If you normally vote for the Republican nominee, then voting for any other candidate is a vote for Hillary. You can stand on principle all you want but you had better be ready for President Hillary Clinton all that means.

Looking for someone fresh

When this process first started I was looking for someone new, someone fresh, and that is what attracted me to Senator Rubio, I liked his fresh outlook. Then Dr. Carson caught my attention and I loved his faith and his common sense approach to our problems. Senator Cruse came into focus for me because of his willingness to take on everyone, right or left if he felt it was the right thing to do for the country.

But all the while the “Trump Train” kept on chugging down the tracks, mile after mile, picking up steam until it was apparent to all that it was unstoppable. And I am beginning to see that that “Train” just might take us all the way to the station on Pennsylvania Avenue.

We Need a Leader

I know that Mr. Trump is scary to some, but he just might be the kind of steamroller we need in DC to shake things up and get things moving. To be a success in business the way he has been, you have to be able to bring people together to get the job done. And we need someone with that kind of talent.

This country cannot take another 4 to 8 years of what we have had in the White House the last 7 1/2.

The current occupant of the White House ran on a promise of “Hope and Change.”

Well, I have almost lost “Hope.”

And I am sick of the “Change” that has taken place in this country.

I am only one small voice and not many will even read what I have written here, but I hope that if I can make one person who is not planning on voting for Mr. Trump think for a minute about what a President Hillary Clinton will mean to the country we love, then I have done my job.

We cannot let the Clinton’s back in the White House. I for one will be voting for Donald J. Trump this fall and I will be praying that God will guide him and lead him to do what is right for this country.

Donald Trump, not my first choice, NOW my Only Choice.