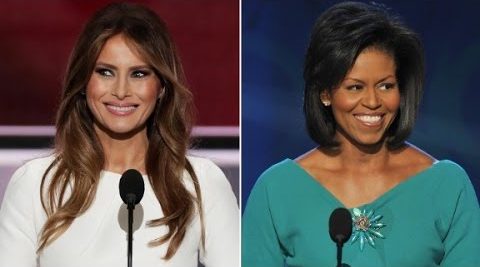 Rather than focus on what Melania actually said, the “usual suspects” in our Democratic Party News Media (DPNM) are suggesting Melania plagiarized Michelle Obama’s 2008 convention speech.

The short answer is no.

Referring to the transcripts of both speeches, here is a breakdown of the facts:

The evidence hardly justifies the “usual suspects” of the DPNM’s attack on Melania:

You get the idea.

As is typical for the “usual suspects” of the DPNM, they completely ignored the irony of the phrases they’ve highlighted — phrases that speak of honor, integrity, and treating others with dignity and respect even if you don’t agree with them:

“… that your word is your bond and you do what you say you’re going to do; that you treat people with dignity and respect, even if you don’t know them, and even if you don’t agree with them.” – Michelle Obama, 2008.

In his nearly eight years as President, has Barack Obama comported himself in accordance with Michelle’s speech?

We’re all familiar with Obama’s serial and oft-repeated lies about the Affordable Care Act (aka, Obamacare), here is a reminder of just a few of his better-known whoppers:

But what about all his other whoppers?

Barack Obama has repeatedly lied to the American people since going to Washington, DC.

Listed below are links to a few partial lists (not all are up to date):

Obama’s word means no more than Hillary Clinton’s word. Because of their well-documented serial lying, both have a value of ZERO.

Obama essentially has shunned Republicans from his first day in office. He is uncompromising and has repeatedly demonstrated he has no respect for those whose views differ from his own.

In recent years, his race-baiting and demagoguing against law enforcement officers has reached dangerous proportions that have contributed to racial tensions and the deaths of more than a dozen police officers throughout our nation.

Perhaps instead of worrying about some shared words of common sense in Melania Trump and Michelle Obama’s convention speeches, the “usual suspects” in the DPNM ought to make a bigger effort to remind President Obama of his wife’s admonitions in 2008.

If only President Obama had been listening in 2008 and had heeded Michelle’s advice.