Do You Believe in Klingons? 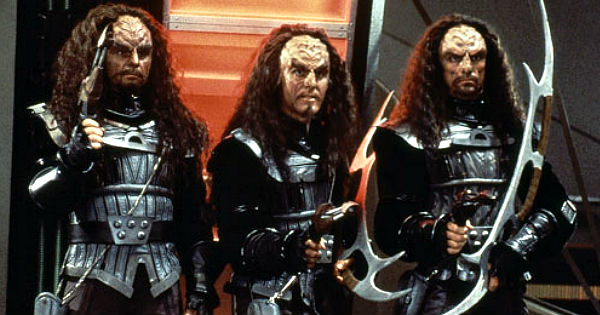 Do you believe that there are really such creatures as Klingons?

Unless you are seriously mentally impaired, I presume you reply, “Of course not. Those are fictional creatures from a TV show.”

But suppose I point out that I have seen Klingons on TV or at a science fiction convention with my own eyes. Assuming you bother to continue such an insane conversation, I imagine that you would explain that these are actors who are using make-up, prosthetics, and costumes to look like Klingons. They are not really Klingons.

All obvious, right? I doubt anyone sees this as debatable, or bringing up any baffling scientific or philosophical questions. Wearing make-up, etc, to make yourself look like a Klingon does not make you a Klingon. It’s just a costume, a disguise, a fantasy. I can’t imagine any intelligent person seriously pondering, “But if an actor had a very good costume, then would he really become a Klingon?” If the hypothetical fan with plastic surgery insisted that he now actually is a Klingon, we would surely say he was getting carried away with the role and needs to stop and take a deep breath. If he persisted, we would say he is delusional, literally mentally ill.

Suppose that a man grows his hair long, shaves his legs, wears women’s clothes, puts on women’s make-up, and straps fake breasts to his chest. Is he now a woman? Or is he a man made up to look like a woman? Suppose he goes so far as to have surgery to give him fake breasts and sex organs. Is he now a woman? Or is he, like the fan who had surgery to make himself look like a Klingon, delusional, literally mentally ill?

A genetic test would show the Klingon fan is still human: he still has human DNA, 46 chromosomes, etc. A genetic test would show the transgender person is still male. He still has XY, not XX, chromosomes. The fake organs he’s had implanted don’t actually work. He cannot become pregnant or give milk to a baby. They’re just prosthetics — stage props.

I’ve seen plenty of Klingons on TV who look a lot more convincing in their role than the average transgendered person. I presume that’s because Hollywood has staffs of trained professionals to apply the make-up and uses the most modern supplies and equipment, while the average transgender person just has himself and what he can buy at a department store.

Suppose that one of your co-workers started showing up for work dressed as a Klingon. What would you do? Maybe at first you’d laugh it off as a game he was playing, that he just thought it would be fun to be weird for a day or two. If he kept it up, though, and if he insisted that he really was a Klingon, you’d likely be thinking that he needs to see a psychiatrist. If he refused to get help, the company might very reasonably decide that someone who has lost touch with reality like this is not a reliable employee. If he doesn’t even know what planet he is from, can he be trusted with company property? What if he decides that the balance sheet is really a star map and starts making adjustments for hyperspace anomolies? Is it safe to let him use power tools? Of course most mentally ill people are not a danger to themselves or to others, but it’s reasonable to be concerned.

Perhaps similar things could be said about people who suffer from other sorts of delusions about their own identity.