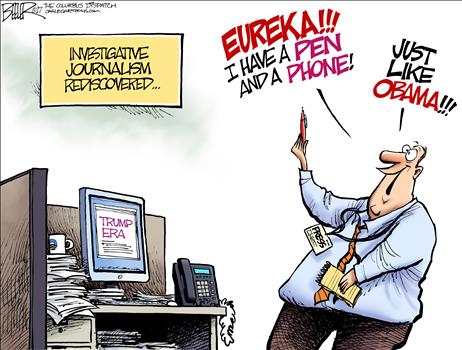 Democrats who do not want Trump to make America great again are putting his entire administration and all of America under siege with Alinsky tactics designed to stop Trump from taking action.  They say they are impartial and unbiased, but that bald faced lie earns them five Pinocchios.

The “Very Fake News” of the leftwing media is not just dishonest reporting, not just twisting the facts to make Trump look bad or appease their followers.  They are actively using Alinsky tactics to distract, defame, demoralize, and immobilize President Trump and the Republicans.  If you haven’t read them then you should so you can understand the purposeful actions of leftwing radicals.  Alinsky’s “Rules for Radicals” is an instruction manual akin to Hitler’s “Mein Kampf” on how to disrupt and overthrow the rightful government in order to gain power to eventually install a socialist dictator.  The Democrat media’s purpose is not to report the news, but to warp the news to detract from Trump’s achievements, and cause so much mayhem that his people are inundated with chaos keeping them from moving forward.

Alinsky’s Rules for Radicals to overthrow the rightful government:

The leftist media has posted numerous false stories meant to make Trump look like he is not keeping his campaign promises as he is and to make his Cabinet and those who assist him appear to be lying.  They publish lies with which the administration either must contend, or allow the leftist lies to stand as the Bush administration did that allowed Democrats to warp the Bush years to be a calamity in people’s minds.  The Donald already knows the result of not countering liberal lies that resulted in people stupidly electing an America hating racist Moslem to be leader of the free world.  Contrarily, the Democrat media ran interference providing cover to Obama as he proceeded to tear down America and set the world on fire.

The Left gets away with telling half-truths by using common events and writing about them as if they are serious problems.  This pretense assumes that the people are largely ignorant of the world and succeeds against the uninformed.  Here are the top five stories that dominated the media last week;

So long as Trump’s people are busy putting out media fires, which are nothing but arson, they are being kept from conducting the important business of repairing the nation.  In addition, protesters are tying up law enforcement by operating like terrorists.  They get a group that acts peaceful to provide cover for the radicals who attack.  This “Resistance” movement is designed to cause injury and destruction while claiming to be peaceful demonstrations.  These are Hitlerian Alinsky tactics used by Nazis and Islamic jihadis.

Leftists claim that Trump’s travel restriction was rightfully denied by a federal judge as unconstitutional.  But the judge did not quote the law in his judgement, only his personal opinion based on innuendo and supposition.  Trump could legally ignore his stay on the EO, but Republicans convinced him to make another, which will also be negated using the same illegal leftist logic.  Liberals claim Trump’s Cabinet to be rife with corruption and Obama to have been without scandal, but that is simply ignoring the Obama administration’s lies and corruption including; Eric Holder, Susan Rice, Loretta Lynch, Jon Koskinen, Lois Lerner, Jeh Johnson, and Hillary Clinton.

In journalism school in the 1970s no one taught that journalists are above reproach, incorruptible, and biblically honest.  What was taught is that journalism is easily twisted by those with their own agenda.  Journalism that is propaganda is called “Yellow Journalism” and that is all that is on display in 90% of media today.  Here’s one reporter’s synopsis of fake stories promoted by the leftist media:

It is up to the voting public to stay informed and not rely on those who seek to deceive them.  A Free Press is necessary to the success of Democracy, but that doesn’t mean they are free to lie without challenge.  The 1st Amendment guarantees your right to speak, not your right to be believed.

Leftist Democrat media delusionally believes they are without sin

Trump wrestles media sharks and shows them who’s the Alpha