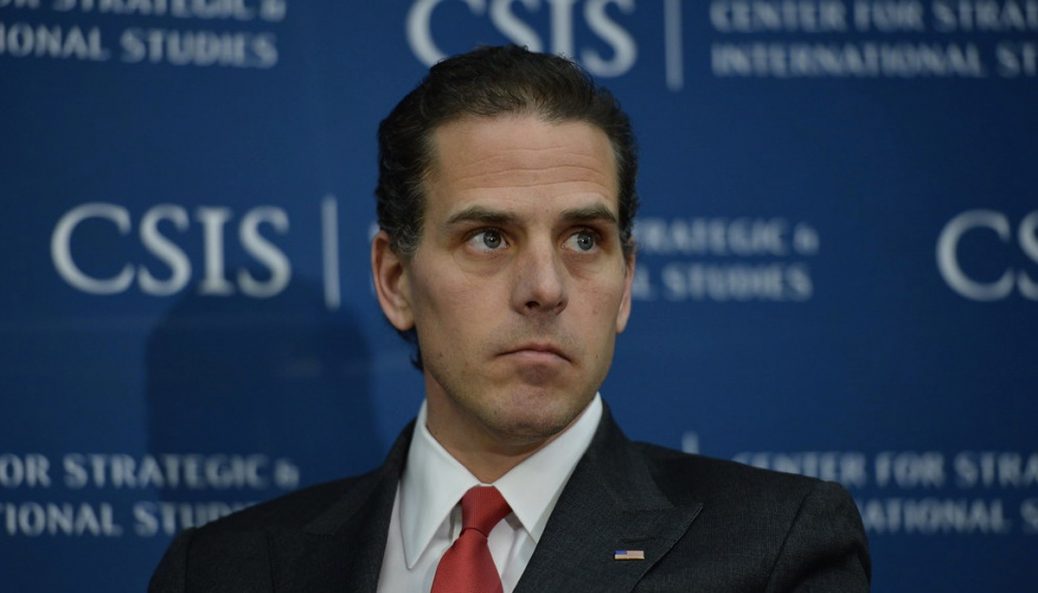 Along with being identified as “the big guy” in emails and televised statements by Tony Bobulinski (a parter of Hunter Biden), there is new evidence that President Biden enriched himself with money his son Hunter received from China, by Hunter paying Joe’s family bills.

As reported on this site

An email sent to Hunter Biden on May 13, 2017, explained a deal between a suspicious Chinese firm and Hunter’s Company, Rosemont Seneca Partners. This was later confirmed by Tony Bobulinski, who was involved in the deal (and ignored by the MSM).

Per a “provisional agreement” explained in the deal, 80 percent of the “equity,” or shares in the new company formed for the deal with China, would be split by people identified only by initials–“H” apparently referred to Hunter Biden, TB was Tony Bobulinski. Also listed were “10 Jim” and “10 held by H for the big guy?” The Jim getting 10% is Joe Biden’s brother James, and “Big Guy” was Joe Biden, according to Tony Bobulinski. 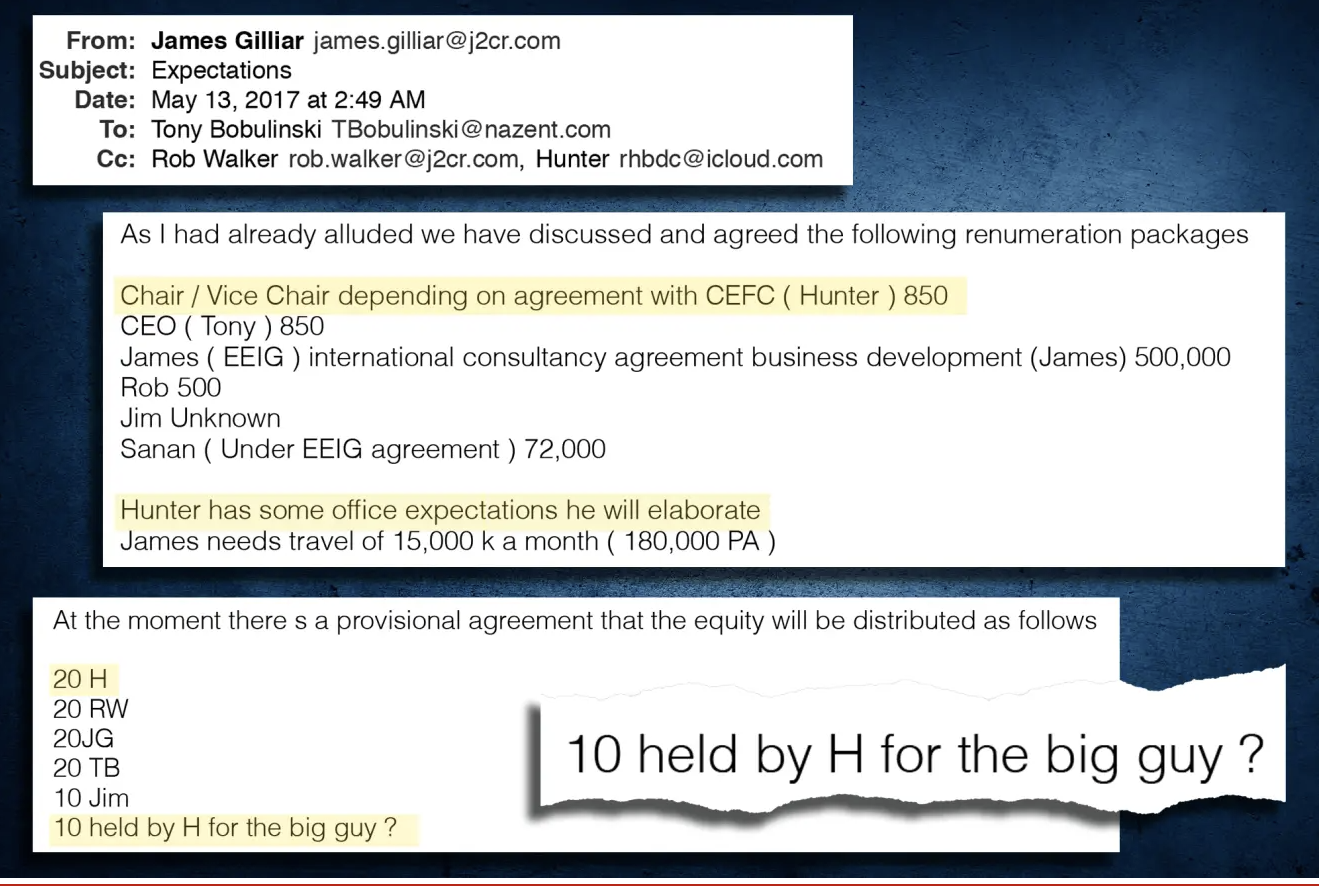 Thanks to the NY Post, we’ve learned of a different way Hunter “paid’ his dad, the future POTUS. Instead of giving him money directly from China, he found an indirect way—paying his family’s bills. According to the “laptop from hell:

Hunter Biden’s access to lucrative financial opportunities also came with expectations — including kicking back as much as 50% of his earnings to his dad, text messages on his old laptop show.

“I hope you all can do what I did and pay for everything for this entire family for 30 years,” Hunter Biden groused to daughter Naomi in January 2019. “It’s really hard. But don’t worry, unlike pop, I won’t make you give me half your salary.” Pop is Joe Biden

The expenses are spelled out in an email to Hunter from business partner Eric Schwerin from June 5, 2010, entitled “JRB Bills.” They concerned the upkeep of Joe Biden’s palatial lakefront home in the wealthy Greenville enclave of Wilmington, Del. JRB are President Biden’s initials.

According to the new article from the Post, there was even more money paid to Joe from Hunter’s China cash, as Miranda Devine wrote on Independence Day 2021.

Emails from June 2010 from Hunter’s business partner, Eric Schwerin, show that Hunter was hit up about bills from several Delaware contractors for maintenance at his father’s lakefront property.

We know from an e-mail on June 5, 2010, with the subject “JRB bills” to Hunter from Eric Schwerin, his business partner at Rosemont Seneca, that he was expected to foot hefty bills to Wilmington contractors for maintenance and upkeep of his father’s palatial lakefront property. Joe’s initials are JRB, for Joseph Robinette Biden.

The bills that June included $2,600 to contractor Earle Downing for a “stone retaining wall” at Joe’s Wilmington estate, $1,475 to painter Ronald Peacock to paint the “back wall and columns” of the house, and $1,239 to builder Mike Christopher for repairs to the air conditioning at the cottage of Joe’s late mother, Jean “Mom-Mom” Biden, which was on his property and which he would later rent to the Secret Service for $2,200 a month.

“This is from last summer I think and needs to be paid pretty soon,” wrote Schwerin of Christopher’s bill.

Why does any of this matter? I am not an attorney, nor have I ever played one on TV. Hunter’s money deals may or may not have been illegal. However, none of the revelations I have read about President Biden’s participation in Hunter’s business deals (and there are others) are illegal. Lying to the American people may be immoral but not illegal.

The real issue is the man behind the Resolute Desk has deep financial ties to the CCP. And is foreign policy seems to be biased toward a U.S.existential threat that is threatening America’s economy and militarily.

In March, the Biden administration ditched tariffs on over 350 products made in China — everything from breast pumps to X-ray tables and even some food products.

In two meetings with Chinese “diplomats,” American negotiators were improperly berated by the Chinese team, Biden said and did nothing. Perhaps he didn’t want to upset his Chinese “bankers.”

He justifiably called Putin a war criminal for his actions in Ukraine. Why hasn’t he said the same thing about China’s attempted genocide of the Uighur Muslims.

Maybe because of his experience with the Ukrainian energy company Burisma, we learned from the infamous “laptop from hell” that in 2014 when Joe Biden was VP, Hunter was negotiating a colossal oil deal involving a state-owned Chinese energy firm, the recently ousted Kazakhstan Prime Minister.

Biden ordered a study about the Chinese involvement in the creation of COVID-19. while the “results” were announced, the complete analysis was not released “the agencies said that two hypotheses for the virus’ origin remain possible: either natural exposure to an infected animal or an accidental lab leak.” Why did they come to that conclusion? For some reason, Joe Biden doesn’t want us to know;

Like him or during the first two years of the Trump presidency, the MSM and Democratic party kept pushing the false story that Donald Trump was beholden to Vladimir Putin. This was despite Trump’s extensive sanctions on Russia. With the invasion of Ukraine, Biden justifiably raised those sanctions. Despite the worsening of the Chinese treatment of the Uighur Muslims, Biden reduced the sanctions on China.

China has been stealing American technology and planted a spy in the office of Rep. Eric Swalwell (D-CA), but Biden has still favored China. Why didn’t the POTUS punish the CCP-run country?

The party in power impeached Biden’s predecessor twice for fake issues, and most of the MSM refuse to investigate Biden’s financial relationship with China. And totally ignoring Biden’s tendency to put China’s needs before the needs of America. Perhaps it’s because China helped to make Joe and his son rich. Was the money he received from the CCP his incentive to favor China? Unless there is an actual investigation, we will never know for sure.