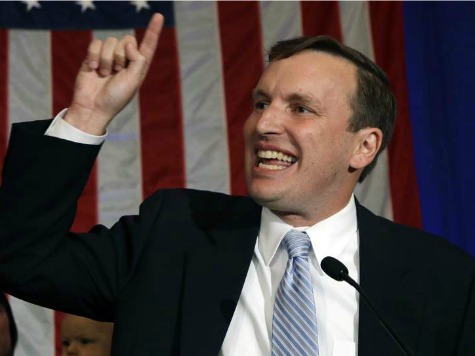 So here we go. The poor families and loved ones of 49 dead Americans, and what do liberals do? What would one expect? They are turning it into a political event. This is the disgusting, uneducated foolish mentality of the left, which is not only ignorant and completely unaware of what the U.S. Constitution is and means to America as a whole.

A Democratic senator on Wednesday launched a filibuster to force a vote on gun control legislation three days after 49 people were killed at a nightclub in Orlando, Florida, in the worst mass shooting in modern U.S. history.

Why would anyone with the knowledge and background history of the U.S. Constitution, want to filibuster to change it? This wannabe Ted Cruz is now trying to follow in Ted’s footsteps, but he is doing nothing except shining a much-needed light onto the liberal agenda, and the ignorance and uncaring approach to the Constitution.

Connecticut Sen. Chris Murphy said he would remain on the Senate floor “until we get some signal, some sign that we can come together,” as he also evoked the Newtown school shooting in his state in 2012. His plea came as presumptive Republican presidential candidate Donald Trump said he would meet with the National Rifle Association about the terror watch list and gun purchases.

“For those of us that represent Connecticut, the failure of this body to do anything, anything at all in the face of that continued slaughter isn’t just painful to us, it’s unconscionable,” Murphy said.

Twenty children and six educators died in the shooting at Sandy Hook Elementary School on Dec. 14, 2012. Murphy said he cannot look into the eyes of those children’s relatives and tell them that Congress has done nothing since.

Not to mention that he needs to at least get his facts correct. He cannot name the actual gun used in Orlando, does not acknowledge that the same people were in two different shootings that Obama was quick to denounce, one being Sandy Hook. While many Americans are not aware, there has been a massive attempt by liberals to change America to a socialist country controlled by the UN and has created events throughout Obama’s presidency to do so.

We have two ways to look at shootings, one the liberal viewpoint which would remove the constitutional amendment of the right to bear arms or the one that Constitutionalist believe which is to make sure all Americans are equipped to protect their property, and loved ones by the guarantee of the ability to bear arms. Which do you believe would have helped Orlando? People who were armed shooting back, or only the criminal with the gun shooting so many people?

It’s been nearly a decade since Congress made any significant changes to federal gun laws. In April 2007, a gunman at Virginia Tech was able to purchase his weapons because his mental health history was not in the instant background check database. Thirty-two people died in the shooting.

The law aimed to strengthen the instant background check system by increasing the quantity and quality of records entered into the system, but the amount of money provided to help states improve their contributions has lagged well below what was originally envisioned.

Until the Federal Attorney General and American peacekeepers start upholding the current laws, then the mentally unstable, and criminal element will still find ways to get guns, and if we take away the Competent and law abiding citizens, who will end up with the ability to kill, and who will not have the ability to protect themselves, their property and their loved ones?

Murphy is seeking a vote on legislation from Sen. Dianne Feinstein, D-Calif., that would let the government bar sales of guns and explosives to people it suspects of being terrorists. Feinstein offered the amendment in December, a day after an extremist couple killed 14 people in San Bernardino, California, but the Republican-run Senate rejected the proposal on a near party-line vote. He also wants a vote to expand background checks.

The Orlando shooter, Omar Mateen, was added to a government watch list of individuals known or suspected of being involved in terrorist activities in 2013 when he was investigated for inflammatory statements to co-workers. But he was pulled from that database when that investigation was closed 10 months later.

We have enough laws on the books, we just need to make sure that they are followed and enforced.

Time to tell liberals that enough is enough and the Constitution is our guide, not their whining, and incompetent arguments to the contrary.