Some Debate Advice for Donald Trump 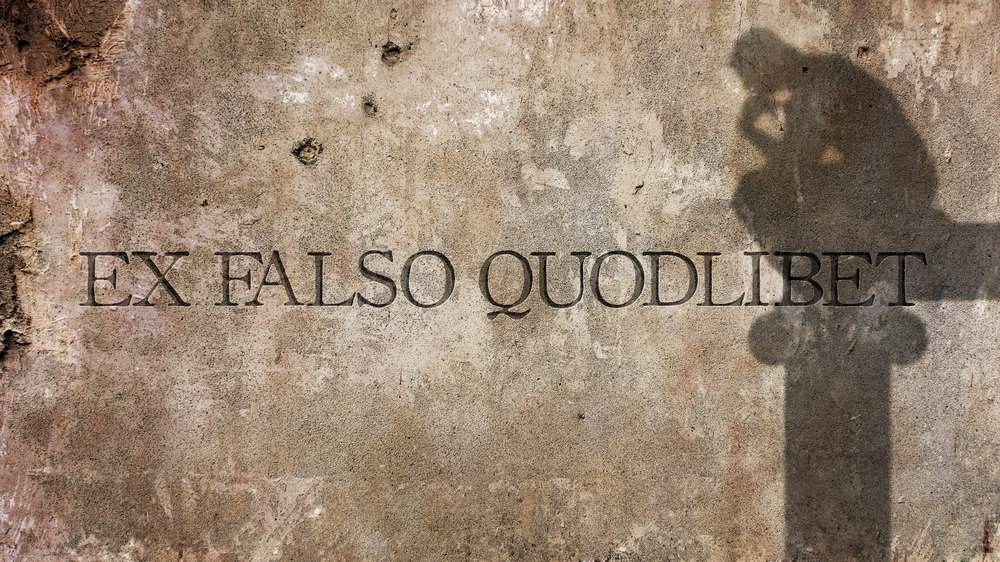 Ex falso quodlibet. From false premises one can prove anything.

When a leftist sets you up for a fall, don’t trip.  Word of the day – premise

The Art of Politics is making yourself look grand and your opponent look foolish.  One of the ways of doing this is through the tactics of projection and deflection.  This is a lesson that Donald Trump needs to learn and learn fast.

Lying liberals always ply conservatives with questions based on false premises often comprised of double negatives, twisted meanings, and confusing syntax in order to misdirect.  A false premise is a question designed to make any answer wrong like, “Do you still beat your wife?”  Liberal’s premises are always based on lies they want to promote.  Never walk into the trap by answering a liberal who tries to set the stage on the basis of their lies.

Liberals will set up a false premise to create a false characterization of conservatives by posing false accusations to make their opponent appear to be in the wrong.  Democrat Sen. Kaine attempted this in the 2016 Vice Presidential Debate with Republican Gov. Pence.  Here is that exchange;

Kaine: “I’d love to hear Gov. Pence tell me what’ so enjoyable or comical about nuclear war?”

The premise of this question is; Gov. Pence believes nuclear war to be enjoyable and comical.  This is the same as Democrats who say, “Republicans want to drink dirty water and breathe dirty air.”  The basis of the question is stupid in proposing that there are people who believe nuclear war is fun and amusing or that drinking dirty water or breathing dirty air is healthy.  Obviously no one believes nuclear war is fun and no one wants to drink dirty water.  By posing this question with its false premise, Sen. Kaine tries to set up Gov. Pence to trip him up and make him look like a fool or a liar.  But the governor is far too wise to fall for this stupid trap.

Liberals will always attack because they can never defend their ideology which is founded in falsehood.  If you defend against their attacks, or even when you ignore their attacks, then they will accuse you of either lying or having something to hide.  This is not when you say pretty political words like “disingenuous.”  It’s when you say, “You’re full of sh** and a f***ing liar,” and go on the attack yourself.  You don’t get distracted by their false accusations, but expose the truth about liberal lies.

This is where Donald Trump goes wrong in defending himself against every liberal attack and why he falls in the polls.  It’s not because he isn’t smart.  It’s not because he is foolish.  It’s not because he has a bad temperament.  It’s only due to his inexperience in the world of political lies.  Trump just needs to learn to focus on what is important and ignore what is a bunch of crap.  He needs to learn to attack Hillary with the truth and ignore her attacks of lies.  Who cares if he called a Miss Universe “Miss Piggy” for getting fat 20 years ago?  Hillary and her husband did far worse to his “bimbos.”

The Donald just needs to stay on point and hammer home the disastrous failures of Hillary Clinton’s and Barack Obama’s policies.  He needs to learn to recognize a false premise and distractions and not be waylaid by liberal BS.  Hillary has nothing to offer America except more of Barack Obama’s destruction, which is why she concentrates all of her attention on the character assassination of Donald Trump.  While Barack and Hillary have been wrecking America, Trump has been working to build it up and now stands as the only man who can help this nation recover from the catastrophes of the Left.  Hillary campaigns on her “good intentions,” but she is only paving our road to Hell.

The psychology of liberalism

Understanding the psychology of liberals is the key to defeating their radical, foolish ideology…

READ MORE OF THIS ARTICLE AT LIBERALSBACKWARDSTHINK.COM…