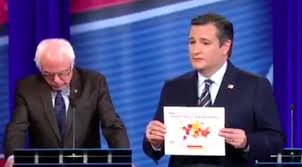 Ted Cruz completely owned Bernie Sanders in the CNN debate on the “future” of Obamacare. Ted Cruz was confident and astute in presenting his arguments, whereas Sanders continuously had to keep on going back to insidious Socialist rhetoric and ad hominem attacks by insinuating that Cruz wants to “kill the elderly”. Sanders’ posture was closed, tight, hunched, and did not radiate confidence the way Cruz’s body language did.

It is quite obvious that Obamacare is a disaster. Premiums are way, way up, and health care has become almost unaffordable, and have really hurt a lot of businesses. It really, really showed in the election last year. It was just amazing how Cruz pulled up a map showing the 70% of the counties in America which had only one or two health care options, and also which resembled pretty closely the electoral map. Time and time again, liberals demand free everything, health care for everyone, minimum wage, except that there’s a trade-off in that if businesses are forced to cover more health care and higher wages, this can only be done by shrinking businesses and taking jobs away in order to cover the surplus.

What was especially heinous was how Sanders attacked the woman who asked the third question, the hairstylist from Texas, informing her that she has no options but will be forced to pay more, which will hurt her business. Sort of like what Gordon Bajnai, Socialist prime minister of Hungary for a single year told the nation: “It’s going to hurt”. In other words, feel the Bern.

What was really a grand slam on Cruz’s part was when he mentioned the fact that tens of thousands of Canadians are getting health care in the United States; how even the governor of a Canadian province had to have heart surgery in the United States, and that even health care providers in Sander’s own state of Vermont advertise to Canadian citizens.

Sanders would have the United States follow the example of Socialized Europe. I myself have lived in Hungary, an Eastern European country for 18 years. We had socialized medicine. There were so many long lines to get medical attention. A lot of our wages went away due to taxation. I made the equivalent of $750/month, and got $500 out of it after taxes. I never owned a car in Hungary. I knew a girl who had a brain tumor and had to be treated in Vienna where they had better care. Many Hungarians were like this. The quality of care was also to be desired. A lot worse than the United Kingdom which is a Western European country.

Cruz was spot on.

Sanders should be really ashamed of himself, especially for trying to promote a system that has been proven to be false and a failure. I dare Sanders to go to Hungary to get medical attention, but he won’t, because he’s a rich senator who can afford better care in this country, and he also doesn’t have to pay as much taxes as he should.

Obamacare is going down, and that’s for sure.