Conservatives Who Aren’t Voting for Trump: Do You Really Want Hillary? 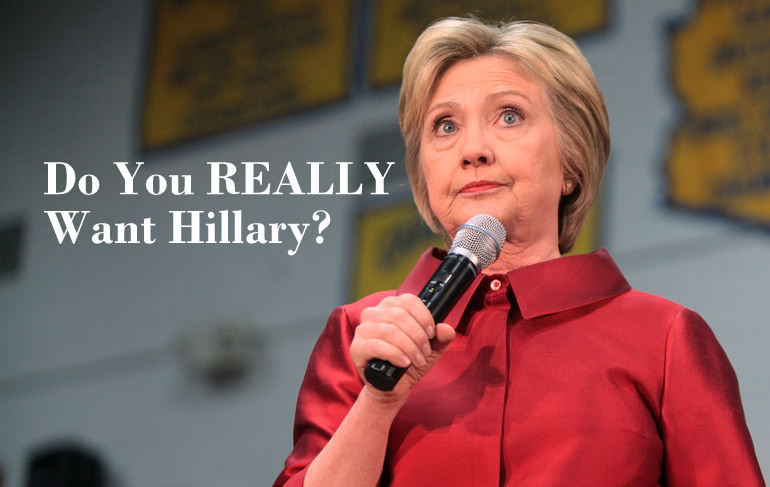 I am stepping down off my pulpit and back on my soap box once again.
I am writing to those who just can’t force themselves to vote for Donald Trump. Those who in a normal election would pull the lever for the Republican candidate, but just can’t this time.

I have to ask you this question.

Do you REALLY want Hillary?

Do you really think this country can stand 4 to 8 years of another Clinton in the White House?

Do you really think we can recover from the Judges she will appoint to the Supreme Court?

Do you really think we can deal another 9/11 type attack or of the kind of attacks we have seen in Europe this last year because of her open Boarder policy?

Do you really think her economic policies of tax the rich and big business will bring the economy roaring back?

Hillary, it has been shown, will lie, cheat and steal her way to the White House if she can. We have seen through the leaked E-mails and undercover video’s that she will do anything she needs to win.

Donald keeps tell us that the system is rigged and he is right. The main stream media is on her side and will hardly cover anything that shows her in a bad light, while they go overboard covering anything bad about Trump. The polls are skewed toward Hillary to make it seem that her lead is larger than it is or that she is leading at all.

This election is TOO Important to sit back and refuse to see the writing on the wall.

We must vote for Donald Trump. We cannot just stay home or leave the top of the ballot blank or vote for a third party just because Donald is not the kind of Republican we are.

They, meaning the other side, want to discourage us and keep us from going to the polls and voting at all. We must not let this happen.

Even if you live in a state that Hillary is way ahead in, you must NOT stay home; you MUST get out and VOTE. The support that Obama received the last two elections is not the kind of support Hillary has. There are many who just can’t stand her, even though they voted for Obama. They are not excited.

But Donald’s supporters are excited; all you have to do is look at the size of the crowds he’s gathering.

If we want to take our country back from the liberal mess it’s becoming, we must vote and take it back.

I live in Minnesota and cannot remember when my vote for a Republican President counted for anything, but this time it just might if all of those who feel the way I do get out and vote.

I know that Donald is not perfect, but let me ask you, what candidate is?

He is our choice and make no mistake about it, Hillary Clinton or Donald Trump will be the next President of the United States.

So, if you do not want Hillary selling off the Lincoln Bedroom again and appointing activist Judges bent on ripping the Constitution apart, then you MUST Vote for Donald Trump and Mike Pence.

No matter what state you live in, no matter what the polls for your state tell you, you MUST VOTE and Vote Trump.

And if you still can’t bring yourself to do it, then go back to my first question and ask yourself…
Do you REALLY want Hillary?