America: Love it or Leave 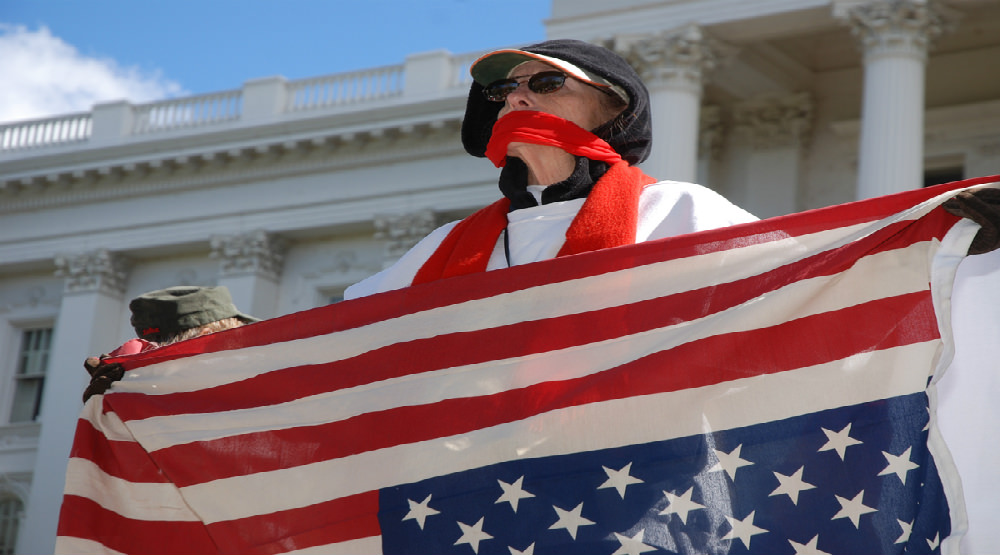 Irony…and other stuff.    In the long, and sometimes inglorious, history of the United States, there have been several incidents which might have torn a lesser nation to pieces.   We made a terrible mistake embracing slavery…but to our credit, we abolished it, after a bloody not-so-civil war.   Until the mid-1960’s we had segregation but we did away with that…at least on paper.   To say that the United States is a perfect nation in every way would be a false statement, but we do try to rectify our mistakes and we are forty miles ahead of whatever country is in second place.   What strikes me as ironic are the protestors.   Many have no idea why they’re protesting, or what they’re protesting for or against.   The irony comes in when you point out to them that their actions in this country could get them jailed or killed, in many other countries…but the United States Constitution protects their rights to be stupid.

In my Navy career it was my distinct pleasure to be able to travel to many foreign countries.  The memories that stay with me are pleasant ones…but it was a different world then.  There is no amount of money now that could get me to travel anywhere outside of America…and already there are places in my native land where I would definitely feel uncomfortable.   Back then, in the 1950’s, going overseas meant that you’d experience things that you might never see again, and I took full advantage of it.  Today, Paris, the city of light, is getting to be huge trash heap.  London, with its splendor and traditions, has seen gruesome murders in broad daylight.   Rome, the eternal city, the home of the Vatican, is under a stealth siege, with the invaders vowing to complete now what they did not do centuries ago.

Now, I’m going to throw in one of my favorite Ronald Reagan quotes.  He said “Freedom is never more than one generation away from extinction. We didn’t pass it to our children in the bloodstream. It must be fought for, protected, and passed on … or we will spend our sunset years telling our children’s children what it was like in the United States when men were free.”   Take a moment and think about that.  America today is vastly different from the America in which I grew up, as it should be.   We always want to be improving ourselves and our country…but are we?   My America was revered throughout the world…maybe even feared throughout the world.   We are not that now.   We have degenerated almost to a third-world country through horrible mistakes by our government.   Can the republic be saved?   Yes, I think it can, but, like a successful marriage, it takes daily maintenance to make it work.

As an example of just how far political correctness has warped free speech…Five Boulder Prep High School students in Colorado were expelled over their Facebook hate group, where they were calling for the executions of Jews and Blacks, The Daily Camera reported last week. Local media report that Boulder police discovered the Neo-Nazi cell after one of the member had committed suicide “to show allegiance to the Nazi party.” Police is investigating reports of threats and harassment of a student at the high school by the group members.   The chat group was reported by a parent of one of the students. The group’s “second-in-command” told police, “the whole thing was ‘funny,’” assuring them he had no intention to actually do any of those things.

“It was a shock to the community,” Scott Levin of the regional Anti-Defamation League told CS in response to the revelations. “It isn’t as if there is any identifiable group [in Boulder] that is advocating this. There’s a lot of hateful rhetoric going on in this country right now, and that has just empowered some teenagers.”   An estimated 15 students participated in the “4th Reich’s Official Group Chat” on Facebook, according to a Boulder police report, which said members discussed “killing all Jews and Niggers,” posted images of guns, and discussed “the final solution” and “white power,” and ways to “recruit more members” to complete their mission. The chat group’s “4th Reich” title is a reference to a successor to Adolph Hitler’s Third Reich. In fact, the chat group’s leader identified himself as “The Fuhrer,” and members adopted Nazi military titles.

One entry went: “You can hang Jews on trees, shoot them right in the knees. Gas as many as you please,” according to the police report.   Lili Adeli, headmaster at Boulder Prep, told Daily Camera the school had addressed the suicide and the Facebook chat’s horrifying language. “We did a lot of work with the students to help ensure their safety and mental health and healing,” she said. “It can bring up their own thoughts of suicide and previous trauma.” This includes checking on students via the phone, including text messages outside of school hours. “We’ve continued to keep the lines of communication open,” she said.   Adeli also stressed that school staff have made it their top priority to educate students on inclusiveness and the importance of speaking out against “derogatory language.”

Parting shot… How’s THAT for educating the next generation of what might turn out to be our leaders?   Doesn’t that just make you feel all warm and fuzzy?   It sickens me…but then, I’m from the old school where love of country actually meant something.