How Clooney’s “Refugee” Lecture is Working for Him 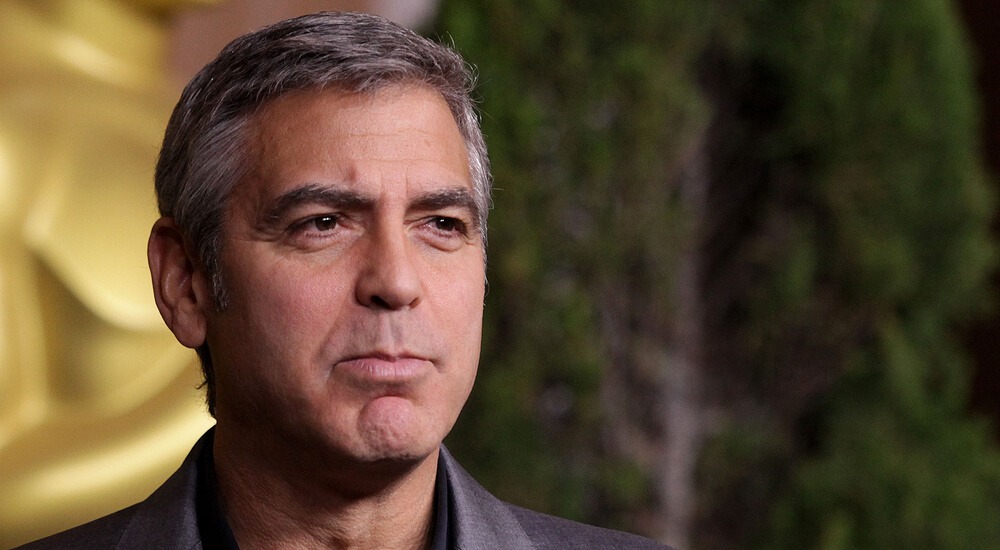 It is amazing how movie stars who are sheltered from the world, tucked in mansions behind iron gates with security guards, feel they can dictate how those not living in mansions must live their lives.

George Clooney who has earned millions with his movies, is a typical Hollywood Democrat who would never live WITHIN a Communist-socialist society, but IS comfortable on the hill above it. He is an Obama-Hillary booster and supports everything they stand for.

And he has unwittingly, by his own actions, demonstrated exactly what a Democrat is. And it is not pretty, like he is (or thinks he is).

Clooney, along with his high profile human rights lawyer, Amal, live what can only be called, “a cushy life.” They are two of the many outspoken critics of Donald Trump who wants to ban certain migrants from entering America.  Clooney describes Trump’s idea as “massively stupid,” and took it further by calling Trump, “a zenophobic fascist.”

The actor has slammed the U.S. itself, the country that made him wealthy;  “America is a nation founded by immigrants,” he preached,  “and we are forgetting who we are.”

Clooney actually feels that he is being ‘noble’ to want to welcome migrant refugees to come on in.  Indeed, he and his wife have pushed for an “open-door policy” similar to what Germany has.  The actor went on to say that “The U.S. is not doing enough to help alleviate the crisis in Syria,” even though Obama has vowed to accept 10,000 asylum seekers from Syria this year and many more in 2017.

Donald Trump has a more sensible approach. Rather than just letting them flow through open gates. He feels that they should first be cautiously vetted to weed out Jihadists in their midst. Plus they should learn to speak English before coming to these shores.

BACKFIRE! The news of Clooney’s ‘noble’ idea encouraged ‘migrants’ to flock to his luxurious multi-million dollar 18th-century Italian mansion set on Lake Como, and set up camp outside the gates.After all, Clooney did say “that’s what we must do, welcome all comers.”

Starting with a few hundred immigrants, that number is rapidly growing, much to the consternation of his ultra rich neighbors including, Donatella Versace, Richard Branson and Madonna.  After all, Clooney said, we should ALL welcome them so that would, in proper thinking, include himself, even though that is NOT leftist thinking.

His neighbors are not happy with the results of Clooney’s public comments. One resident watches them arriving at the San Giovanni station and said, “They are not poor hungry refugees but they are big and strong. People here in Como don’t like them. There are simply too many of them.” Another neighbor stated,  “It is good for Switzerland that they have closed the border to migrants, but it is bad for Italy.”

The refugees leave trash laying on the ground throughout the area instead of finding a container to dump it in. This marks every area they have settled in or just passed through.

Now, in true Hollywood fashion, Clooney has put his mansion up for sale. He said the reason, now get this, is because he will have trouble with privacy concerns now that the paparazzi knows where they live. (?)

Sure.That’s it! Of course. It is not because hundreds of refugee immigrants have camped out in front of the gates of their home to partake of the hospitality seemingly offered by his public comments, and, they are not going away.

That has absolutely nothing to do with his selling the property don’cha know. Truth is, his fight or flight impulse simply kicked in since he was forced to live in the conditions he expostulated to America.

And this is an example of true socialist democrat-Communist rule-making. It is OK to dictate what must be done by everyone else, but does not affect the leaders. This defines a Socialist Democrat.

The rich reds must not be inconvenienced by the laws they have pushed on others. Laws are only for the peasants. But I do confess there was some chuckling on the part of MilesTones when it was learned that for Clooney, the chickens had come home to roost. Yep, Poetic justification at last.

Our sincere appreciation to journalist Alice Shane of The Daily Mail for alerting us to this news item.

STOP THE PRESSES- THIS JUST IN: Trump foes now claim that Trump’s wife, Melania, who riveted the GOP Convention with her speech last night, is guilty of plagiarism, claiming that Melania stole that speech from Michelle Obama. (!)  How’s that again?

Interesting; the DemoRATS will NOT leave their sinking ship, but are hanging on for dear life.