Chuck and Nancy can Pound Sand 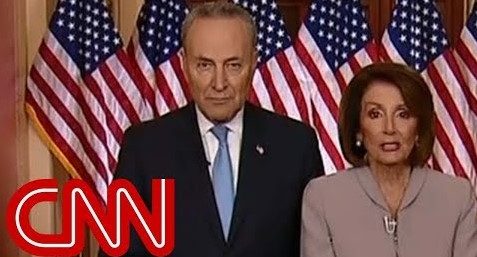 When Barack Obama was running for office in 2008 he, like every other candidate claimed to be the champion of America’s infrastructure. He even pointed to Detroit claiming he was the man for the job. More than 10 years later Detroit is still mostly a shithole as is Baltimore, Chicago, Los Angeles, San Francisco and many other large cities across America. America’s roads are a mess in many areas, water and sewer lines antiquated and falling apart, and we all know how defenseless our power grid is to predictable solar activity which is long overdue.

What did the Obama Administration spend infrastructure funding on? Energy alternatives all of which have come up as inadequate or complete failures. Your tax dollars with very little to show for it. Having nice roads, sidewalks and a more secure power grid might have been a better way to go. All of these things by the way, would conserve or preserve energy.

So it amazes me when I hear Democrat leaders complaining about the President not wanting to work with them on infrastructure. How long exactly have the complainers Pelosi and Schumer been in office anyway. They look like they have been in office since Fred Flintstone started mining rocks. In all those years why didn’t they do something to fix some very serious infrastructure problems that America has? Trump has been in office a little bit more than 2 years and he is the problem?

Trump was right to walk out on Pelosi and Schumer.

Pelosi and Schumer have no interest in working with President Trump at all and for the last 2+ years the Democrat Party and the Deep State have been committing treason against both the President of the United States and the American people with their obvious attempt at a coup d’etat. Why would anyone in their right mind want to work with these people? It would have been a waste of his very precious time as Leader of the Free World.

I for one commend the President for being a true leader and saying enough is enough. Never have I been so proud of any president over the last 50+ years. He put up with their sedition long enough and so haven’t the American people.

Chuck, Nancy go home to your constituents in the upcoming election and tell them what you have accomplished during the last 10 years. Tell them about all the great infrastructure projects you’ve completed and how you so poisoned the well that you couldn’t convince the new president to work with you. In fact all the Democrats in Washington will be getting just that opportunity after the summer when the primary season begins. What will they have to say.

President Trump will have plenty to say. He has managed some incredible success without Chuck and Nancy’s help. In fact they had nothing to do with any of Trumps successes and rallied against each and every one of them. Just like the press.

But hey maybe it will all be ok after all. Maybe Chuck and Nancy and Co. were so shocked by the President telling them to pound dirt that it opened their eyes to the wickedness of their ways and in a short time will come to work and cooperate with President Trump for the best interests of the republic. What it could happen. And monkeys could start flying out of my butt too.