The Case Against Dynasty in America 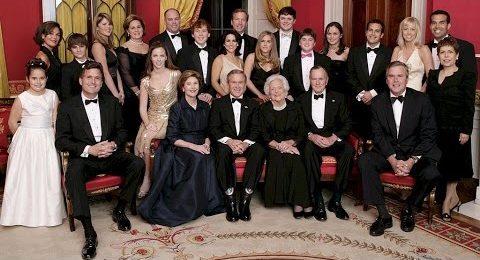 The Merriam-Webster dictionary defined ‘dynasty’ as a succession of rulers of the same line of descent, a powerful group or family that maintains its position for a considerable time. Dynasty could be in business or other career. In this regard, America has its own share of dynasty. However, most people understand dynasty as a political form of dominance by a specific family.

In ancient Africa there were many kingdoms and with them a variety of dynasties. Probably the most popular dynasties were of the Chinese. There were more dynasties than the rest of the world put together starting from Xia in the 21st century BC to Qing that lasted from 1644 through 1911 AD. In modern time as in the old, dynasties are staples of monarchs such as there are in many Arab countries, and in some pockets of totalitarian regimes such as in North Korea. There are figurehead or ceremonial dynasties without political power such as found in Great Britain and Spain. Yet there are few cases of children democratically succeeding their mothers as exemplified by the Aquinos in the Philippines and India. A clear dynasty was established in India with so many generations of father to daughter to son and even almost to daughter-in-law. The Neru-Gandhi family registered as the first, fifth, eighth, and ninth, four out of fifteen Prime Minister of India. Peron was another near stable dynasty when Isabel Peron succeeded her husband as president of Argentina. In many of the above examples, individuals inherit the positions and the corresponding responsibilities.

Most Americans would agree that the Kennedy family was probably the most flamboyant to ascend to the presidency. The willing national press nicknamed the John Kennedy presidency as the ‘Camelot’. With money, style and glamorous wife to match, John Kennedy conveyed an aristocratic family that is destined to reign for a long time to come. It was not surprising that Bobby Kennedy and later Ted decided to replace their older brother to carry on the ‘Camelot’ image. For couple of decades, there was always a number of Kennedy in the Congress or prominent in various states’ politics. The status of their family name help some of them to get away with things that other politicians could only dream of.

Today, there are two families that could be considered dynasty. The Bush family came to national prominence in 1980 when George H. Bush became the vice president of Ronald Ragan. Typical of dynasties, the Bush family has the money and influence. With the defeat of GH Bush in 1992 after one term in office, the Bush era seemed over, although George W. Bush was the governor of Texas and his baby brother, Jeb Bush, was the governor of Florida. While the Bush family was leaking its wound from the defeat, the Clinton family took over the presidency and started the establishment of its own dynasty. Unlike other dynastic family before it, the Clinton family was almost dirt poor. Like the Kennedy however, any wrong by the Clintons never stuck. By the time Bill Clinton left office in January 2011, the reactivated Bush dynasty took over while Hillary Clinton was preparing herself for a run of the White House by becoming a NY senator. For a time it appeared as if the presidency will yo-yo between the Bush and Clinton families.

The Bush and Clinton dynasties were supposed to lock horns in 2016 general election. The Democrats had coroneted Hillary Clinton as the undisputable democratic presidential nominee more than a year before she even announced her candidacy. All who-is-who in the Democratic Party had pledged their support to her. Like a coroneted queen, Hillary assumed that no one dared challenge her. She behaved as if all was a formality and it was a matter of time. After all, it was her birthright, which nobody could deny. She and her husband left the White House only sixteen years prior and Obama compensated her with globetrotting position for four years to give her maximum exposure and to keep her quiet. How well she performed in those previous positions doesn’t matter. In spite of obvious flaws, she is a Clinton! If she could just pull this one off, then Chelsea would be in line in another sixteen years after which Chelsea’s daughter would take her turn, and so on. After all, it is a dynasty! The only thing lacking was money. And to make sure they meet that qualification, Bill and Hillary did everything to amass enormous amount of wealth to complete their résumé for dynasty. Although they were dirt poor few years prior, they became multimillionaires within few years of leaving the White House without anything else, but speeches to sell to the highest bidder.

At about the same time Jeb had amassed a war chest of unbelievable amount of money he needed to secure the nomination of the Republican Party. Every important people in the Republican Party establishment were securely behind him. He was the favorite and the person to beat. Both his father and brother had done it, so it is a matter of routine to go through the primary process. Both Hillary and Jeb are dynasty candidates who assume that the nomination is their birthrights.

Both the Democratic and Republican Party establishments presumed that 2016 presidential election would follow the normal process of coronation. To give an illusion of competition Bernie Sanders was initially encouraged to produce a token opposition to Hillary. Except for Bernie himself, everybody wrote him off as a 74-year old man who would just make some noise before the official Hillary’s coronation in Philadelphia. Soon the carefully choreography began to produce unwelcomed encore. But because of prior commitment, the Democratic Party superdelegate elites could not recall their pledges. Although a large section of the rank-in-file voted for Bernie, the elites are joined at the hips with Hillary with all her baggage.

Unlike the democrats, the republicans have no superdelegates. So, the situation was a lot more dramatic that the party elites could not ignore. The rank-in-file of the party handily rejected the ordained. And it seemed as if anyone supported by the party elites was quickly booted out. It started with Jeb followed by Chris, Marco, even Ted. While Hillary was still bleeding from Bernie’s inflicted wounds at the poll, Donald Trump, who was supposed to hemorrhage through September in Cleveland, quickly became victorious. The funny thing was the reaction of both Hillary and Jeb toward their rivals. Hillary’s reaction is fairly muted knowing fully well that she needs Bernie’s support to have a chance at the White House. In contrast, Jeb and his family continued to openly go against the current. The Bush family, in association with the elites of the Republican Party continued to make waves as if each of them has more than one electoral vote to cast in November. They depend on others like them, such as John McCain, Glenn Beck, Bill Kristol and Mitch Romney. And this time, they feel comfortable being in cohort with the national press corp., which is always against any Republican candidate. In spite of the support the family received when they were at the helm, they decided to throw tantrums like spoiled brats, simply because Jeb, their dynasty candidate, was rejected by the voters. It shows why we don’t need dynasty in America.