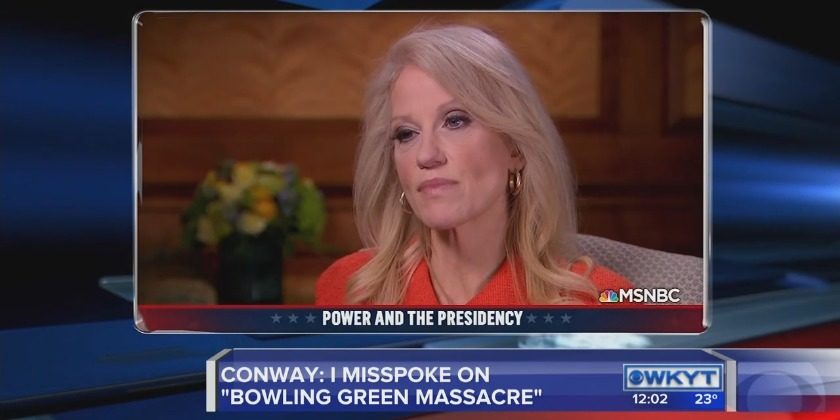 Kellyanne Conway, current counselor to President Donald Trump and his former campaign manager, is, arguably, the main person to help put Trump over the finish line to win the Presidency. She has generally been, even in cases where Trump has done something wrong, able to put the negative story to rest easily. There is no arguing that Conway is good at what she does.

The media have been looking for months for a moment to pounce on Conway for any reason. They finally got their chance on Thursday night, when Conway was interviewed by MSNBC’s Chris Matthews on his show, Hardball.

Matthews questioned Conway on President Trump’s executive order regarding the moratorium on immigration from seven countries that are hotbeds of terrorism. She responded that former President Obama had a six-month ban on the Iraqi refugee program after two radicalized refugees planned the Bowling Green massacre, and that most people don’t know that because it wasn’t covered.

However, there was never actually a “Bowling Green” massacre. Conway realized her mistake and clarified it, stating that she was referring to two Iraqi refugees arrested in Bowling Green, Kentucky, who were caught trying to sell weapons to Al Qaeda in 2011.

But the most laughable of all was when Chelsea Clinton, from the family that never leaves, chimed in. She tweeted, “Very grateful no one seriously hurt in the Louvre [attempted attack in France this past Friday] attack… or the (completely fake) Bowling Green Massacre. Please don’t make up attacks.”

It’s laughable how this comes from someone whose mother is arguably the most prolific lair in politics, and has made up stories about attacks, such as landing under sniper fire in Bosnia or blaming the Benghazi attack on a YouTube video. And whose father is famous for the quote “It depends what the definition of ‘is’ is.”

Clinton’s attack on Conway was an obvious pot-meet-kettle case. Conway tweeted back, “Bosnia lie a Great reminder. And 2 @ChelseaClinton & others, you can’t “invent” quality candidates either. I misspoke; you lost the election.”

Losing the election may have been a bit of a non-sequitur, but it nonetheless put Chelsea in her place. One of the major reasons Hillary Clinton could not connect with the American voter was because she was known to be a pathological liar and a majority of Americans viewed her as dishonest. So, for Chelsea to go after Conway the way she did is just stupid.

The best service the media and the Left can do for themselves is gain some self-awareness. But they won’t. And that’s why they will continue to lose.