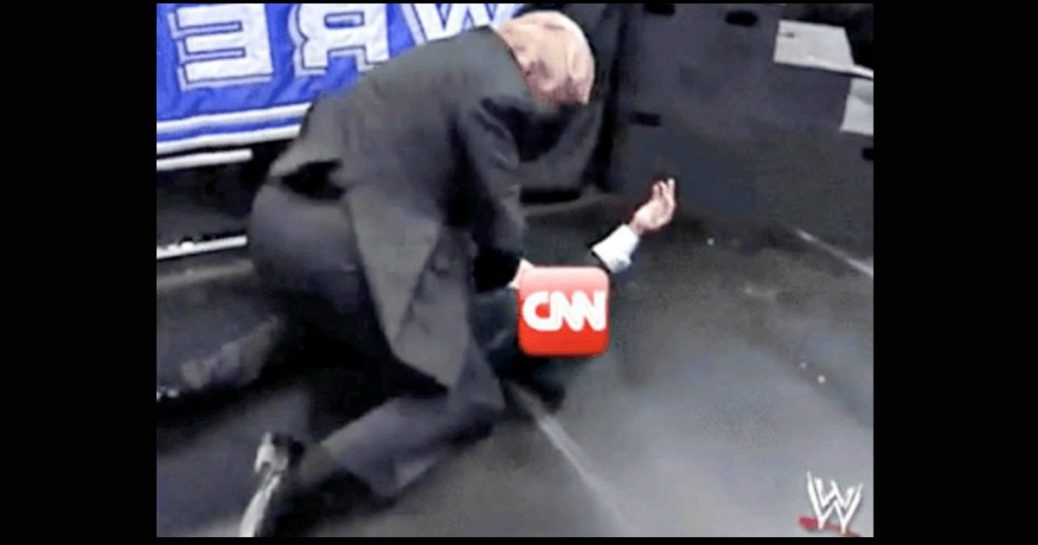 On July 2 President Trump tweeted a 29 second video showing himself taking down and beating up someone with the CNN logo for his head.  It is glorious.

(And that’s why I need Jesus’ forgiveness)

The Donald is not playing by their rules any more.  What is a corrupt broadcasting network to do?  It seems they have never before come up against a President who is a real person with a real sense of humor.

CNN has tried to turn the video to their advantage, but has only made things worse for themselves, much worse.

If CNN had simply, sanctimoniously declared that the video was “inciting violence” and was an “attack on the media” they could have got out of this clean.  But the Network has instead revealed an ugly, vindictive streak.  They wanted someone to pay for this, someone to be hurt in retaliation.

Having already done their lying worst to President Trump, to no avail, they hunted down the person who had made the source video for the President’s tweet.  And they found him.  Online name Han*Solo (the * is a deleted nasty word – of which we’ve had enough)

CNN then threatened to DOX Han*Solo (reveal his identity and personal information) if he didn’t apologize.  Given today’s Left, this was tantamount to a death threat. They got their apology.

The apology sounds like a politically correct recitation from a Moscow Show Trial (i.e. dictated).

My fellow redditors, First of all, I would like to apologize to the members of the reddit community for getting this site and this sub embroiled in a controversy that should never have happened. I would also like to apologize for the posts made that were racist, bigoted, and anti-semitic.

The apology goes on in an obsequiously repentant and pedantic vein, speaking as if CNN is an actual person who was somehow harmed, rather than corporate thing, until:

I have the highest respect for the journalist community and they put their lives on the line every day with the jobs that they do in reporting the news.

The apology ends with:

“The more you know yourself, the less judgmental you become” ― Aniekee Tochukwu Ezekiel

The poor kid!  He is reportedly 15 years old.  His online name had a  * in it.  His initial response to the video going viral was:  “I wake up and have my morning coffee and who retweets my s—post but the MAGA EMPORER himself!!! I am honored!!”

I find it extremely difficult to believe that the literate apology was written by the “I am honored!!” teen – who has a penchant for bad language, and doesn’t know how the spell “anti-Semitic” or “emperor” – of his own free will.  It sounds to me like it was dictated by CNN; or possibly by frightened parents. “Journalists put their lives on the line everyday…”!  (Only those investigating Clintons) The poor kid!

Whether the words are his own or not, CNN has forced this young man, probably fearing for his life, to issue an obsequious, abject, politically correct “confession” in the form of an “apology”.  God this sounds like something from 1984.  In their hearts these CNN people are totalitarian monsters.  The video is funny!

I suppose I could be wrong here, but the kid quotes Aniekee Tochukwu Ezekiel on his own initiative? I doubt it.  The truest thing that A T Ezekiel has said is “Not being you kills the you in you.”  I fear that this is what CNN has done to this young man.

That is clearly their intention.  They have publicly threatened to DOX him if he ever does anything like this again.  They want to crush him so that others will not have the effrontery to humiliate CNN in the future.

And in doing this they have gone too far. From FederalCharges.com:

Blackmail is a criminal offense in which a party, who has obtained information about a victim, demands or receives “money or any other valuable thing” as a consequence for not informing third parties about the information in question.

CNN is stupidly, openly, engaged in blackmail!  They have gone too far.

CNN needs to be prosecuted for blackmail, perhaps along with their parent corporation Time-Warner.