Apathy is Fatal to Freedom 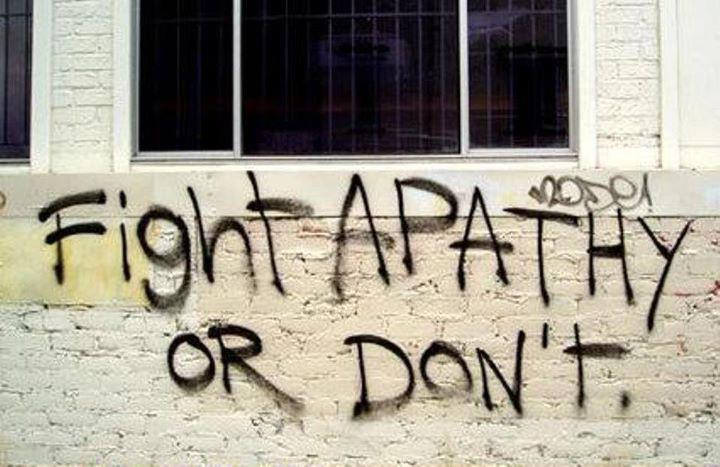 APATHY defined as: a lack of interest, enthusiasm, or concern, and is Mass Destruction’s deadliest weapon.

Applied to an entire nation, it is lethal! When we are apathetic, others are able to step in and take over, making decisions for us that affect our daily lives. These others are of both sexes, political parties, all races, & all religions.  No one has a monopoly.  The desire to rule others is an equal opportunity activity.  Gaining influence over us without our consent (and sometimes even without our knowledge), is easier for them when we don’t care.  These full-time controllers need to be reminded that their primary purpose is NOT to run us, but to protect our freedoms.  They continue to make progress by coercing ‘We the People’ to be prisoners of our own fears.  The presentation of every item in the news is designed to appeal to our need for safety, security, belonging, esteem, etc.  We must stay alert.

I fear we haven’t been paying enough attention! It’s way past time to pull in the reins.

Albert Einstein believed: “The world will not be destroyed by those who do evil, but by those who watch them without doing anything.” And Aristotle said: “Tolerance and Apathy are the last virtues of a dying society.”

I don’t know about you, but I’ve tolerated enough. There is a quote about having to repeat the past if we have not learned from it.  A greater concern of mine is that if we don’t change the future, we will be forced to endure it.  I haven’t worked all my life, raised my family ‘in the way it should go”, and finally entered the retirement community to watch the continued demolition of what God enabled our Founders to create for us.  I want to leave my children more than what America is today – and what it is quickly on the road to becoming.  Can you say Socialism?

When I realized that this is exactly where we are headed if nothing is done, I decided to try and tell others what I have learned. Freedom and self-preservation must prevail.

I learned that we all need to stand up to a system that does not care about us – despite the rhetoric that we hear. Of course they make claims that they want to ‘take care of us’, but only with their rules & regulations.  They will do this whether we consent or not.  Politicians have become immune to their constituents.  The majority of them tell us what we want to hear; get elected, and then proceed to ignore us.  They only listen and act on what they believe will benefit them the most.  The greater their power is, the greater the abuse.  We cannot afford to remain apathetic.

The Media compounds the problem. News Reports are created (fabricated, if you will!) using the reporter’s own style, and for a particular purpose – to shape public opinion. Ethical Journalism requires reporting facts – Who, What, When, Where, and Why.  Instead our fears and anxiety are used to promote various agendas.  We then become media’s prisoners.  Their stories are intentionally crafted with bias to keep us on a leash.  Statistics can be used subjectively. It’s how they get us to do their bidding.  It’s how they secure the ring in our nose.  OK– so you still don’t care.

Media also runs interference for those in the spotlight. This is how Hillary’s various escapades can be ignored, denied, or merely presented favorably during her take-over attempt.  Maintaining the influence they have over the masses is imperative.  That’s us y’all!  Remember “Give me your tired, your poor, your huddled masses yearning to breathe free.”

We haven’t been paying attention.  Or we all have had our heads buried in the sand?  The press never fails to interpret for us even when we choose to think for ourselves.  Their verbage molds our perception of the world. It is made into what they want us to see.  No wonder apathy abounds!   There’s a lot out there to deal with and most of it is negative. It’s easier to filter it all out.  Well, let’s not filter out our freedom, folks.

Personally, I try to look past the smoke & mirrors.  The Republicans displayed their forced unity, showing that they were indeed becoming the party of exclusion.  Their show of force hints of more oppression to come.  But they now stand behind a candidate that fights for us.  Democrats take every available opportunity to push their agenda.  Take Gun Control, for example.  Every shooting, every riot, every type of unrest & disturbance creates another opening for them to sell Hillary’s bill of goods.  It also helps create an opportunity to advocate harsher methods of punishment for the perpetrators. I sometimes wonder if the episodes are planned and timed for maximum benefit. Unfortunately there have recently been are far too many opportunities allowing her to sway public opinion.

Donald’s press coverage seems slanted the other way. Negative press seems to follow him around.  Personally, I see Donald as a person who CAN (and already has, to some extent) changed the way things are.  He is quoted as saying that he made decisions based on Common Sense and his Business Ability.  He has awakened many that have formerly been stifled by apathy.   Remember – it’s the people, not the politicians that define a political party.  Donald has weathered numerous attacks – both on himself & on his family.  He is one of the walking wounded in this battle for the top spot– yet he continues to fight.  Perhaps he is the true Patriot.  HE HAS NOT PLACED POLITICS OVER PRINCIPLES.  Hooray! Are you now beginning to care?

The RNC hijacked Trump’s unprecedented popularity to further control the masses. And after Donald accepted the nomination, they went into high-gear in their fund-raising efforts.  Their story is that they need the funds “to defeat Hillary”.  I suspect they have uses for the funds that they will not admit.  It was called Payola in the 60’s.  Record companies paid radio stations & disc jockeys to promote their performer. It was illegal then – and is illegal now!  Today the term has come to refer to any secret payment made to cast a product or person in a favorable light; a bribe in commerce and in law to say or do a certain thing against the rules of law.

The DNC convention also had its share of scandal. It was ‘leaked’ through a number of E-Mails that Bernie was paid off to support Hillary.  Then delegates were told that they needed to present a unified party.  Sound familiar?  It worked.  The ‘fix’ was in.  What about all the Bernie Supporters?  I’m sure they felt betrayed.  Just like the Democratic sit-in in The House.  Just like the Republican “free the delegates” group.  Just like me.  How about you?

Votes are done for our entertainment, and to keep up the façade that we are indeed giving our consent. They perpetuate a false sense that we still have a choice. Protests are ignored, so where do you see the will of the people? It’s in the trash! Today’s Progressives are using social activism and political reform to take over our country.  This is not limited to one party. Our “elected officials” continue to ignore us, and the media continues to perpetuate the myth that our voice counts. Our government is in a constant stalemate! We sit idle, and allow them to pretend that they are operating with our consent, and they have been dead-locked for quite a while. Don’t you care about that?

These arrogant leaders have had a free ride long enough. Their benefits have been acquired at our expense.  It’s time to break the hold they have on us.  The 10th Amendment is for the people.  Let’s use it.  We can have a Convention of the States.  It’s time for us to replace apathy with action. Stay awake and aware.