Another Coincidence, You Say? 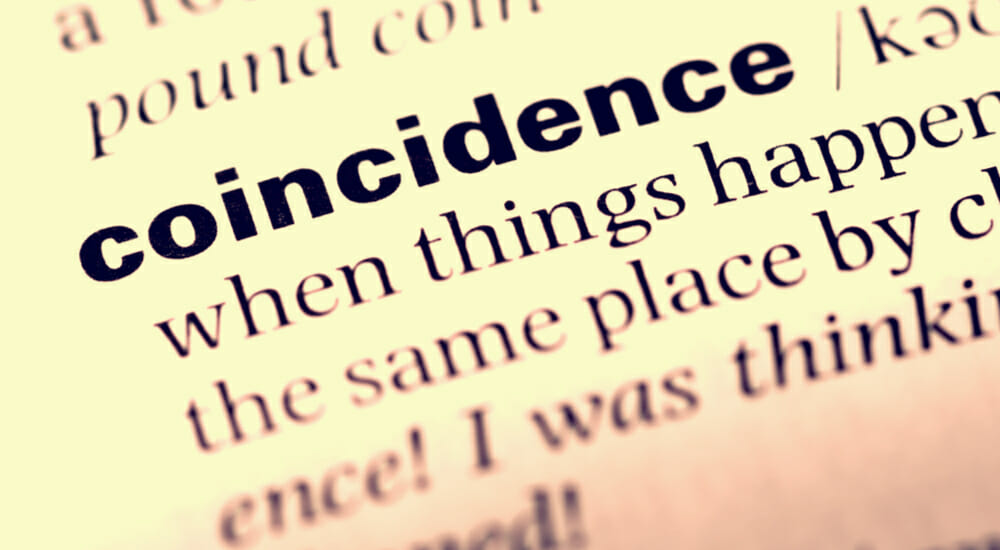 What’s say we take a break.

Although we end the year with a vibrant growing economy and tax relief legislation, 2017 has been a time of great change, division, political warfare and foreign instability. Amidst all the controversy, we have witnessed the attempted assassination of a congressman, and the President of the United States assassinated as a comedic gesture and each night over and over in a Shakespearean play, and all this with a terrorist attack in lower Manhattan, the constant undercurrent of Russian collusion, impeachment, an unstable North Korea with what some believe having achieved the capacity of reaching the U.S. with a weapon of mass destruction.

I believe we Americans could do with a little diversion, it’s well deserved. So let’s start the New Year off with something light and easy on the mind. From time to time as you by now are aware, I think it’s a good idea to take a break, a respite if you will, from all the politics and drudgery, the what seems never ending onslaught of the vicissitudes of life and all the world’s problems, to reflect on other matters that might at first seem trivial, but can act as a buffer from all the drudgery.

In a past article I told a story about what some might have called a coincidence, some might have even thought I made it all up, but it was all true and as far as I was concerned it went beyond a coincidence and was in fact fate. The story spoke about how I purchased a certain electronic product, and on that same fateful day several hours later found on the street, amongst rubble, the exact amount almost to the penny that I paid for the product. I mentioned about all the extraneous influences that were part of that day and how each of them, in one way or another played a part in guiding me along the path I travelled.

Recently I was confronted by a similar situation that many of us, who claim ownership of some of life’s amenities, a home, car, boat, etc., may encounter. Inclement weather and other of nature’s forces and processes that she inflicts and tests us with had caused some minor damage at home. I will leave out any specifics; they are not that important and will not in any way affect the story.

It was a bright sunny Saturday morning, and I set out to purchase the product I required to repair the damage, in addition to other items. I decided to travel along a certain route, but was soon unexpectedly interrupted and sidetracked by emergency service vehicles that were responding to a fire; it was a false alarm. I was forced to turn onto another street that although ran parallel to the street I was first on, put me further west of where I needed to be. As I proceeded, at some point I decided to travel east again and get back on the original street I was forced to divert from. Are you still with me, why don’t we stop here for a minute and catch our breath.

The cross street that I decided to take to get back to the original just so happened to be part of the towns infrastructure improvement program; the roadway was being repaved. I turned around and headed back west.  The street I now travelled on was made up exclusively of residential homes; it was quiet and deserted at about 8:30 in the morning. At about half a mile, since I turned off onto this new route, I spotted to the right of the center of the roadway a brown cardboard box, approximately two feet square and about a foot thick.

Whenever I spot something that seems out of place, and in this case might pose a danger, I will usually remove the threat or whatever it is to a safe location. I approached the box and noticed one of its flaps half open. I took hold, but then realized the contents must still be inside because it was heavy. I dragged it over to the side and opened the box. I looked for any labeling first that might identify the owner, but there was none.

I guess by now you know what was inside, suffice it to say there was a quantity of the item I needed for repair. As I wrote in that last column that dealt with a similar situation, there were just too many factors that played a part in this find to call it a coincidence. Now you can believe it or not, but I can assure you it did in fact happen, and I have enough of the item to last for awhile. Also, who knows what the future and fate have in store.