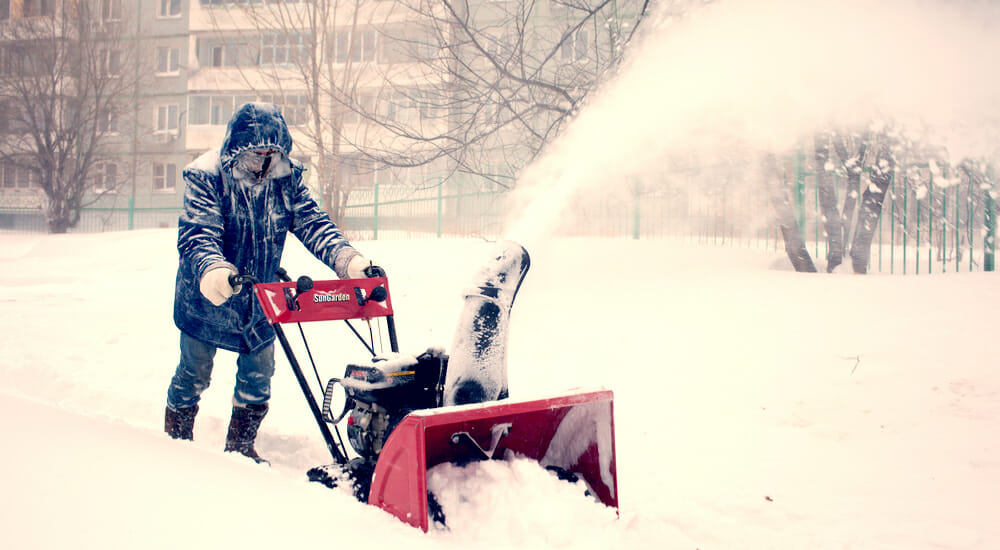 I’ve always believed it necessary to laugh through one’s life no matter how insane it becomes. This has to do with winter in New England.

There I stood looking up at a white mountain of snow that seemed to reach the sky. The snow was packed tight with pale blue facets in the crevices and the wind whipped a fine spray from the summit like Everest.

I was absolutely awestruck by its size and beauty and I wished like hell it wasn’t in the middle of my driveway.

The day after our first major snowstorm began with me trying to open my garage door. It took about half an hour, in sub zero temperatures, of me chipping away at the ice between the bottom of the door and the pavement that had sealed it shut like cement. When the door finally opened to reveal the spectacular winter vista before me my first thought was how beautiful it all was. It was like that scene in The Wizard of Oz where Dorothy’s world turns from black and white to color – except in reverse. The world had been transformed into a glittering white wonderland.

After a few minutes standing there admiring the view of nature in all its splendor I decided I better start my snow blower. Like my garage doors it wouldn’t budge. It was frozen solid to the garage floor. It took me a good 10 minutes heaving it this way and that, like a team of sled dogs trying to break the runners loose, before I was able to budge it and drag it over to the open doorway.

Then it wouldn’t start.

When you’re shoveling the snow a snow blower seems like a great idea until you spend $1,800 on one and discover the dirty little secret about snow blowers – that you expend about the same amount of energy getting them to start as you would shoveling 20 feet of driveway.

Another 10 minutes passed with me yanking on the cord trying to get it to start. I began with a few earnest prayers and sweet encouragement to the machine and descended rapidly into abuse and threats. I wondered if the pain in my shoulder was the first warning of a heart attack or if my arm was just getting tired.

Yanking on the cord for the 12th time the machine spoke to me. I think it was: ‘What are you trying to do – make scrap iron out of me?’

I told it that its mother was an Edsel and its father a Pinto and that worked because it coughed loudly into action.

I was so excited I shoved it out into the snowy wilderness and began throwing a huge white plume of snow over my head.

Unfortunately I had forgotten to point the chute in the right direction and the torrent of snow poured deep into my garage. I swear the snow blower engine had a chuckle in it.

I grabbed the chute to point it in another direction and it swung around and blasted a jet of freezing snow right into my face, filling my eyes, nose and throat and pouring down my neck and inside my clothes. I opened my mouth to scream and took a couple of pounds of snow into both lungs before snapping my mouth shut – and then my whole face went numb.

This had to be it, I thought, the heart attack I thought I had sidestepped when I put my snow shovel away.

I smacked the chute away from me and wiped the hard packed snow out of my face. It actually took a couple of seconds to pry my eyelids apart and when I forced air through my nose two little white plugs flew out into the snow bank.

At last the machine seemed to have got its revenge and began going in the direction I wanted, clearing a nice, neat white pathway through the three feet of snow in my driveway towards the main road. And I have to say, when it was up and running and doing its thing, it did a good job. Until it reached the barricade at the end of my driveway that the Town snowplow had left for me.

The snowplow had shoved about 50 feet of accumulated snow on my half of the road into the entrance of my driveway creating a wall about five feet high and 20 feet thick. The machine took one bite at it and stalled.

It took me another 10 minutes to coax it into starting again and I think I heard it sob when I pushed it back into Mount Fabiano.

Back and forth I pushed it, nursing it and coaxing it, a few inches at a time, firing a high arc of snow over my head and moving forward about an inch at a time. As I inched forward the wind picked up and began blowing snow back into the path I had cleared until I disappeared in the middle of a blizzard that deposited more snow behind me and on top of me than I was able to clear.

But now it was a challenge. The Fabiano blood was up. I wanted to clear a thoroughfare through that sucker then climb it and stick a flag on top and proclaim my triumph to the world. I had weathered too many New England winters to be defeated by this one.

At last I broke through and gave the kind of manly cheer that makes women shake their heads at how little it takes to make us happy and turned back up my driveway to begin widening my breakthrough.

Then, I heard a distant rumble and didn’t know what to make of it. I paused and the rumble grew to a crescendo, then it turned the corner and I saw the amber flashing light of the Town plow as it began another sweep up my road.

It barreled up my road with unstoppable force, throwing a tsunami of snow in front of it and all I could do was stand there and stare in horror as it bore down on me.

The beast roared past and in a microsecond myself and my snow blower were completely engulfed in a tidal wave of snow. And I don’t mean temporarily. I mean we were buried, the both of us.

I spat snow from my mouth, waved my arms and yelled “avalaaaanche” at the top of my lungs and as the snow plow roared away I know I heard its driver give a wild maniacal laugh.

I began digging upwards in my silent, snowy tomb and after a few minutes broke through into daylight. I then clawed my way, one hand at a time, out of the newly formed snow bank, trudged back up to my garage and retrieved the snow shovel to dig out my snow blower.

After about half an hour I had it clear and pulled it out into the street so I could begin cleaning snow out of all its vital organs, promising it all the time that I would never insult it again, change its oil regularly and only fill it with premium gasoline from now on.

It took me a good two hours to clear enough snow from my driveway to get just one of our cars out of the garage.

Under the thick coating of snow that clung to my outer clothing from head to toe I was drenched in sweat. I felt like a worm in a cocoon hoping to once again develop into a human being. At one point my wife opened the door from the house into the garage, looked at me, laughed and then closed the door again.

But, I had finally freed my family and myself from one of the first big storms of winter.

I cleaned my snow blower, changed its oil, Simonized it and put it under the garage stairs. It’s still early in this winter season and I know I am going to be pulling it out of its home many more times before I see the first daffodils of spring. I then had a thought I had not had since I was a kid. I hadn’t seen this much snow in years. Why not jump off one of the high mountains that now surrounded my driveway, fall on my back and make a snow angel? Why not indeed? I deserved the fun.

And I did just that. I went back out into the snow, climbed the highest snow pile and jumped off, not caring that I was making a complete fool of myself in front of the neighbors. They were used to it.

I rolled down the biggest snow pile onto my back and lay there, sweeping my arms in the deep snow, making a snow angel. I closed my eyes and let the bright sun melt the crumbs of snow in my beard. It felt good to be a kid again.

Then I heard a soft fluttering sound, a shadow passed across my closed eyes and something warm settled on my face. I jumped up and a seagull squawked and flew off in a cloud of white – and once again I swear I heard the sound of laughter.