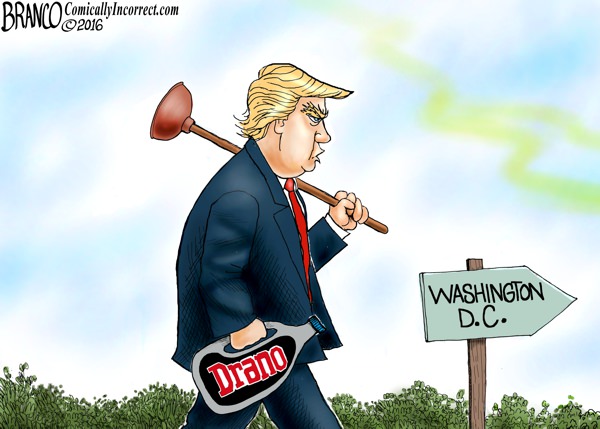 From A.F. Branco at Comically Incorrect

If you watch left wing TV, which is now high comedy for conservatives as Democrats and their press try to blame him for all the Trump protesters, calamities all the way to prickly heat.

You will hear extensive, and breathless speculation over what Mr. Trump will do. Let us first document who he is:

Donald Trump is the first three-time married President and while our grandmothers would have difficulty with that today we are much more likely to see it as proof he is an optimist.

Mr. Trump is the first 70-year old man elected to the Presidency and we believe it is simply a consequence of our national lengthening life span, which is now over 80, and clean living, so he could well serve two terms.

Donald Trump is the first candidate to fund his own Presidential campaign and that record may last a long time unless he is so successful America will be looking for yet another man with such a record.  While not discussed in the media, that we can recall, it is a point that was likely on many minds given the state of corruption we see in Washington, DC.

President-elect Trump is the first reality television star elected to office and given the power of the media, not the last. Ronald Reagan was first a radio sports announcer, commentator and feature film actor, President of the Screen Actors Guild for 20 years,  GE TV spokesman media person to become President, but he had been a successful Governor of California

Donald Trump is the first person elected to the Presidency without a political or a military background and this is a first even though Ronald Reagan’s military service was in a US continent based film company doing military training films, an important, but non-combat position.  Training films were very powerful training aids and great contributions to the war effort.  Reagan did have “Basic Training” so he was familiar with the problems and his films were considered very effective.

Donald Trump is the first billionaire elected to the office. His true net worth is unknown, but it is almost certainly several billion Dollars. Getting an accurate accounting of the net worth of a man with as complicated a financial picture as Mr. Trump’s is not an easy task. However, it can be said that money never has been a problem in his personal life so he is very unlikely to be driven by avarice of the kind seen with the Clintons.

In his appearances with Mr. Obama and on “60 Minutes” Mr. Trump seemed more subdued and serious than usual.  The weight of the job is coming to him. He shows it and we think he will do very well.

What He Will Be?

We are a little surprised Mr. Trump does not speak in terms of working with Congress as he can really generate very little without them, but Executive Orders which seem anathematic to him as he has roundly criticized Mr. Obama for overusing them.  Mr. Trump has said he would rescind all of Obama’s Executive Orders and if true that alone will cause great changes in many bureaus.

What has escaped, or been ignored, by the mainstream press is that Mr. Trump has experienced, and apparently perfected, the executive function far better than any man who has been President.  When he sits at the head of the table he knows he is not the most learned man there in every field represented or the smartest man in the room. He is the one who has to pick the right person in terms of sincerity and capacity for the job.  Mr. Obama’s failure was that he thought he was the smartest man in the room and made many mistakes thereby.

We see the major task before Donald Trump is that of overcoming a generation of people that have been indoctrinated in a world where advertisers no longer pitch “…what you want and need,” but “what you deserve.”  In other words, the “Me!” or “Victim” generation with “private space” looking to be offended.  We have only been waiting for an eastern, perhaps Ivy League, college to offer a Ph.D. program in “Victim’s Studies.”