America will Never be a Socialist Country! 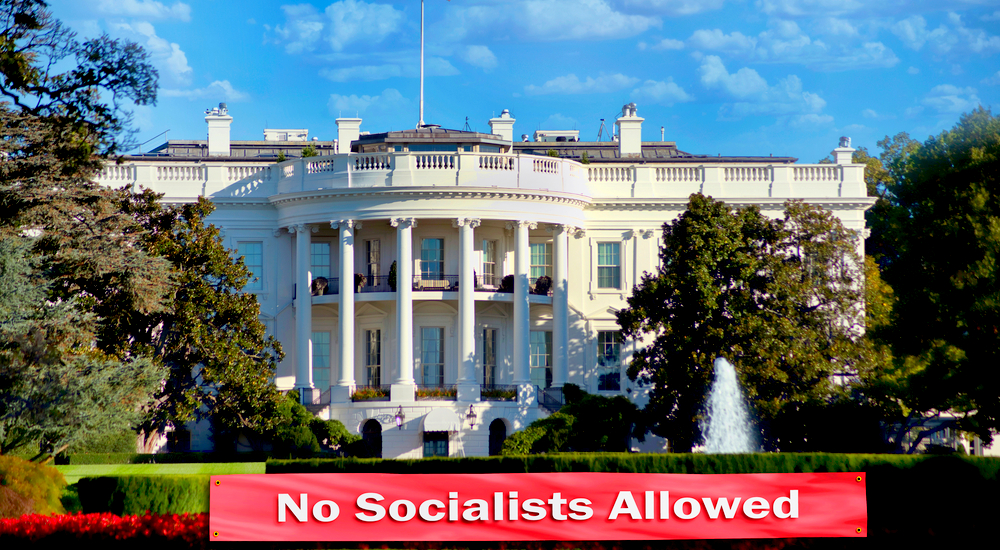 It’s shocking that the President of the United States would feel the need to calm the fears of its citizens with those powerful words. But on the other hand, it was not surprising, since so many Democrat leaders have declared their allegiance to the godless political/economic system. Dozens more have shown sympathy and given support to Socialism, without openly declaring themselves to be Socialists.

I took pages of notes as I watched the State of the Union (SOTU). I had planned to go through it in detail, as I have done in the past. I decided not to do that this year, but rather to highlight the key points and give you some important takeaways.

Probably the most important fact about the SOTU emerged after it was over. A shocking poll revealed that 74% of Americans who watched the speech approved of it. Not surprisingly there were more Republicans and Independents watching than Democrats. The big surprise was that of the Democrats who actually had the courage to watch their arch enemy, over 30% approved of what he had to say. And 82% of Independents (the group that determines the outcome of every election) approved. Barring some major catastrophe in between now and the 2020 election, this makes Trump’s reelection a certainty.

You might expect that a poll with such positive results for Trump would have been taken by FOX News. To the contrary, this poll was taken by the notoriously Liberal CBS national TV network. It was a “snap” poll, taken immediately after the SOTU so that the Democrat Party bosses didn’t have time to tell the people what they were supposed to think. And this poll was not an outlier. Polls done by other traditionally Liberal networks produced similar results.

71% of watchers believed there is a crisis at our border with Mexico, and 72% believed the president’s ideas on how to handle it was correct. This means that a large percentage of Democrats hold these views. It is the Democrat elites who hate the idea of a wall and immigration reform – not the citizens who have to live with the consequences. These party leaders all supported Trump’s ideas back in 2006 when they proposed them. But since Trump supports them today, their unreasoning hatred for him compels them to oppose their own ideas.

Overall, the SOTU was simple, yet compelling. The president was very – well, presidential. He didn’t use his famous nicknames for the people who attack him. He didn’t turn around and confront Pelosi in her own house about her blocking the reopening of the government, even though many of her own party members had expressed a willingness to deal on the Wall. (Honestly, I don’t know if I would have been that gracious.)
He didn’t make the SOTU a long laundry list of his accomplishments. He has made huge strides with our economy. In fact, he has improved the economy more in two years than previous presidents have in eight. He mentioned these things, as he should. But he didn’t make the address all about himself.

Instead, he spoke about the future and about uniting the nation for the common good. Of course, many presidents have talked about unity, but you could see he really meant it. He also honored our military men and women.

One of the first things he did was to honor three veterans of World War II that he had invited. Toward the end, he introduced a Jewish man who almost perished at Dachau. He told about how the U.S. arrived in time to save him and many others from the gas chambers. Then he revealed that one of the U.S. veterans, who was seated next to the Jewish man, was one of the soldiers who liberated the concentration camp. It was very moving.

He did take one dig at the Democrats, although in a polite way. He said that “If there is going to be peace and legislation, there cannot be war and investigation.”This was in response to the Democrats’ threats to impeach him (although they never say about what) and to constantly “investigate” him to make it impossible for him to govern. House Democrats have even threatened to use their new power to investigate the president’s family, and to investigate him for business dealings far in the past that have nothing to do with his presidency.

He was bolder than any president has ever been in his defense of the lives of unborn children.

“Lawmakers in New York cheered with delight upon the passage of legislation that would allow a baby to be ripped from the mother’s womb moments before birth. These are living, feeling, beautiful babies who will never get the chance to share their love and dreams with the world. And then, we had the case of the Governor of Virginia where he basically stated he would execute a baby after birth.

“To defend the dignity of every person, I am asking the Congress to pass legislation to prohibit the late-term abortion of children who can feel pain in the mother’s womb.

“Let us work together to build a culture that cherishes innocent life. And let us reaffirm a fundamental truth: all children — born and unborn — are made in the holy image of God.”

Finally, there was the very strange – almost schizophrenic – behavior of Nancy Pelosi as she sat behind the president. When he announced that the U.S. had officially recognized the legitimate government of Venezuela over the murderous Socialist dictator, she refused to stand – even though most of the Democrats in the House did.

She was obviously trying very hard to keep the ugly grimaces off her face that are so natural to her when she disagrees with something. But she was unable to do so when the president mentioned the two-year long partisan investigation that has produced zero evidence of any involvement of the trump team with any Russian. She looked like she was about to jump over her desk and attack him.

Following that she alternatively shook her head “no”, rolled her eyes, pointed to other Democrats and even talked to herself. I believe she had intended to act like an adult since the eyes if the world would be upon her. But she just couldn’t control herself. She indulged herself in a mocking handclap (she looked rather like a seal) while locking eyes with the president when he spoke about the “politics of revenge). In the video below you can see the clap that went viral, as well as her daughter’s acknowledgment that Pelosi has used the same mocking clap as an insult to her daughter in her teen years.

She finally decided to ignore him. He had handed her and Vice President Pence blue folders containing the text of his speech on what looked like heavy card stock. She spent most of the SOTU shuffling through them – not following his speech on the cards, but obsessively going through them again and again. She even did this during the few times when she was forced to stand. Several times after everyone else sat, she continued to shuffle the cards, and then seemed to realize she needed to sit down. I don’t know whether she was so involved with the card tricks that she forgot to sit, or whether it was a deliberate attempt to draw attention to herself. Whatever the reason, it was extremely bizarre behavior. Her visceral hatred of the president was evident throughout the entire hour and twenty-minute speech.

Her hatred may well result in another government shutdown. Although the president extended several olive branches to her and the Democrats during the SOTU she maintains that there will be zero money for a wall. Many Democrat leaders and some of the conference committee members have said publicly that they see room in the conference negotiations for some money for the wall. Her second-in-command has even defied her by saying that there is nothing immoral about a wall. Yet she still refuses to allow any Democrat to vote in favor of a wall.

You may ask how she can enforce this. Nancy Pelosi has always been very vindictive, and she has only gotten worse as she has aged. She has the power to remove Democrats from important career-making committees with no oversight. She has threatened Democrats that dare to defy her with financing the campaigns of opponents – even though some of them are long-term members of Congress. Since she can reward or punish members with committee assignments, and since she controls hundreds of millions of campaign dollars, she is not someone Democrats dare to cross.

Even though I’m sure he could feel the waves of hatred emanating from the creature behind him, Trump did an excellent job of staying on track and delivering a great speech. He even managed to get Democrats to stand, cheer and dance around by mentioning the fact the fact that so many women had been elected to the house. I would have never thought that possible. Especially when Alexandria Ocasio-Cortez, who had sported an ugly frown on her beautiful face throughout most of the speech, joined in the cheering and dancing. Prior to that, I had wondered whether, like many other Democrats, her bottom had been super-glued to her seat.

CBS: Most Viewers Approved of President’s Second State of the Union Address
https://www.cbsnews.com/news/state-of-the-union-2019-most-viewers-approved-of-trumps-sotu-address-cbs-news-poll/