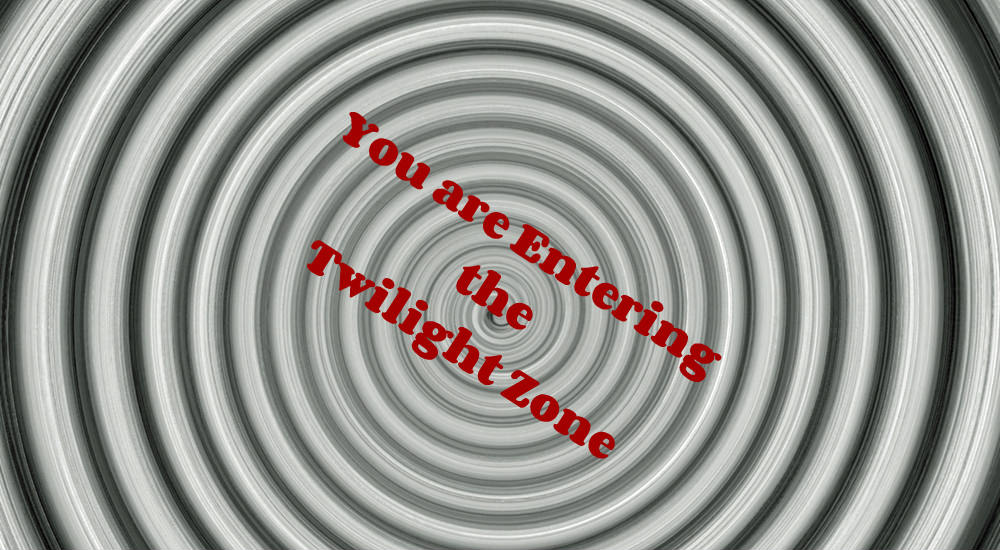 We are venturing for the fifteenth time into what I have come to call the ‘9/11 memorial amnesia syndrome’ time zone. Not quite the same as venturing into the ‘Twilight Zone,’ but with apologies to the late, great Rod Serling I think the case I describe might qualify for an episode of the classic TV series.

The episode begins in a scene showing the devastation of the attack the day after on a news program. As the camera pans away from the TV screen we see a large office room of 10 people fixed upon the screen. The markings and furnishings identify the room as the office of the U.S. Secretary of Defense and his advisers. The camera zooms in on one particular young man whose face is fiercely intent and seemed to focus anger toward the images he witnessed. The voice of the Secretary brings the room back to his attention and the young man turns with renewed intent to his new boss. “There it is people. We’ve seen it over and over again and this day after we are charged with the ongoing and future defense of our freedom. We must make sure we know our enemy and how to defend against him. We know his name and organization, Al Qaeda. We do not yet know what our response is to be officially. The President will give the final word. But we do know their reasons for the attacks. They have stated them clearly. I believe our response must be to hunt these radical Islamic terrorists down like the barbarians they are and exterminate them wherever in the world they hide! That is all! Let’s get to work to save our country!” Our young protagonist joins the other nine shouting “Yes Sir!” and the camera watches him eagerly step out of the Secretary’s office door. The camera pans to the host in his dark suit holding a very un-PC cigarette in his hand. “Our eager young patriot is setting out to fulfill a lifelong passion in service of his nation…that is until he stumbles through a door into…the Twilight Zone,” he says in an understated baritone. After commercial break we would return to the young man stepping through the door into some kind of time portal into our time, the date 9/12/2016, fifteen years later. To make a long episode short he is horrified by what he sees in the government and the culture and how in so many ways he sees the future as even blinder than the past! Our hero wonders if the entire country has gone through some kind of mass amnesia and totally forgotten what happened on 9/11 and who the enemy is! He finds a possible, but dangerous, way back to his own time through the portal and he trys it at great risk to himself…and succeeds! Whereupon the host ends with a narration “The question of confronting evil usually gives us only one chance in life to answer it. This young patriot has been given a second shot at the answer for the sake of the future. Courtesy of..The Twilight Zone”…

OK maybe it wouldn’t have been a good enough episode for TV if I wrote it. But I hope you get the point. Think of it as a “what if” question. What if you could actually go back to 9/12/2001 and be in some kind of a position in government to make things different from that very day? What would you do if anything? I would do at least three things. First, I would make it clear that we were going to believe what the terrorists said was their primary motivation, the tenets of Islam! We don’t have to agree with this reasoning ourselves! We only have to agree that THEY believe it is true and thus to them it is A WAR whether we think it is or not! So we must act as we would if in A WAR with an enemy! Which means we must name the enemy from that very day as Islamic in belief! It does not mean all Muslims are the enemy, just that the primary enemy in this war all happen to be Muslims! It boils down to the fact that not all Muslims are Islamic terrorists, but all Islamic terrorists are Muslim! We got this wrong from the very beginning by not directly linking Islam with the terrorists. Second I would convince the President to ask Congress for a formal Declaration of War against Islamic Terrorists to make it clear that the U.S. will proceed on our own if necessary to conduct this war. We would welcome any friendly alliance of nations in this effort, but it is OUR WAR and we will lead any “coalition” with or without the approval of the UN! Finally, I would enlist the aid of as many Christian churches as possible to pray and seek the LORD for our fight. Historically, whenever we have fought a real war, we as a nation have officially called upon the LORD for favor in the conflict. The reason for this practice was perhaps best stated by Abraham Lincoln. “Sir, my concern is not whether God is on our side; my greatest concern is to be on God’s side, for God is always right.” I agree with our late President that the absolute key is to be sure that we are truly on God’s side in any conflict. The passing of time has only served to highlight how much more we need to be on God’s side today! There are many other things I might wish to change in those early days after 9/11, but these three stand out to me as missed opportunities to have inherited a much safer nation and world at the present time.

Of course, none can return to the past and correct mistakes. But we can learn of our mistakes and from them, and apply that knowledge to our predicament today! We can begin by petitioning the heavens for strength and wisdom from our LORD as we contemplate the upcoming elections and beyond in our nation! I hope you will join me and many others in such regular prayer as we approach election day.