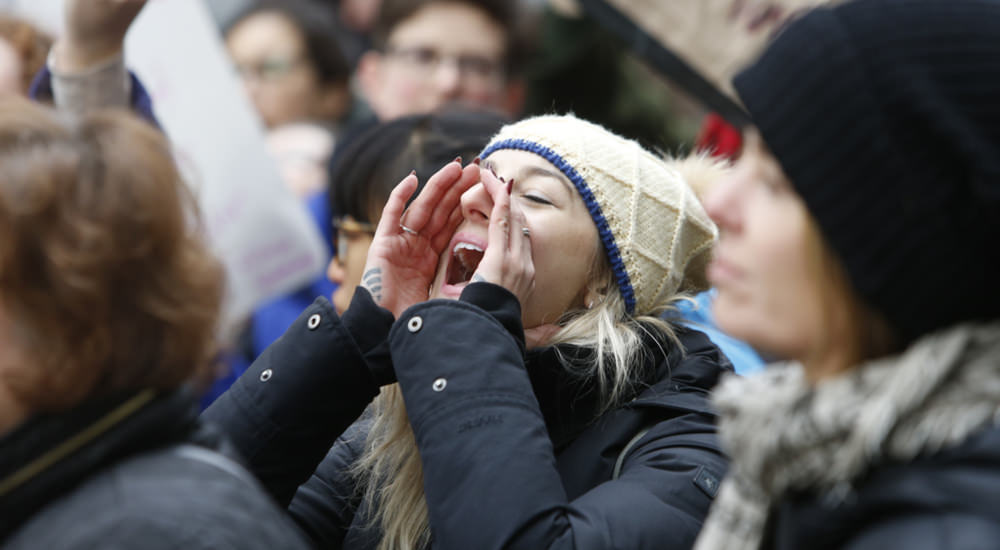 Marked by vulgar signs and filthy language from it speakers, the women’s march in Washington, DC today seemed to have a major identity crisis. Reporters asked hundreds of people what they were protesting, and received as many answers. The main theme, if there was one, seemed to be that they didn’t like our new president.

Apparently, they want to “Dump Trump”. These are obviously very ignorant people, since they didn’t seem to realize that there is no way to accomplish that goal. It appears that they think that if they protest and shout loudly enough, Trump would be removed from office. A basic study of the Constitution would inform them that he can only be removed from office through impeachment for “high crimes and misdemeanors.” He has only been in office one day. He hasn’t had time to commit an impeachable offense.

But these foolish women, who obviously have way too much time on their hands, have the mindset, “My mind is made up. Don’t confuse me with facts.” Just look at the speakers they chose. The ignorant buffoon Michael Moore was his usual incoherent self, rambling on about – something. (Why was he speaking at a women’s event? Is he a woman now? Or does he just “feel” like a woman? I can’t keep track.)

Gloria Steinem and Madonna both showed up trying desperately to become relevant again. Madonna said, “I’ve thought a lot about blowing up the White House.” That should get her some attention. Since it’s a federal felony to threaten the life of the president, she may get some unwanted attention – in the form of US Secret Service agents knocking on her door.

As I mentioned, there was much confusion about why they were there. Among the “women’s rights” that the speakers screamed about were homosexual rights, “climate change”, democracy, solidarity with Palestinian terrorists, Black Lives Matter, and the Wall. None of these seem to be particularly “women’s issues.” One sign read, “Angry Women Vote.” And a middle-aged woman carried a sign that simply read, “I am very upset.” At least she acknowledged that she didn’t know why she was there.

Of course, there were the usual demands that a woman’s right to kill her unborn child should have no limits. There were many signs demanding “Women’s Rights”. That was a little confusing since women, on the whole, have more rights than men. Just look at divorce courts. Women are almost always awarded custody of children, even when the father is a demonstrably better parent. And all a woman has to do to ruin a man’s career is to make an unfounded accusation of sexual harassment. “The harassment” can be something as simple as a stupid off-color joke that she claims creates a “hostile work environment.” Men don’t have that power. And more and more women are being chosen for jobs over better-qualified men, just because they are women.

Naturally, Hillary Tweeted to the marchers, “Thanks for standing, speaking & marching for our values.” She didn’t say what those values were, probably because she was as confused about why they were marching as I am – and as they were.