Whatever happened to ‘Small Talk’ and a Pleasant Evening? 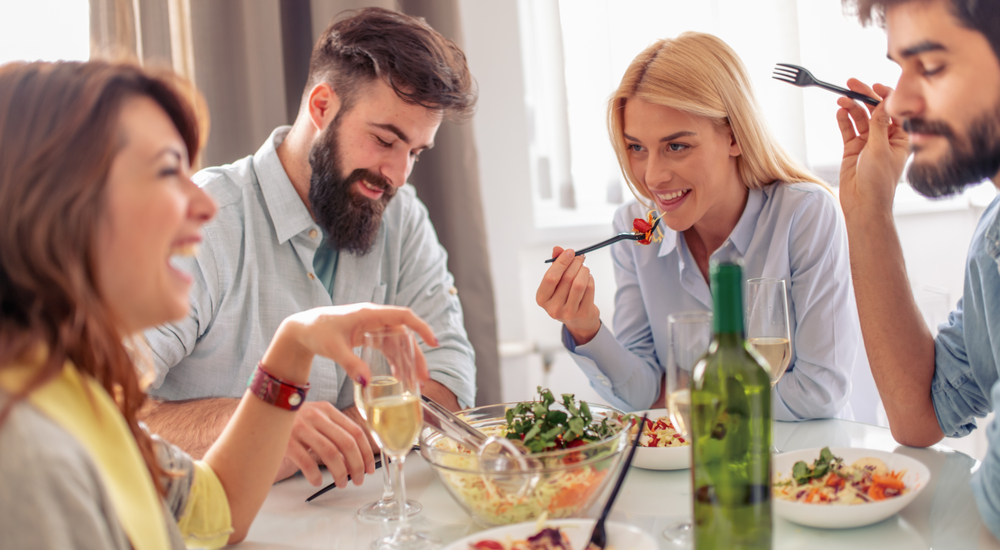 Recently I invited several acquaintances who I had not seen or spoken to for some time, actually since the presidential election, to join me for dinner. Although my intent was to have a pleasant evening and to catch up on matters of family and business, I must admit deep down I knew there was a possibility that there could be fireworks, and to be honest I looked forward to the occasion to engage in some good conversation and critical thinking, so to speak.

Yes, this was at the back of my mind; because as it happened, each of these good people’s ideological temperament could be described as left of center. And so if the conversation drifted into the realm of politics and social mores, which was not my intent, it would allow me the opportunity to gauge the pulse first hand of people I know who might think differently, and whose opinions are antithetical to what I believe. What can I say; I’m a glutton for punishment.

The evening began with the usual amenities, the smiles, and respectful greetings. We all shook hands, a peck on the cheek, and sat down to a hearty meal at a fine restaurant. There were five of us, a married couple, and two singles male and female, and myself. I began the conversation, as always, respectfully and politely with inquiries into each of their families and how everybody was doing, and hoping all were doing well.

As the conversation continued, it didn’t take long for the polite exchanges to take a turn to other topics. After about an hour, the main course was being served, Tom (the husband) looked at me, and knowing my right of center position on issues, asked, “So Bob how is Trump doing”. And so began the main course, discourse, and no other recourse. I boldly asked do you mean President Trump. Mandy his wife intervened and said, “He’s not our president”. I asked aside from myself, do you speak for everybody at the table; she glanced around and said “yes”. There was a momentary silence; I noticed certain uneasiness and shifting in the chairs.

To ease tensions, I asked if the food was to their liking, then waited for a brief moment, there was no response; I could sense their anger. I then said, well you know Mr. Trump did win the presidential election and is the Commander-In-Chief of the United States of America, is he not. Roger (the single) responded with, “We don’t sanction his presidency and his cabinet is nothing more than a bunch of conservative extremists”. I responded, but half the American people do support the administration. He retorted, “Oh, you mean the deplorable”, I smiled and said you do realize the person who first used that insulting term to describe American people, lost the election. Tom enjoined, “Yes, but she did win with 3 million more votes”. I said well as you are probably aware Roger it’s the Electoral College that determines the victor, and Hillary still lost.

That last comment hit a nerve and Tom (the husband) shook his head and blurted out, “Had it been me, I would have been much more graphic toward those losers who voted for Trump”. All at the table realized that I was one of those losers. So I said, you sound like a typical east coast elitist liberal snob, and then asked the table, what is it that has filled each of you with so much animus and hate that you would insult the president and your fellow Americans? Cindy (the single) finally spoke, “Bob, I can’t speak for the others, but I don’t hate anybody, I just feel scared and uncertain for the future”.  I said now that’s a valid and reasonable opinion for having questions and certain reservations.

The conversation continued on in this vein, with Tom, Roger and Mandy bringing up just about every social and political issue of the day, using me as a soundboard to vent all their pent-up anger and frustrations; they criticized, cast unwarranted aspersions, made ad hominem attacks and I believe out of ignorance spoke outright falsehoods and inaccuracies toward President Trump, republicans, conservatives and Fox News. Every now and then I interjected a remark, one in particular really annoyed them; I asked where do you people get your news and information from? Wherever or whoever is spewing this nonsense is leading you down the wrong path.

We even discussed the Judge Kavanaugh disgraceful fiasco, they believed him guilty, I asked and what about the Constitution, innocent until proven guilty, does that mean anything to you. The response, believe it or not, was, I’ll paraphrase here, “it’s outdated and men have been abusing women for years, now it’s time they got their comeuppance”. And Mandy continued, ”we have to be certain that abortion rights are upheld and not threatened by some right-wing extremist”. That response proved to me that the Democrats and the resistance have weaponized the “Me Too” movement and women are now in a state of virtual victimhood, and life is cheap.

So as to avoid this turning into a throw down shouting match, not that other diners were oblivious to what went on, I sat by mostly in silence and patiently waited for the three to take a breath, cool down, and gather their thoughts. The only redeeming mind among the four was Cindy; she listened and at times smiled at some of my remarks.

At about ten in the evening as we neared the end of dinner, I felt it necessary to do a little venting of my own. I began by explaining how I never intended this get together to take the turn it did. But with the exception of Cindy, you three, people I know, have proven to me that there just might not be any hope that the divide in this country will anytime soon be healed. And by the way, I have yet to see anyone of you three even smile, your constant frowns are troubling and maybe a call for help.

What your remarks and insults have revealed is that, in my opinion, you are so filled with bitterness and anger, and care nothing about the truth and that you are ideologically driven to the point of fanaticism and desperation, and the results could very well be psychosis. I believe your facts are suspect, and your festering hatred of the president and conservatives is dangerous and un-American. There was nothing you said that was constructive or positive, and in any way meant to affect a meeting of the minds. And one other thing that you should consider, your fervor to maintain abortion rights means dead babies, is that something you want to think of as a cause célèbre?

We said our goodbyes; I sensed hostility in the air, the handshakes, and well wishes were brief and again there were no smiles. I’m certain they felt insulted and demeaned and although I would have preferred the evening turned out differently, it is what it is. I paid the check and went our separate ways.