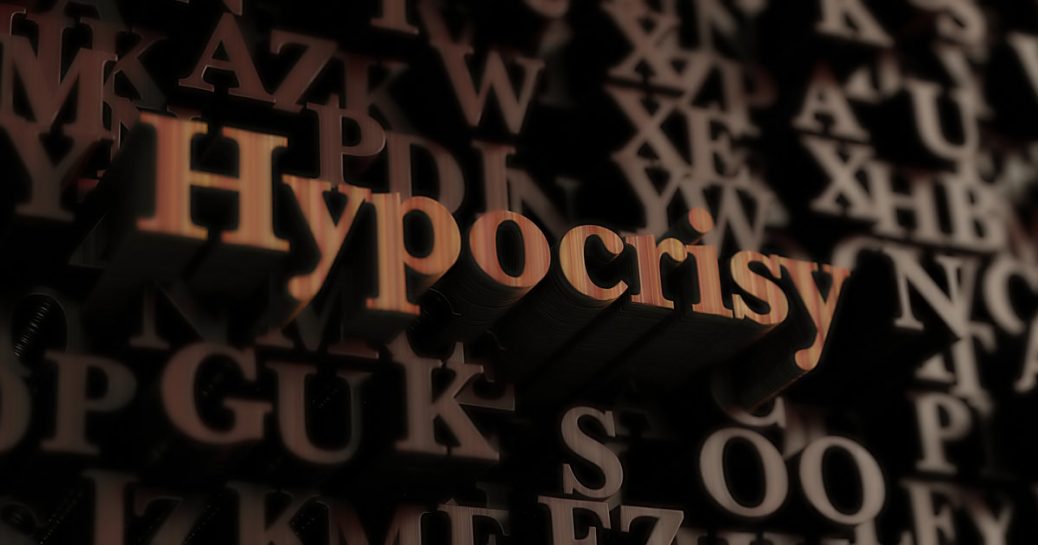 “A hypocrite is someone who says one thing and does another… but who doesn’t?”

This article is a reply to Robert W Peck from November 3, 2017, where he fretted about the Republican Party and called out The Hypocrisy of the Right.

Have you ever fallen short of your principles? Have you ever been angry, lusted or envied? If you claim the name of Jesus, then you are a hypocrite. You are a murderer, adulterer and thief. If you have violated one of the ten commandments then you are guilty of breaking all of them.

Unless you believe that being Christian and being perfect are two separate things.

Matthew 5:48 Be perfect, therefore, as your heavenly Father is perfect.

Maybe being a Christian is the process of being perfected. And could it be that our lack of perfection drives us to the saving grace of the Lord.

It is possible that you are being sanctified imperfectly. Your sanctification is a bumpy road. You may need to suffer the scars and bruises to become more like Christ. And your ultimate perfection may be in your glorification at the end of days. If that is the case, as you grow in Christ you will become more and more aware and sensitive to the few remaining sins in your life. That is a good thing.

When Robert Peck agrees with Jim Jamitis at RedState he fails to make the distinctions that are necessary to reason well. Redstate is filled with bitter people, discontent with their own ineptitude and mad the country for electing Donald Trump. They have an irrational personal animosity for Trump that clouds their thinking. Peck doesn’t recognize the difference between what Trump said and what Weinstein did.

When you criticize Kelly Anne Conway as a hypocrite you join the liberals in distorting what means to be a moral authority. The Access Hollywood video was recorded in 2005, and released as an October surprise to derail the Trump campaign. Conway defended Trump when he was accused of being a rapist because he bragged on a hot mic about what he could do to women but this is not evidence of sexual assault. Many people, even people that voted for Trump, were offended by his language, degradation and pomposity. But most people saw this political media stunt for what it was. It was in the context of a litany of attacks on Donald Trump as a misogynist and abusive man, which is what they say about every Republican.

Conway accused Hillary of supporting Weinstein because of her slow and tepid response to his alleged abuse of over 30 women and rape of 4+ women. This was a known pattern in Weinstein’s behavior and that of many other disgusting liberal men. These executives built a business on celebrating evil, violence and sexual perversion by catering to the populations base desires. Then they covered for themselves by courting Democrat politicians with wining and dining and donations. This was hush money in a protection racket that allowed Weinstein and others to continue their debauchery.

Conway was right to point out this hypocrisy. What Peck doesn’t realize or appreciate is that the real issue has shifted away from hypocrisy to the double standard applied to liberals.

Democrats don’t claim the mantle of Christ. They are attempting to destroy the foundations of the church. In fact the cloak themselves in mock religiosity when it suits them, picture Bill Clinton with his Bible after the Monica affair broke and Barack Obama citing scripture to the nodding heads of liberal Christians. “Yup, that’s in the Bible so I guess Obama must be right.” These are not really hypocrites, they are hardly wolves in sheep’s clothing, they are more like the butcher leading the sheep to slaughter instead of shearing.

I agree with Peck that the media is disrespectful of Donald Trump, but that’s not really the issue. The issue is not a media slight of Trump. It is the way that they are going about systematically attempting to destroy him as a means of destroying the USA and by extension the church and our families. Peck’s false comparison between conservative media’s mocking of Obama and the liberal media’s attacks on Trump is telling.

We never protested the election of Obama with a Resist movement. We never sowed seeds of a false dossier or trumped up impeachment charges. The birther movement was marginal. The real issues were even deeper than Obama’s attempts to orchestrate a movement against the second amendment with Fast and Furious and the persecution of the Tea Party by the IRS. Obama was attempting to fundamentally transform America, and he succeeded in many ways.

It is the obligation of Christians to speak out and even ridicule unjust and immoral leaders. Mayhew offered his reading of the Bible in 1750 when he said “Rebellion to tyrants is obedience to God.” Romans 13 needs to be read in context. The Bible celebrates just leaders, and heroic judges such as Gideon, Barak, Samson, and Jephthah. And the Lord throws down unjust rulers in his time.

1 Peter 2:13 “Submit yourselves for the Lord’s sake to every authority…”

The qualification “for the Lord’s sake” does not recommend or require that we participate with an evil government in the destruction of righteousness.

This is not about tribalism or “our guy.” It is weak and limp wristed to claim that people who defend Trump only do it because he is a Republican. First, we all know about Trump’s sorted past and history with political parties. He’s not a movement conservative Republican. Second, the Republican brand is damaged by media slander and the ineptitude of members of the GOP to advance a cogent platform based on the adherence to principle that will enact the changes necessary to reform the relationship between government and citizen. Third, we who defend Trump do so not because of loyalty to a man but because of loyalty to our country. We are patriots to believe that Trump was greatly preferred to Hillary and has a litany of accomplishments that move the ball in our direction instead of conceding defeat by aiding and abetting the desecration of this nation.

Peck is correct, Republicans have not shrunk the government programs, agencies, spending and debt. What a brilliant observation. They campaign with promises they promptly forget or abandon once elected. That’s the textbook definition of hypocrisy above. This is the establishment at work. And while Trump (with a background in real estate development) doesn’t mind debt, especially when you “owe” money to yourself and China, the Congress has ingratiated themselves with the government dole.

There is no doubt that it will take more Republicans than Democrats to put this genie back in the bottle. The upcoming December 12th election for Judge Roy Moore gives us an opportunity to advance against the powers of darkness. All Republicans worth their salt should help get more men like Moore elected.

Peck is right that Christians need to step up. However, his argument for accountability reeks of others that allow pagans to get away with being pagan because like children we shouldn’t expect too much from them. The truth is that we are all held accountable for what we know and do. It’s bad when Christians don’t do Christian things, a sin of omission. It is worse when the children of the Devil do demonic things, a sin of spite. But even this is not as bad a Christians doing unchristian things, a sin of commission. This is what Dennis Prager means when he says that the 4th command is to “not carry the Lord’s name in vain.”

Matthew 10:14 If anyone will not welcome you or listen to your words, leave that home or town and shake the dust off your feet. 15 Truly I tell you, it will be more bearable for Sodom and Gomorrah on the day of judgment than for that town.

Luke 12:48 For unto whomsoever much is given, of him shall be much required.

Peck’s most cogent argument is found in his conclusion. But, he’s still incorrect in terms of his assessment of our next steps. He essentially supports a third-party movement without saying so. This new party will be pure and true, based on principles and standards. Good luck Bob! Let’s see how that works out for you! It’s been tried and failed.

I’ve had this debate about the failure of the GOP hundreds of times. My response is three-fold.

1) Principles are what you hold to, independent of the place you work, worship or vote. You then instill in the groups you are a part of. You can join a group that holds to most of what you believe in order to work toward common goals. Many churches fall in this category. And the Republican party is no different.

2) Compromise is necessary in any group you participate in. That doesn’t mean that you give up your principles, but you find common ground with people you can work with. This is Reagan’s “half a loaf” argument. You may cringe when you hear it and hate it, but that is the way that sausage is made. You can despise it, but opting out will only endorse the principles you oppose. See 1).

3) If you can’t find common ground with a party or system that is harmful then you have a few options: a) start a new party (see above), b) take over the existing party (the Trump method) or c) revolt and start a new nation.

The Trump method as a model for reform and his current leadership provide us an opportunity to save this nation. The Constitution is durable, our spirit indomitable and the church and His truth is marching on… and the gates of hell will not prevail.