We Are Losing Our Religious Liberties 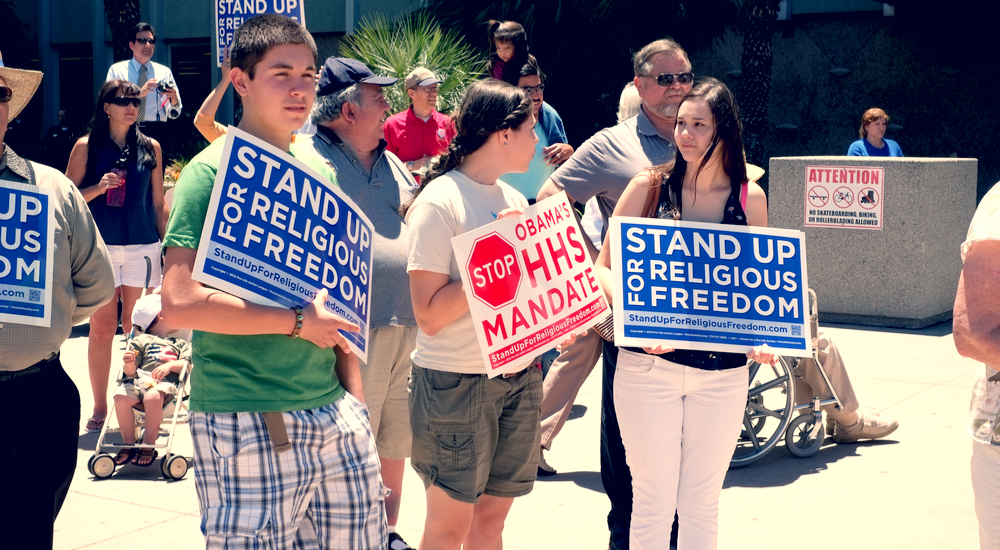 We Are Losing Our Religious Liberties — Part 1

Foundational Scripture: Isaiah 5:20  Woe unto them that call evil good, and good evil; that put darkness for light, and light for darkness; that put bitter for sweet, and sweet for bitter!

We have been seeing our liberties, virtually all of them, come under attack in the last few years.  Our religious liberties, the one that our Founders believed was the most important, has taken a serious downturn in the last few years.  We don’t have to look very hard to see that islam has more freedoms in America today than the Christian faith that 80%+ of us grew up under.  We have been losing them little by little since 1947 with the Evers vs Board of Education.  Since that time we have had our religious freedoms taken from us and the church has done little to nothing to get them back.  Most of these ‘laws’ have been issued by the courts, which have no authority to make laws but as Justice Elena Kagan stated: “We’re not supposed to legislate from the bench but we do it all the time.”

We have seen the Christian religious expressions in public outlawed but not Islamic expression.  They block many street locations in New York City and other places for their prayers, but a Christian is refrained from praying in public for almost any reason.  In 2006 a friend of mine, Chaplin Gordon Klingenschimdt was court martialed for praying in public and ending the prayer in Jesus’ Name.  This is a man of God praying in the manner that his religion dictates and was removed from the military.  It is getting worse every day it seems. Schools today can teach the 7 pillars of islam, have the students memorize a verse out of the koran, take on an Islamic name but they won’t even hang a picture of Jesus in that same school and if they did the same with the Christian faith there would be lawsuits everywhere.

This is not what our Founders intended for America.  They believed that the Christian faith was the best foundation for society, business and government.  They defended the right to live and operate under Christian principles in all arenas specifically the public arena.  They believed that a Christian society should show their faith at all times.  Even foreigners who visited America were amazed at how embedded our Christian faith was in society.  In my book Defining America’s Exceptionalism I have a comment made by Alexis De Tocqueville concerning our religious freedoms: “America would not be what it is without the religious liberties demanded by the Founders.  This liberty was not just for the Christian religion but all religions.  Our religious liberty and religious culture is what still defines America today just as much as our political and economical system.  In “Democracy in America”, Alexis de Tocqueville explains the importance of religious liberty: “Freedom sees in religion the companion of its struggles and its triumphs, the cradle of its infancy, the divine source of its rights. It considers religion as the safeguard of mores; and mores as the guarantee of laws and the pledge of its duration.” He also stated: “Religion is no less the companion of liberty in all its battles and its triumphs; the cradle of its infancy, and the divine source of its claims.  The safeguard of morality is religion and morality is the best security of law and the surest pledge of freedom”.” 1

Our Courts have chipped away at these religious freedoms to the point that today we may see churches forced to violate their Christian principles to keep the doors open.  We are already seeing Christian businesses shut down and financially punished for standing up for their religious freedoms we used to have.  We have to see how the early courts addressed these issues to understand how far to the left our courts and society itself has drifted.  In a case from 1811, The People vs Ruggles a person blasphemed Jesus and was taken to court. The case is described as follows: “The defendant was indicted . . . for that he did . . .wickedly, maliciously, and blasphemously utter and with a loud voice publish in the presence and hearing of divers good and Christian people, of and concerning the Christian religion, and of and concerning Jesus Christ, the false, scandalous, malicious, wicked and blasphemous words following: “Jesus Christ was a bastard and his mother mustbe a whore,” in contempt of the Christian religion . . . [T]he defendant was r=tried and found guilty and was sentenced by the court to be imprisoned for three months and to pay a fine of $500.” 2 In today’s courts this case would be thrown out but our Founders looked at this in a much different light.  The opinion was written by Chief Justice James Kent author of Commentaries on American Law which became the standard for American law and he is considered one of the Fathers of American Jurisprudence.  In his opinion he states: “Nothing could be more offensive to the virtuous part of the community, or more injurious to the tender morals of the young, than to declare such profanity lawful.

The free, equal, and undisturbed enjoyment of religious opinion, whatever it may be, and free and descent discussions on any religious subject, is granted and secured; but to revile . . . the religion professed by almost the whole community is an abuse of that right.  We are a Christian people and the morality of the country is deeply engrafted upon Christianity and not upon the doctrines or worship of those impostors [other religions].  We are a people of manners and whose morals have been elevated and inspired by means of the Christian religion.  Though the Constitution has discarded religious establishments, it does not forbid judicial cognizance of those offenses against religion and morality which have no reference to any such establishment. . . This [constitutional] declaration (noble and magnanimous ad it is, when duly understood) never meant to withdraw religion in general, and with it the best Sanctions of moral and social obligation from all consideration and notice of the law. . . To construe it [the Constitution] as breaking down the common law barriers against licentious, wanton, and impious attacks upon Christianity itself, would be an enormous perversion of its meaning.” 3  Notice that because we are a Christian people this kind of attack against that religion was not acceptable according to the Founders and the men that are considered to be the fathers of American law.  They believed that this behavior should not be allowed even though we have free speech and freedom of religion which also allows us to have no religion.

In the case of Commonwealth vs Abner Kneeland in 1838, which is similar to the Ruggles case except it was for something put in print rather than something spoken, Abner Kneeland put into print his ‘belief’ that the story of Christ was “a fable and fiction.”  He was prosecuted for libel! This is interesting because he was libeling God!  In a comment from US Supreme Court Justice and Father of American Jurisprudence Joseph Story we see that free speech is only allowed when it is truth: “Congress shall make no law abridging the freedom of speech, or of the press.”  That this Amendment was intended to secure to every citizen an absolute right to speak, or write, or print whatever he might please without any responsibility, public or private, therefore is a supposition too wild to be indulged by any rational man.  This would allow every citizen a right to destroy at his pleasure the reputation, the peace, the prosperity, and even the personal safety of every other citizen” 4

Today the Christian faith is under attack from the homosexual community.  We are being called bigots, haters, racists and many other names simply because we stand for the moral principles our Founders lived by.

All scripture is KJV unless otherwise noted.