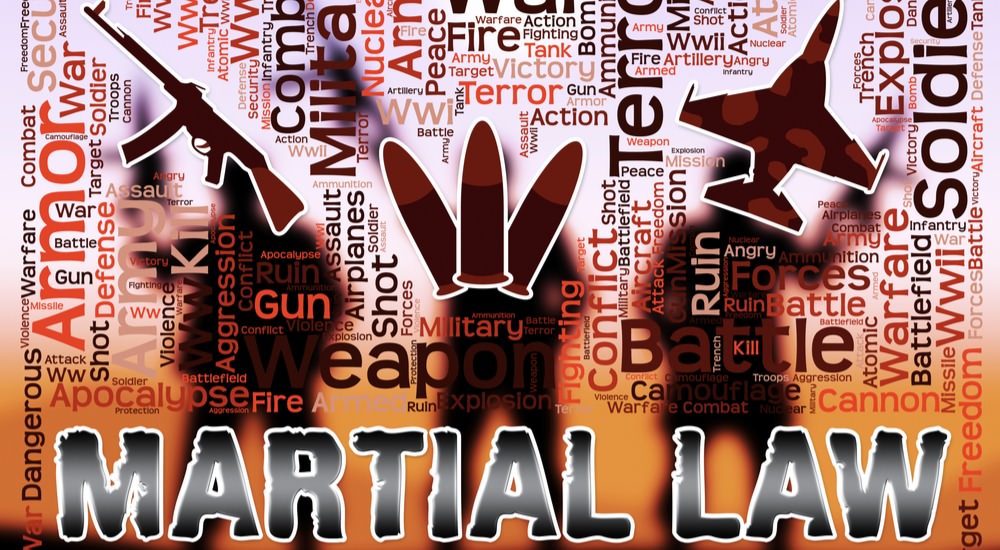 “Let No Man Deceive You!”

Western civilization, for decades, has experienced a steady deluge of the probable causes of Martial Law. Included are a gamut of natural disasters, various EMP scenarios from solar as well as geopolitical causes, and riots only foreign UN troops can manage with America’s National Guard sent away to diligently guard Bush’s poppy crops, and more.

Indeed, America’s infrastructure can take little more of “natural” disasters, all too often coordinated with the Chicago Mercantile Exhchange “weather derivative” profiteer investors, in league with HAARP, Blackwater, and weaponized warfare HAARP antagonisms. Once a “natural” flood, drought, or tornado appears, the globalists not only collect their derivative winnings, but buy up the ruined real estate and re-sell to foreigners for 16% profit.

EMP attacks are also very possible. Very few have not heard, by now, that up to 90% of America’s population would die, in the 12 months following an EMP attack. Already in the 1990s, FBI manuals taught the possibility of Russia sending EMP missiles over Canada into the United States. Already in 2005 Iranian war journals revealed Iran was practicing for an EMP strike to be launched from the Gulf of Mexico.

Added to this are out-of-control riots! The Crips and Bloods uniting with Nation of Islam as shock troops and terrorists! And the awakened pre-positioned sleepers of militant Chinese, Russians and Chechnyans -along with in-place regional and state police from Estonia, Latvia and Lithuania – are all well-contrived causes for Martial Law in America!

But with all the above possibilities and any combination thereof, Vigileaks strongly holds the conviction that the primary cause for Martial Law in America will be UFOs.  Add then, as criminal-UN supporting Kissinger said, Americans will gladly trade their freedom for security.  (To which the John Wayne in every true American responds, “That’ll be the day.”)

This is because not only are the UFOs all ready to go, but because the globalists minimally tolerate the destruction of their hard work, with billions upon billions, put into global infrastructure, to technologically enslave all into world government. A colossal UFO pandemic scare in North America could preserve their treachery and induce Martial Law…

For decades, the Gramscian game plan has been to give the world a major external and internal threat, to bring cohesion to all countries. Decades ago, the game plan was that the environment should be the global internal threat. Pollution is borderless, for example, so a central world govt. is needed to deal with it (the globalist manufacturers keep polluting, by the way, with this in mind).

But the major external threat was agreed upon to be UFOs. Hitler’s UFO technology was brought to MIT USAF officers in Washington state in 1945. The Kenneth Arnold sightings were a cover for the government moving them in 1947. Today, YouTube is overflowing with videos of UFO sightings and, of course, not all are CGI.  These up-to-the minute YouTube presentations are equivalent, in social-engineering effect,  to real radio bulletins of the 1930s just preceding the War of the Worlds fiasco and mind control.

The bottom line? Socialist H. G. Wells and Orson Welles met for the first time in late October, 1940. The War of the Worlds contrived by Wells and performed on radio by Welles, was in retrospect a beta version, a pilot program, for what will soon happen, as foreign UN troops come in to be America’s “protectorate.” Don’t fall for this! Yes, the UFOs will be real – Orson Welles-like media will heighten and intensify – but it is a highly-sophisticated management-by-crisis globalist ploy to conquer you!

From H.G. Wells on – who wrote the socialist New Worlds for Old – the spirit behind the UFO scare is socialist.  Its ultimate socialist agenda is to unite all countries into a socialist world government, which tramples and destroys the United States Constitution.

The FDR New Deal script was improved on by Obama. The War of the Worlds script will be improved on by Fake News media. Don’t fall for it! Prepare now to not be manipulated by media mind control! And don’t buy the excuse that, “Christians around the world have disappeared! This undesirable element of fundamentalist resistance, remnant of the Age of Pisces, have been removed. And you will be, too, unless you enter the Age of Aquarius, as the globe unites against further UFO threats to mankind.”

Should a pre-Trib Rapture occur, more will then disappear soon after as slaves and servants in the myriad of underground bases, tunnels and cities revealed by Dr. Richard Sauder.