An annual review of economic freedom shows that America’s place in the world has dropped like a rock under the disastrous Joe Biden administration.

The Fraser Institute’s Economic Freedom of the World 2022 report which was just released this month and it found that the U.S. has fallen to lows it hasn’t seen since the bad old days of Jimmy Carter. 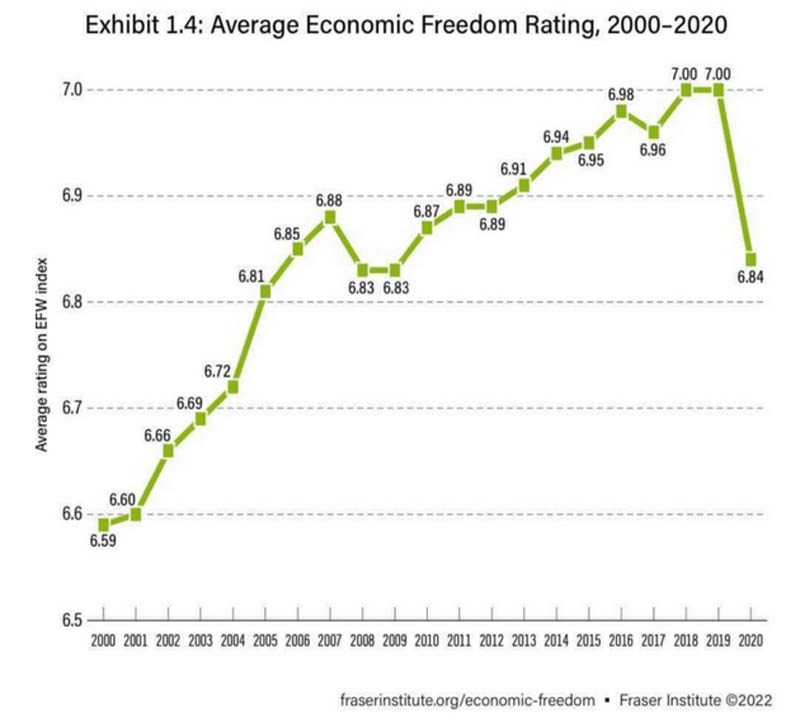 Many will be surprised that the United States is not at the top of the list of most-free countries. In 2020 the US was seventh, behind Hong Kong, Singapore, Switzerland, New Zealand, Denmark, and Australia. And while seventh in the world is nothing to sneeze at, the US trajectory has been downward for quite some time, if only moderately so. In 1980 and 1990, the US was the second economically freest nation in the world. In 2000, it was third. In 2010 and 2015 it was fifth and sixth, respectively. And by 2020, it was seventh.

But that only tells part of the story. It’s when we look at ratings rather than rankings that things get interesting. While the United States has been kicking around in the top ten, even if falling, for decades, it is not doing all that well when compared to itself over time. Indeed, the US’s cumulative rating of 7.97 is considerably lower than its 1980 rating of 8.34. Digging into the recent data, the United States dropped in rank across all five indexed categories from 2019 to 2020. The most significant changes have been in the size of government and regulation categories, where the United States fell 7.32 to 6.79, and 8.68 to 8.11, respectively. Both measures directly reflect the COVID era’s unprecedented expansions of government, as federal spending was unleashed from any semblance of fiscal constraint and draconian regulatory intrusions on daily economic life reached every single American.

In short, the United States finished 2020 less economically free than we were at the tail end of the Carter years.

Jimmy Carter was a hapless moron, of course. He didn’t have the smarts to lead this nation. But you can be sure that Biden will succeed in being worse than Jimmah.

Joe Bided is the most destructive president in U.S. history and he’ll continue to prove it.