Are Trump and Universities Headed for a Mexican Standoff? 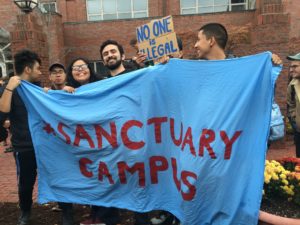 Things are going to get very interesting, very quickly. At virtually ever post-election speech, Donald Trump continues to emphasize the point of building the wall along our Southern border. He has also reiterated his hard-line stance of ending sanctuary cities. And he’s not the only one. States are following his lead.

On December 1st, Texas Governor Greg Abbott tweeted  that, “Texas will not tolerate sanctuary campuses or cities. I will cut funding for any state campus if it establishes sanctuary status.”

Meanwhile, major and prestigious universities are girding their loins in preparation for a government crackdown. Harvard University and the University of California have formally announced that they will not comply should Trump follow through with this threat – which, by the way, is not a threat. What it is, is a decision by the president-elect to finally enforce Constitutional and legally passed federal immigration laws.

Yet former Director of Homeland Security, and now president of the University of California, Janet Napolitano, has mandated that her office will, “vigorously protect the privacy and civil rights of the undocumented members of the UC community and will direct its police departments not to undertake joint efforts with any government agencies to enforce federal immigration law.”

Yes, the former director of Homeland Security, the person charged with “protecting” our nation from invaders, has made the conscious decision to illegally shield those very invaders. But considering how well she performed her federal duties, we should expect nothing less, or more, depending on your perspective.

Napolitano also attempted to legitimize her lawless decision, by stating that, “Prioritizing the use of resources in law enforcement is nothing new. It is known as ‘prosecutorial discretion,’ and we can see it all around us…” Wrongo Janet! There is no federal law which stipulates that allowing a certain amount of illegals to stay in this country is okay, or permitting them to enter illegally in

the first place. That’s not up for debate or “discretion.”

Harvard University is taking an identical stance. Harvard President Drew Gilpin Faust said that, “the Harvard University Police Department would not cooperate with federal immigration officials without a warrant, and that the university would be making additional legal resources available to illegal aliens affiliated with Harvard.”

This radical hard line stance is evidently shared by other Harvard pointy-heads, as “the dean of Harvard College, Rakesh Khurana, ‘will prioritize protecting Harvard’s undocumented undergraduates.’”

The New York Sun  quotes the Harvard Crimson, who reports that a petition circulated throughout the school has already garnered over 4,000 signatures and the endorsement of three academic departments in favor of shielding illegals.

The petition is “demanding that Harvard ‘create an office specifically meant to cater to undocumented student needs.’” Don’t you just love liberals. They never make requests – but always make demands, like some hostage taker.

They are also the first to applaud illegal unilateral action from their leftist president Obama, when he “can’t wait on Congress to get things done,” yet bemoan and refuse to comply with what they describe as unilaterally making immigration policy by president-elect Trump. This, to any reasonable person, is a non-issue, as Trump clearly has the law on his side.

But then again, I didn’t attend Harvard Law. Maybe they teach them something other than upholding long-standing federal immigration law there.

As I said – things are going to get very interesting very soon.