If Trump Is King Cyrus, What Does it Say About the American Church? 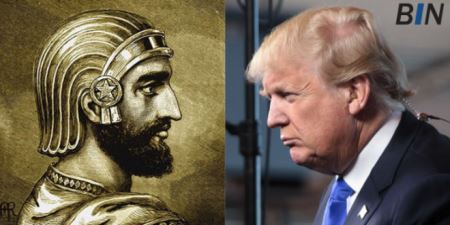 During the 2016 Presidential election, a number of Christian personalities began making a comparison between the ancient Persian King, Cyrus, a heathen king who God used to release the Jews from their Babylonian captivity, and Donald Trump as a potential modern-day deliverer of American Christians.

It seems that idea is still in vogue, at least in some circles.

That article referenced another article and both referenced various Christian personalities who are all keeping the Cyrus appellation alive.

I’m not claiming special prophetic revelation on the matter like some have intimated, but I do find myself compelled to comment on the applicability and significance of drawing a parallel between President Trump and King Cyrus.

Temple coin bearing the images of Donald Trump and King Cyrus recently minted by the nascent Sanhedrin and the Mikdash (Temple) Educational Center to honor President Trump for his recognition of Jerusalem as the capitol of Israel.

First of all, before using the King Cyrus analogy, I believe we should all consider, and make clear, whether we mean:

A) Donald Trump is a direct parallel to King Cyrus, being to American Christians what the ancient Persian King was to the exiled Jews, and that this scriptural reference is being used in correct context with the same spiritual events and principles applying to the church in America today as applied to Israel of old, or;

B) Cyrus is proof that when God’s people get so screwed up and so out of touch with Him that He cannot deliver them out of the hand of their enemies through their own judges, prophets, kings, etc, then God is able to use a heathen; an unbeliever; an outsider to loose his people from their oppression so they can return to serving their God like they were supposed to be doing in the first place, or;

If we mean “A,” a direct parallel, as those touting the notion seem to be indicating, then for Donald Trump to be the deliverer of modern American Christians, it would mean we first must be in captivity. For the parallel to fit, it would mean being in captivity to a godless government of heathen people because we, the church, like ancient Israel, forsook our God, rejected His many warnings, and ultimately suffered the just judgment.

Interestingly, God said it was His own people who “sold themselves” into the Babylonian captivity for their iniquities (Isa 50:1 and 52:3). If the parallel fits, and if the church in America has been suffering in captivity under the oppression of heathen rule, then it is because we “sold ourselves for our iniquities.”

But if Trump is the deliverer, then who have the oppressors been? Most on the Christian-conservative-right would say, “the liberal Democrats.” However, a couple years ago I did some research and discovered that over the past 20 years, Republicans had held 57% of the control of our federal government – 68% if you count the Supreme Court. At that time, Republicans held complete control in 23 of the union states as compared to only 7 for the Democrats. That number is now 26 Republican states to 8 Democratic.

Something to keep in mind is that though King Cyrus released the Jews to return to their homeland to rebuild the temple and renew their prescribed form of worship under the old covenant, the full nation of Israel was never restored and only a portion of the Jews actually returned. The area that the repatriated Jews inhabited existed primarily as a self-governing region within various heathen kingdoms from that time until Jerusalem’s ultimate demise under the Romans in 70AD. So, if the current affairs are a direct parallel, then it doesn’t bode well for the church or the nation.

Therefore, if we are saying that Trump is a deliverer of the modern American church in true parallel to ancient Israel and King Cyrus, then rather than adulation for Mr. Trump, and jubilation for ourselves, the church should be hanging its head in shame and morning with our face to the ground as we come to the horrific realization that we, the church, have forsaken our God, played the harlot, sold ourselves into the captivity that we’ve been suffering under, and have even been using the ballot box to authorize by our own hand the godless, heathen oppressors who have ruled over us.

On the other hand, if we mean option “B,” then we have just about as much cause for shame. Option “B” means that we, the church, are so backslidden, so out of touch with God and His ways, and have been so deaf to His voice and His warnings that God has had to go outside the church to find someone that He can use to loose His people from their oppression. That’s pretty bad. If this is the case, then God may be using Mr. Trump as a stop-gap measure to provide us a temporary reprieve that the church should be using as an opportunity to repent, turn back to God, and receive His loving correction as we turn from the horrific folly that we evidently have engaged in to get ourselves into such a predicament.

Finally, if we mean option “C,” that President Trump is just “kinda sorta” like Cyrus in that he may not be Christian, but we think God might use him anyway to kinda sorta make things a little better for us, then we’re really just grasping at theological straws with the whole Trump/Cyrus thing and need to admit it and stop using scripture out of context to fabricate some new doctrine.

Personally, I don’t believe the church in America has fallen to the same depths of depravity and desolation as ancient Israel – serving idols, sold into captivity, and the temple lying in ruin. However, neither have we been the shining city on a hill that we ought to be.

So, how do I view the church and Mr. Trump? Glad you asked. I view the church as the foolish girl who’s loving father has instructed her what kind of boys to date and what kind of man to marry. But, instead, she has dated and run after all the wrong boys for all the wrong reasons of money, popularity, and position and ended up marrying someone who doesn’t fit the criteria admonished by her father and now she’s using her father’s words out of context to try to make herself feel good about what she’s done. Nevertheless, a father with unending love for his daughter will, as much as the daughter and son-in-law allow, work with and through that son-in-law to provide his daughter the best life she can have. In that way, I believe God quite likely is working with and through President Trump for the sake of the church.

And please let me make clear that I am not belittling or reviling President Trump by referring to him as a heathen or an unbeliever. For the Cyrus analogy to fit, he would have to be a heathen, i.e., an unbeliever, or one outside of God’s covenant people, and that’s precisely why the Cyrus comparison was chosen in the first place. Nevertheless, some now claim to be privy to the fact that Mr. Trump has prayed a salvation prayer, which would please me just fine as God wants all men to be saved and to come to the knowledge of the truth, including President Trump, former President Obama, and Hillary too.

Ultimately, either the Trump/Cyrus parallel fits and is a grievous indictment as to the horrific state that the American church has fallen into, or, it’s kinda sorta just a bunch of theological hokum set to a scriptural tune so we can all feel good about what we’ve done. Either way, repentance is in order and the church in America would do well to do what the Israelites failed to do – return to wholehearted devotion to our God before we sell ourselves into captivity, and trust Him enough to just do what He says is right.