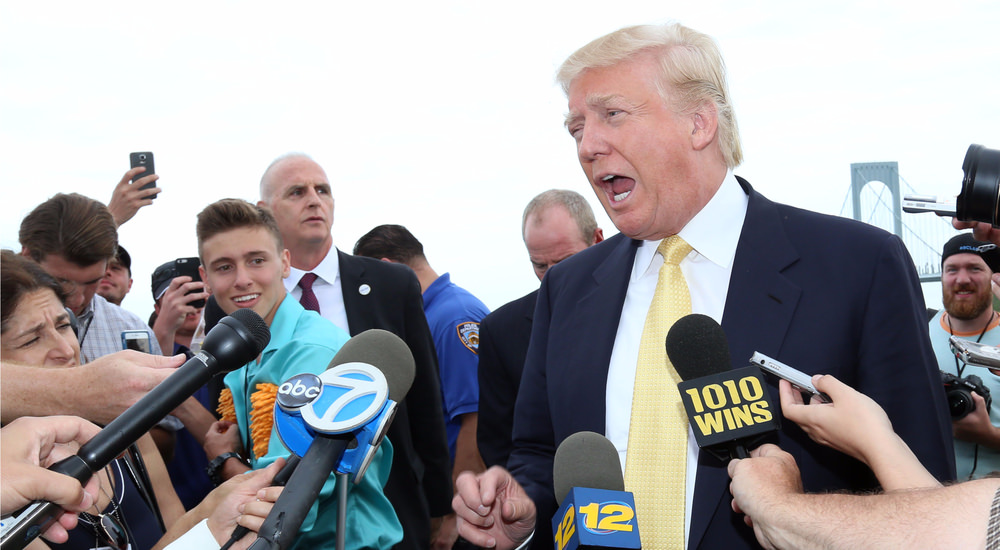 President Donald Trump’s “war” on journalist is a farce. All Trump is doing is calling out those in the mainstream media who are part of the alt-left fake news network; he has nothing against those media outlets that do honest work.

Barack Obama has set the precedent for the way presidents treat journalists and reporters and Trump is just following his lead. Obama as president has thrown “alleged” whistle-blowers in jail and has harassed government officials who speak to the media for just answering simple questions.

I haven’t heard any member of the MSM bring this fact up when criticizing Trump’s relationship with the media. Surely the media can’t be that forgiving of the Obama administration and its Department of Justice for sending journalists to jail and subpoenaing their phone and email records just for doing their job.

Government officials are increasingly afraid to talk to the press for fear of being not only being accused of leaking information, but being falsely prosecuted as a leaker. The Obama administration has created a culture within itself which if someone is “suspected” of talking to reporters, they will be subjected to investigation, including lie-detector tests and scrutiny of their telephone and e-mails.

But what does the Obama administration consider to be “whistle-blowing”? And “leaking”? Exposing “waste, fraud and abuse” is considered to be whistle-blowing. Exposing questionable government policies and actions, whether illegal or unconstitutional, is leaking.

According to veteran national security journalist R. Jeffrey Smith of the Center for Public Integrity, many government officials are “reluctant to discuss even unclassified information” with journalists anymore.

Associated Press President Gary Pruitt said in an interview with CBS News’ “Face the Nation,” “I don’t know what their [the DOJ] motive is,” but, Pruitt added, “I know what the message being sent is: If you talk to the press, we’re going after you.”

David E. Sanger, veteran chief Washington correspondent of The New York Times hit the nail on the head when he said, “This is the most closed, control freak administration I’ve ever covered.”

In an interview with Rutgers The Daily Targum, Obama said rather begrudgingly when confronted with his record of being “more severe” when “prosecuting government employees who leaked information to journalists” that, “I am a strong believer in the First Amendment and the need for journalists to pursue every lead and every angle.”

It would have been nice if the aspiring journalist and Editor-in-Chief Dan Corey would’ve asked a follow up question. Corey just let Obama off the hook and didn’t press him for the answer Americans deserve. This is just the kind of journalism which damages reporters who try to do legitimate work.

Obama has had the FBI spy on journalists and his Attorney General [Eric Holder] has used intrusive measures such as subpoenaing phone records in order to gain information illegally such as in the case of the AP. Thanks to the Espionage Act, a relic of World War I-era red-baiting, the Obama administration has been able to prosecute nine cases involving whistle-blowers and leakers, compared with only three by all previous administrations combined.

The Obama administration wanted payback for the AP’s investigation into a May 7, 2012, story revealing the CIA’s covert operation in Yemen. The DOJ, a year later had secretly subpoenaed and seized all records for 20 AP telephone lines and switchboards for April and May of 2012 even though only five AP reporters and an editor were involved in the Yemen story. They also seized the records of more than 100 AP journalists’ phones used in the newsrooms including their home and mobile phones and secretly served the subpoena for the records directly to telephone companies without notifying the AP.

What happened in the year between the release of the AP story and the DOJ’s aggressive investigations a year later?  According to a post on the Committee to Protect Journalists (CPJ) website titled “Leak investigations and Surveillance in Post-9/11 America” by Leonard Downie Jr. and Sara Rafsky, Republicans in Congress and conservative pundits loudly accused the administration of purposely leaking classified information used in the AP story to embellish Obama’s counterterrorism credentials in an election year. The Committee to Protect Journalists is an American independent non-profit, non-governmental organization which promotes press freedom and defends the rights of journalists.

The AP example is just one of many examples of how the Obama administration has tried to stop the press from doing its job.

The Justice Department seized phone records and emails sent to a private account of Fox News’ chief Washington correspondent, James Rosen, in an investigation into a 2009 story about United Nation sanctions and North Korea’s nuclear program.

The DOJ claims that Mr. Rosen may have “aided and abetted” in trying to force his source to give him [Rosen] classified information. The FBI also had “probable cause” to believe that Mr. Rosen has violated a provision in U.S. law prohibiting unauthorized disclosure of defense information.”

There are some good journalists out there doing their job, but between the government prosecuting journalists and those who speak to them and the alt-left fake news network giving journalists a bad name, our freedom of the press (protected by the First Amendment) is deteriorating.

In America, a country which is known as a defender of freedom of speech and freedom of press, we are doing a bad job of holding ourselves to that standard. In the 2016 Reporters without Borders World Press Freedom Index, America ranks 41, just below Slovenia and just above western Africa’s Burkina Faso (formerly Upper Volta); number one being Finland.