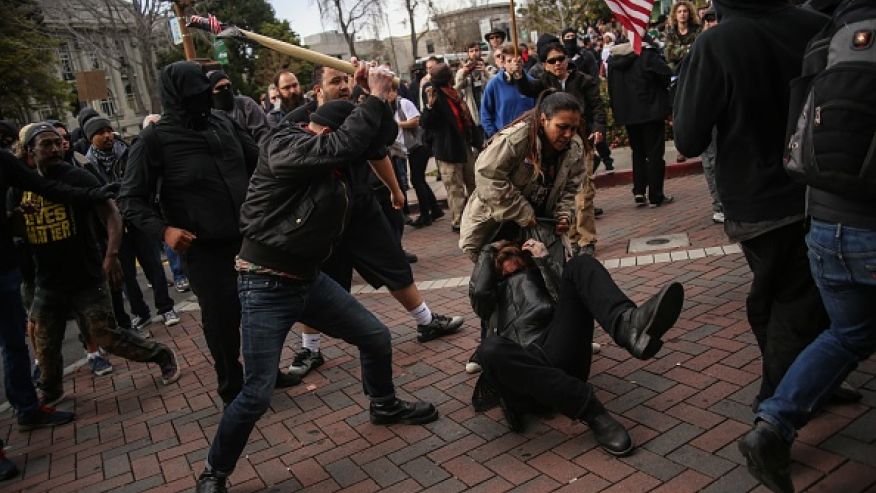 Ten people were arrested in Berkeley, California in the violence resulting when a peaceful pro-Trump demonstration was attacked by a violent anti-Trump group armed with three foot lengths of metal pipe, 2×4’s, baseball bats and pepper spray, the attack use of which is a felony in California. The items are now in the evidence lockers of the Berkeley Police Department.

“Some anti-Trump protesters threw things at Trump supporters. Berkeley police made occasional forays into the crowd, but mostly held back,” reported the Marin Independent Journal. “Protesters spilled out into Martin Luther King Junior Way and were fighting in the middle of the street, and there were people in fistfights on the sidewalks. Some had bloody faces. One pro-Trump supporter was sprayed in the face with Mace.” An elderly Trump supporter in a “Make America Great Again” hat was pepper-sprayed, causing him to collapse on the ground. His condition is unknown.

One month ago Berkeley was the location for the anti-Milo Yiannopoulos with complaints the police officers held back on instructions from the University of California Administrators. Meanwhile in Saint Paul, Minnesota there was a pro-Trump rally of 400 people who were set upon by 50 protesters and again, some violence occurred.

In Nashville, two people were arrested as protesters clashed with Trump supporters at the Tennessee Capitol. In Olympia, Washington four demonstrators were arrested at a support of Trump rally, for having assaulted a police officer. In all cases the anti-Trump people are claiming he is a fascist, Nazi, KKK carrying signs like “Your vote was a hate crime.”

Leading Democrats would have us believe anti-Trump people are spontaneous, but it seems far more likely they are led by paid “community organizers” employing tactics from Saul Alinsky’s book “Rules For Radicals.” If true this reeks of Barack Hussein Obama as it is his source and foundation. We say it is evil as:

The objective is to depose Donald J. Trump and re-install Barack Obama. This is unconstitutional and consistent with a man who ignored our Constitution at every turn. In addition: He is showing utter disregard for the young people who are executing the plan.

Many of these young people are committing, and getting arrested for felonies. Not only may they go to prison for long terms, and be stuck with huge fines they cannot retire in bankruptcy, but never get a government job, or private sector job with responsibility or even a low-paying job near a cash register. In other words, ruin their lives executing the plan of an insanely greedy, self-centered, narcissist for whom being President of the United States was not enough.